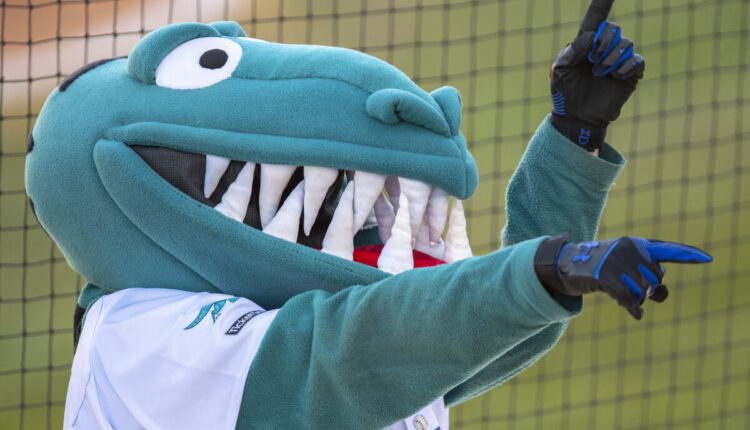 BRIAN WOLFER, Special to the Standard-Examiner

Oggie, the Ogden Raptors mascot, points at fans during opening night of the Pioneer Baseball League season Wednesday, May 25, 2022, at Lindquist Field in Ogden.

OGDEN — The Ogden Raptors and Boise Hawks played a game of cat-and-mouse for four innings with Boise applying pressure, then the Raptors flipped the script in the fifth inning, got a strong finish from starting pitcher Sam Burton and went on to win 7-2 in the first of a three-game series Wednesday at Lindquist Field.

Despite allowing zero hits through three innings, Burton played with fire by putting two baserunners on board with one or zero outs in each frame, walking three batters and hitting three more.

In the third, he hit a batter and walked another to begin the frame. But with runners on the move, Boise third baseman Raymond Gil lined one up the middle where Ogden second baseman Dakota Conners was ranging with runners stealing. Conners snagged the lineout, stepped on second to double up the lead runner, then threw to first for a triple play.

That preserved a 1-0 lead for Ogden earned on a Josh Broughton RBI single in the third.

Burton’s luck appeared to run out in the fourth but a key defensive play limited the damage. Jacob Cruce led off the frame with a solo homer, then a walk and a double set up the Hawks with two in scoring position. Former Raptors catcher Sean Skelly singled to left field, scoring the go-ahead run, but a Pat Adams-to-Jesus Valdez-to-Sonny Ulliana relay threw out Myles Harris at the plate to keep the score 2-1.

Into the fifth, the Raptors had totaled only three hits against Boise starter Gavin Gorrell but that quickly changed. Ogden ripped four consecutive hits to begin the bottom of the fifth: Conners doubled down the left-field line, then Ulliana and Adams singled to score Conners and tie the game 2-2. Broughton then singled to load the bases.

Ulliana scored on a wild pitch and Dustyn Macaluso drove into Adams on a sacrifice fly for a 4-2 Ogden advantage. With Broughton on third, Reese Alexiades chopped a single over a drawn-in infield for a 5-2 lead.

Meanwhile, Burton settled in. He concluded his start with consecutive 1-2-3 innings and finished with a line of two runs on three hits in six innings.

The fourth proved to be Boise’s only run-scoring inning. Clearfield’s Chase Stratton gave up a single but struck out two in the seventh, Jorge Gonzalez faced four batters in the eighth, and new Raptors pitcher Brandon McCabe walked two with two outs before striking out Tyler Jorgensen to end the game.

Alexiades hit a sacrifice fly to score Broughton in the seventh and Broughton singled in Conners in the eighth to conclude Ogden’s scoring.

Broughton hit 4 for 5 with two RBIs and two runs in the leadoff spot. Conners, Adams and Jesus Valdez each tallied two hits.

The two teams play at 7 pm Thursday and Friday to conclude the series.

With two days off to start the week, Ogden enacted several roster changes.

The first is finishing the trade with Northern Colorado that sent pitcher Kida De La Cruz to the Owlz a few weeks ago for a player to be named later. That player is outfielder Brian Dansereau, who started in right field and hit in Ogden’s four-spot Wednesday, hitting 0 for 4. In 24 games with the Owlz, Dansereau hit .313 with a .402 on-base percentage, totaling four home runs , five triples, four doubles and 26 RBIs.

Ogden also added the aforementioned pitcher McCabe, who had a 1.05 ERA in 34 innings at NAIA Keizer University in Florida this season. The Raptors also signed utility player Mark Vierling, who played four college campaigns at Missouri and one more at St. Louis in the recently completed college season.

The Raptors let go two original-to-independent-era players in infielder Nick Michaels and right-hander Chris Campbell. Michaels was placed on revocable waivers, meaning if he rejoins the league the Raptors have first rights to sign him. Campbell was released.

Right-handed pitcher Dylan Pearce, who recently converted from bullpen to starter, was placed on the ineligible/injured list.