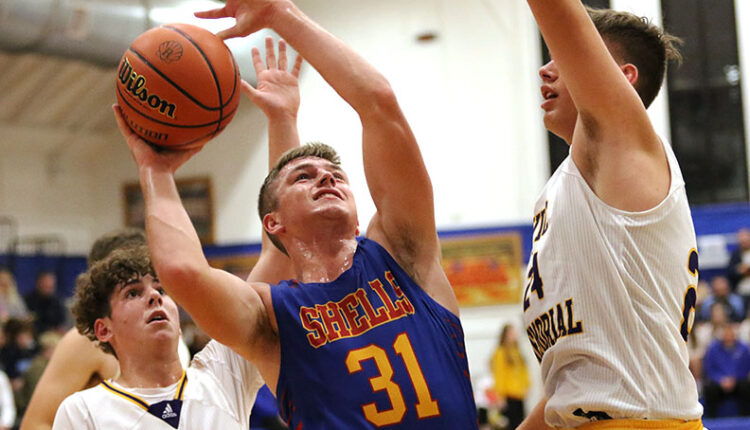 ROXANA – The Eagles’ first points for new coach Lee Green did not come until the second quarter in their debut Monday night.

“It feels real good, especially after Monday night,” Green said. “This wasn’t easy. Roxana kept playing, kept competing, made shots down the stretch. It was fun though.”

The Eagles overcame a nine-point deficit in the first half to beat the Roxana Shells 56-48 in Roxana’s second Hoopsgiving Classic at Milazzo Gym. CM, which lost to Centralia 58-30 on the tourney’s opening night, evens its record at 1-1 and will play Jersey in a silver bracket semifinal at 3 pm Friday. Roxana is 0-2 and will play North Greene in a ninth-place semifinal at 3 pm Friday in the junior high gym.

The Shells have defeated the Eagles just once in their last 14 games since 2012. But a 9-0 run starting with an Aidan Briggs basket and ending with a Briggs 3-pointer gave Roxana a 14-7 lead with 6:30 left in the first helped. CM halted that Shell surge when Dalton Buhs scored, but a basket by Ashton Noble and another Briggs field goal had the Eagles down 18-9 with five minutes remaining in the half.

But with Briggs on the bench after scoring 10 points in the game’s first 11 minutes, the Eagles rallied.

“He went off in the first half,” Green said of Briggs, a 6-foot-3 junior who finished with 14 points. “The foul trouble helped us. If he doesn’t get in foul trouble, we might have been down 15. … We had to make some hay while he was out, and we did.”

Down nine, CM began to run offense through 7-0 senior Sam Buckley in the low post and his three-point play sparked a 13-2 run that featured seven points from Buckley and an Adam Ogden 3-pointer to draw the Eagles even at 22-22 by half time.

“Everything’s new, we’re not really clicking right now,” said Green, coming off six seasons as Marquette Catholic girls basketball coach that produced 114 victories. “We just said, hey, we’ve got to get the ball inside to Sam. And even though they were in a zone, we had to get it in there and let him go to work. Then we started playing a little better defense, too.”

Momentum built closing the second quarter carried into the third for CM, which took a 39-31 lead to the fourth quarter. Ogden, a sophomore guard, led the Eagles with 17 points, one off his career high. Buckley scored 13 points, Dathan Greene had eight, August Frankford had seven and Buhs added six points for CM.

Joining Briggs in double figures for Roxana was Noble and Chris Walleck with 10 points apiece.

While Roxana begins its 22nd season under coach Mark Briggs, CM hits the weekend looking to give his new coach a second victory this weekend.