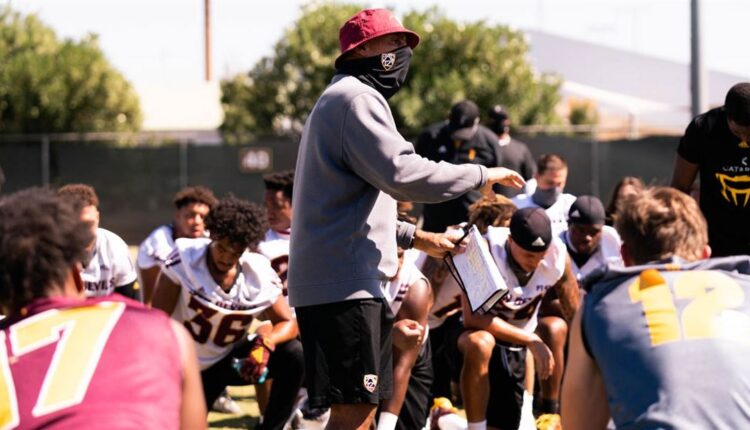 After Arizona State at what was then No. 23 BYU in Provo, Utah, their head coach Herm Edwards felt it was important to convene meetings with his coaching staff and team captains on Saturday, he said at his weekly press conference on Monday.

The Sun Devils commit 11.5 penalties per game in three competitions that are most tied in the FBS. They have been charged 16 times in Provo, most in an ASU game since 2006. Edward’s meetings with his players and coaches were held in hopes to contain this.

The Sun Devils were punished frequently during Saturday’s game. Their no-penalty errors were also ubiquitous, with a number of premature snaps and offensive players either lined up incorrectly or moving in the wrong direction on plays – an issue caused by a change in the way plays for this game in called and signaled were special.

The team’s 16 penalties were an astonishing sum, but it would have been even greater had it not been for four of them rejected.

Second quarterback Daniels was intercepted twice in the first half and threw more picks before break than in an entire game during his college career. The signal caller’s first revenue in year three resulted in a BYU touchdown; his second wasn’t as problematic as it was in third and twelfth place on BYU territory.

At the opening start of the game, second recipient Georg porter – played in place of newcomer DJ Taylor, who dropped out with an ankle injury – fumbled at the 12-yard line. BYU scored three games later. Junior linebacker Merlin Robertson intercepted a passport in the third quarter, but gave it away after a fumble deep in BYU territory.

“It’s us,” said Edwards. “It really was us. We played against each other. We put ourselves in a bad position offensively and defensively. We gave them yards that weren’t earned by a piece. It was that we misfired and took a stupid penalty kick. “

Eleven fouls by the Sun Devils on Saturday were blamed on their offensive. In the third and fourth quarters, they crippled themselves from false starts, some of which either pegged them deep into their own territory or kept them long behind the chains. False alarms, which Edwards attributed to the noise at LaVell Edwards Stadium, were also abundant.

Edwards said he had a meeting with his offensive staff to discuss the bugs. He believes the problems have been fixed.

“We had a long talk with the offensive staff,” said Edwards. “I can’t tell you exactly what was being discussed, but I’m pretty sure we fixed that. We solved that and it should never be an issue for us again. I think we all agree on what has to happen and take place. “

It was a shocking amount of fighting for a team that returned almost all of its starters from a year ago. Still, as the Sun Devils prepare for their fourth game of their season and first Pac-12 game, their lack of discipline is a major focus.

“We have enough people who have been here,” said Edwards. “That happened once before, when we started 2-0 and then lost a game and found our way. This is soccer. How do you react to that? That is the whole key. “

While avoiding penalties and non-enforced errors is of the utmost importance, the Sun Devils must also monitor several health situations as they begin the Pac-12 game.

Travez Moore, senior defensive end, will be out against the Cougars for the remainder of the season with a knee injury, Edwards said on Monday. He played a lot in this position as the team’s primary backup, but now the Sun Devils have to turn to others.

The Sun Devils’ most experienced player, Senior Corner Chase Lucas, was also beaten up in Provo. He pulled an opposing player’s knee to his helmet in the first half and missed the rest of the game. Shannon Forman, Senior Defensive Linemen, has also been seen hobbling while walking. Edwards said they were both at the ASU facility for team meetings but did not provide any information on their status for Saturday against Colorado.

“In all likelihood (they will play) that’s the hopeful thought,” said Edwards. “They are way better than they were and it looks like we’re on our way [towards them playing]. “

Edwards seemed adamant that his team’s penalty and execution issues were behind this, something he took steps to remedy the situation after Saturday’s defeat. It is clear that there is no time left for undisciplined play.

“Anything can happen when we get into conference play,” said Edwards. “We have nine games left and they’re all Pac-12 games. That will, in a way, dictate what kind of team we’re pushing forward. “