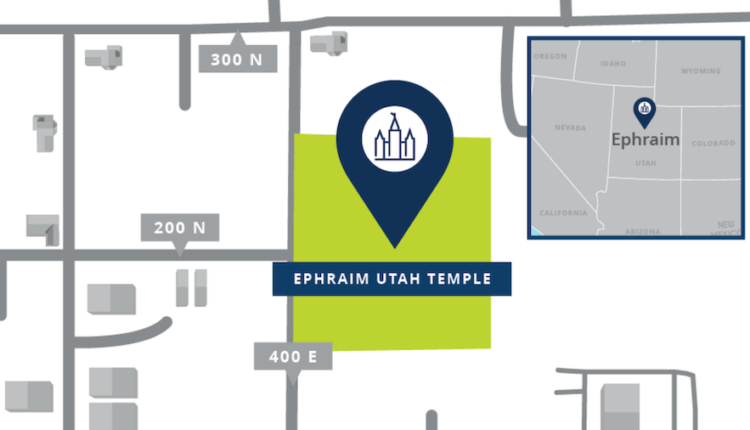 EPHRAIM, Utah – Officials for The Church of Jesus Christ of Latter-day Saints have revealed the location of the Ephraim-Utah temple.

The temple, which will serve more than 31,000 Latter-day Saints in the area, will be constructed on 9.16 acres at the intersection of 200 North and 400 East in Ephraim.

Church President Russell M. Nelson announced plans to build a temple in Ephraim on a special broadcast in the Manti area in May.

Elder Kevin R. Duncan said the building would be comparable in size to the temple in Brigham City, Utah, with four 30-seat endowment rooms, three sealing rooms, and a baptismal font.

According to church representatives, detailed design plans for the temple are still being worked out. “More information – including interior and exterior images – will be released later. Groundbreaking dates have not yet been set. Project leaders will soon begin working with city officials in these locations on preliminary plans for the temples, and leaders will begin filing public documents in the coming months. “

The nearby Manti Utah Temple, completed in May 1888, was closed for renovations on October 1st.

While both buildings are being built, Church members can visit a temple of their choice within the temple precinct.

Manti Temple volunteers have had the opportunity to help at the Payson or Cedar City temples, depending on the needs of each and their willingness to travel.

Church officials expect that open days and dedications will be held for both temples once they are completed.

‘Down to My Last Diaper’: The Anxiety of Parenting in Poverty