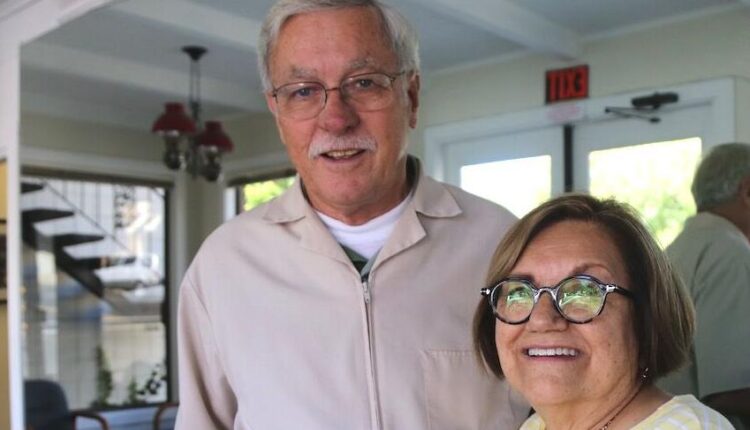 An eye doctor from high, rugged river canyon country and his wife who works with him are celebrating five decades in business in downtown Sonora this year.

dr Wallace T Stuart and Susan Stuart have been married 43 years this week.

Wallace Stuart, whose ranching ancestors go back more than a century in Tuolumne County, first opened his business at 33 N. Washington St. in May 1972, when he was 24 years old. The Stuarts married in 1979 and moved their business to its current location, 48 S. Stewart St., in October 1988.

Wallace Stuart, born in Groveland in 1946, comes from a family of south county ranchers and his dad also worked for Hetch Hetchy Water & Power as a powerhouse superintendent. His grandparents used to own 640 acres outside Groveland, the Clements Stuart Ranch, where they raised cattle and turkeys. They eventually sold it to retire and it got re-sold to developers of today’s Pine Mountain Lake.

In the early 1950s and 1960s he lived in the steep, rock-walled chasm at Early Intake below Hetch Hetchy and Poopenaut valleys on the Tuolumne River, which roared every spring when O’Shaughnessy Dam keepers released spring snowmelt. He used to go to the old Elmore School west of Buck Meadows.

When he started going to Sonora High School, he used to carpool with other Early Intake families up the switchbacks to Highway 120 to catch the school bus. It could take three hours one way to get to school, and three more hours to get back home after school.

After a year of that kind of commuting, his family moved to Moccasin, where his dad was superintendent for the old Moccasin Powerhouse below Priest Grade so he and his younger brother wouldn’t have so far to get to Sonora.

“We liked it at Early Intake,” Wallace Stuart said Thursday. “But it was a long way to Sonora. Highway 120 used to be a lot more of a winding, narrow road, and the bus would go all the way out 108 to the Winkin’ Lantern.”

Wallace Stuart fished the Tuolumne River, Cherry Reservoir, and Eleanor Reservoir above Hetch Hetchy on his free time. He also heard the fishing was good at Priest Reservoir on the keeper’s day off.

He didn’t play sports at Sonora High. Instead, he sang in the school choir and he was first tenor in an all-male octet, the Eighth Notes. The Eighth Notes would travel all over the county, to sing songs like “Hang Down Your Head Tom Dooley,” and “Little Drummer Boy” during Christmas seasons.

“I did good in school,” he said. “I don’t know why. It seemed like I could retain things.”

He graduated with the Wildcats Class of 1964, went to San Jose State two years and earned 60 units. He lived in the dorms one year, and someone gave out pamphlets on different careers, and one of the pamphlets was about optometry.

Sixty credits were all he needed to transfer to the Los Angeles School of Optometry, so he took the credits and headed south. He didn’t really like San Jose. It was a teeming metropolis compared to Moccasin, Big Oak Flat, and the river canyon country he came from.

“All the people, all the cars,” he said. “Los Angeles was really far-fetched compared to what I was used to. I was downtown next to USC. I was kind of lost, in a way, in the big city.”

Times change and younger people see things different, Wallace Stuart said. He and his wife’s two children, Ken Stuart, now 40, and Katie Stuart, now 36, both went to University of Southern California, they love LA, that’s where they still live and work, and “they can’t get enough.” Ken is a producer for an entertainment company and he lives on West 1st Street, and Katie is an attorney based in Venice Beach.

When Wallace Stuart came back to Sonora and Tuolumne County, he continued to go to the high country and fish, but he soon had an office to run, so he was back on a routine of rising early and getting home after dark. He’d get up early enough to be at places like Beardsley Reservoir at 5 am, fish a couple hours, and get downtown to open his office. Then at the end of the work day he’d go back out to fish a couple more hours.

“One year we rented a place in Cold Springs,” he said. “But that was just that one year.”

Beardsley in the 1970s was unusual for the size of trout he could catch there, Wallace Stuart said. It was a producing reservoir, meaning some of the trout were big fish, trophy size, 12 pounds and larger. Upstream was Hell’s Half Acre, between Beardsley and Donnell Reservoir, and there was a population of German brown trout up there.

“Sometimes the runoff, the storms, the snowmelt would wash them down,” he said. “And there was a lot of food in Beardsley for those fish.”

In a back room of his offices on Stewart Street, he has some trophy-sized trout mounted on plaques on the walls. One is a 30-inch, 15-pound trout and another is a 30-inch, 12-pound trout, and he caught both at Beardsley, in 1976 and 1986, respectively. Another big fish is 29 inches, 17 pounds. He caught that one in 1978 at Flaming Gorge Reservoir on the Green River in Utah.

“Those fish like that you don’t just catch them in a day or a week,” Wallace Stuart said. “We’d go in the springtime and early summer. We’d get up early in the morning and also go evenings after work.”

Dams couldn’t slow the water down during springtime. He still remembers the rumbling sounds of the mighty mainstem Tuolumne going at jet engine levels around the clock from April through July most years, when he and his family lived in the deep canyon at Early Intake.

“The water came down right by the houses,” he said. “You’re a goner if you fall in. It just roared right through there. Consistent.”

He and his wife are thankful for their customers and their business over the past 50 years, and they’re satisfied and humbled they’ve been able to stay here in Tuolumne County.

“The older you get, the more satisfying it is to do some good for people,” he said. “Looking back at it I’m grateful I’ve been able to care for my family and raise them here where I grew up.”

“We love the people,” Susan Stuart said Thursday at her offices on Stewart Street. “The people who come in here are the best people in the county. Some of our customers, we have multiple generations of the same family. The great-grandparents, the grandparents, the parents, and their children.”

The Lifeblood of Colorado (Part 3) – The Crested Butte News