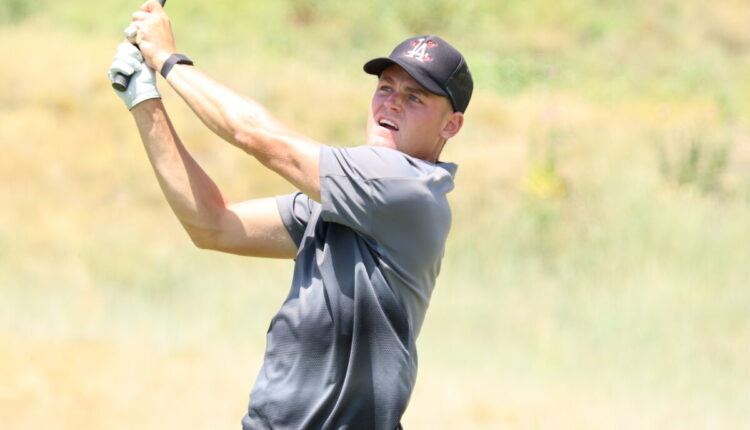 BYU golfer Max Brenchley watches his shot during the first round of match play at the 2022 Utah State Amateur golf tournament at Soldier Hollow golf course in Heber on Wednesday, July 13, 2022.

BYU junior golfer Max Brenchley said he didn’t really want to face Lone Peak junior Cooper Jones in the first round of match play at the 2022 Utah State Amateur — but no one gets to pick their opponents.

Brenchley and Jones battled through a classic match on the Gold course at Soldier Hollow in Heber on Wednesday, one that saw both golfers come up big when the pressure was on.

At the beginning, however, it looked like Brenchley was going to be able to cruise to victory.

“I played well on the front nine,” Brenchley said. “We both bogeyed our first hole but then I made a couple of birdies. On No. 9, I had a great opportunity to grab another one from him but I hit it over the green and kind of made a mess of the hole so he won one back. But overall I hit a lot of good shots and made some good putts. I just played solid.”

Brenchley had a three-hole edge going into the ninth hole, lost that one, then responded by winning No. 10 to regain that three-hole lead.

But Jones wasn’t ready to throw in the towel and proved it over the next few holes.

“Cooper is a great player,” Brenchley said. “I was expecting him to make a couple of birdies and get it going. It felt a little slow for him on the front nine but he definitely picked it back up on the back nine.”

Jones got closer by winning holes on No. 11 and no. 13, but Brenchley won No. 15 to push Jones to the brink of elimination as the Cougar junior had a two-hole lead with just three holes left.

They tied on No. 16 but then Jones took his game to another level to stay alive.

“My mentality was to hang in there,” Brenchley said. “He got some good holes to close it out and made some good putts. He had to birdie the last two to take it into extra holes. It was super fun, back and forth. It was super-solid golf on both sides.”

It can be a tough challenge for a golfer in Brenchley’s position to see a lead evaporated late and have to refocus going into the sudden-death extra-hole playoff. This time it was Brenchley who was up for the challenge.

“On the first hole, we both hit drives just barely on the edge of the rough, hit them both to 15 or 20 feet, then burned the edges with our putts,” Brenchley said. “On the next hole, the par-5, I hit my drive a little bit right into the weeds while he hit his into the left rough off the tee. He then hooked his second shot a little bit into the weeds left of the green, while I hit a great shot to the back fringe. I was able to two-putt for birdie and got the win.”

He said a key was hitting the right club on that second shot.

“I was about 185 out, downwind, downhill, adrenaline going, so I hit a 50-degree wedge and it went to the back edge,” Brenchley said. “All the factors played in and I was glad I made the right club choice, then hit a good shot.”

While it wasn’t easy to get the 20-hole win over Jones, Brenchley got the job done and now moves on to face Weber State’s Hayden Banz.

“I think maybe I’ve played more rounds with Hayden than I have with my dad,” Brenchley said with a grin. “We’ve had plenty of great matches together and great head-to-head battles. Tomorrow will probably be another one. He is a great player and it will take my best to win.”

“I’ve been sticking to my process and doing what I need to do,” Brenchley said. “On the first two days in stroke play, it wasn’t my best to barely make it but I think my game is trending in the right direction. I’m making a lot of good putts and hitting better iron shots. I feel that was something that was lacking the first two days but that was much better today. I think it’s trending on the good side.”

All of the winners from Wednesday’s matches will now prepare for three grueling days of playing two rounds, starting with the round of 32 on Thursday morning. Those winners will compete in the round of 16 on Thursday afternoon.

All of the matches at the 2022 Utah State Amateur will take place on the Gold course at Soldier Hollow in Heber.

For complete details and more information, go to http://uga.org.

BYU golfer David Timmons watches his shot during the first round of match play at the 2022 Utah State Amateur golf tournament at Soldier Hollow golf course in Heber on Wednesday, July 13, 2022.