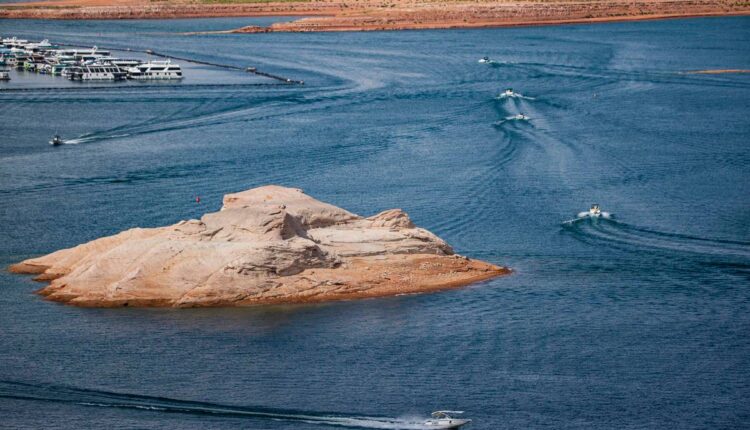 PAGE, Arizona – The signs of drought appear almost immediately on the way to Wahweap Bay on Lake Powell.

Rocks that were once underwater now appear on the surface of the lake. A white band on the canyon walls behind Glen Canyon Dam marks where the lake level was once reached.

People familiar with Lake Powell are no strangers to water level fluctuations. But that year, the drop in lake levels brought the country’s second largest reservoir to an all-time low, creating multiple challenges for those who farm the Colorado River and depend on Lake Powell for a living.

“That is really dramatic,” said Heiji Klotzbach about the decline this year. “You know, because before, when you look over here, it’s all water.”

The 70-year-old Prescott, Arizona resident looked out over the expanse of exposed rock from the last remaining boat ramp on Wahweap, a steep incline he had to climb down to reach his family for a day on the water.

It is up here that is a sign of the recent threat of a two-decade drought on the reservoir that stretches between northern Arizona and southern Utah.

“Don’t put houseboats in the water,” it says on an electronic display board.

Economy ‘falling off the edge’

It is this news that forced Bill West to keep his inventory of houseboats off the water. The boats are now dry in a yard behind his company’s office in Page, a small town that serves as a hub for Lake Powell tourism.

Since the last day he founded in mid-July, West’s Laketime company, which specializes in co-owned houseboats, has missed an estimated $ 300,000 a week during its peak season, he said.

At its full elevation of approximately 3,700 feet, Lake Powell has 11 launch ramps. The lake now has only one fully functional ramp in Bullfrog Bay, about five hours from Page.

In Wahweap Bay, the busiest visitor area, only one public ramp remains open, but large houseboats are not allowed to use it.

There’s still water here, but it’s getting harder and harder to access.

The water level is expected to drop to a level that would render the main launch pad at Wahweap Bay completely unusable in about two weeks.

And maintaining access to Wahweap Bay is vital to Page.

“The hotels, the restaurants, the grocery stores, the gas stations, it all depends on visitors going to the lake,” West said.

The National Park Service, which manages Glen Canyon National Recreation Area, said they are working on a permanent solution, but access to Wahweap Bay will soon be even more restricted for boaters.

Even if a solution came quickly, Laketime would still suffer a blow as many who canceled their trips in August cannot reschedule, said co-owner Belinda Hunter.

“Our economy is shaking as we speak,” he said.

William Shott, Superintendent of Glen Canyon National Recreation Area, knows the prospect of losing the main ramp at Wahweap Bay is causing consternation in the community.

All of the concrete on the ramp is now out of the water, so makeshift cane mats expand the launch area.

The lake level is dropping just a few feet away and the ramp can’t be extended because the area slopes down into a ravine, Shott said.

He said that when it became clear this year that water level forecasts were deteriorating, the valet service set a goal: to maintain minimal access to Lake Powell. That means having a usable ramp uplake in the Bullfrog Bay and Hall’s Crossing area and a downlake in the Wahweap area.

Park officials found an area in Wahweap Bay that could support a ramp, Shott said, so they began further investigations and found records for a ramp that was likely built in the mid-1960s.

Shott suspects that it was the first ramp built to reach the ascending Lake Powell.

Now there are plans to build this ramp and Shott hopes it can be opened by Labor Day. As recently as Tuesday, the valet thought that most boaters would not be able to get into Wahweap Bay from a launch pad for weeks.

Page Mayor Bill Diak has expressed frustration that plans to deal with falling water levels have only recently been developed.

“How long have we been talking about a drought for Lake Powell and Lake Mead?” Diak said Wednesday. “20 years? And nobody saw that coming?”

Shott said the valet service understands the importance of the lake as an economic asset to the community and its staff are doing everything they can to maintain access.

Diak said a meeting between companies, park officials and representatives of elected leaders on Wednesday led to the development of some “band-aid solutions” to get his community through a period of limited access to the lake.

On Friday, the valet announced that one asphalt auxiliary ramp would be restricted while the other was being built. The asphalt ramp has been under water for years, so use is restricted to boats under 36 feet.

Less than a year ago, projections by the US Bureau of Reclamation indicated that Lake Powell would be in the middle of a normal year, Shott said. But gradually the water level projections showed a bleak picture.

“If you told me on January 1st of this year that we were having this conversation today, I would be really shocked,” said Shott.

For Lake Powell, this means 2.5 million acres less water than expected in the first six months of the year. The reservoir is about a third full, and lake levels are expected to continue to drop until the runoff season begins next spring.

The sinking water level caused federal officials to announce in mid-July that the government would take the unprecedented step of releasing additional water from upstream reservoirs to shore up Lake Powell.

The aim is to maintain a buffer from the minimum altitude that will allow electricity to be generated at Glen Canyon Dam, a major power source for the west.

The loss of power generation at the dam means that the flexibility is lost to meet demand on the grid, according to Bob Martin, field manager of the Glen Canyon field for the Bureau of Reclamation.

At full height, the dam can produce 165 megawatts of electricity, but it’s only 111 megawatts, Martin said. Less electricity generated on the dam means less revenue for maintenance and repairs, he said. It also means less money to support environmental programs.

“It sure is a big ripple effect,” he said.

Even with the additional water discharged into Lake Powell this year, federal projections show the reservoir’s water level hit a low of 3,516 feet in April. These values ​​will increase when the runoff starts in spring.

Lake Powell in the Upper Basin is expected to reduce its releases to the Lower Basin by 750,000 acre-feet. One acre of water is roughly what two homes in the Las Vegas Valley use over 16 months.

And in the Lower Basin, users are also expected to reduce their river water allocations as part of a deficiency declaration. Nevada will reduce its 300,000 acre-foot allocation by 21,000 under two river agreements.

Overall, the Lower Basin will reduce its river water allocation by 613,000 acre-feet, according to the Bureau of Reclamation.

While adverse drought conditions have weighed on the Colorado River, Martin said the focus needs to shift to how much water is being used.

The original agreement that set the Colorado River’s allocations overestimated how much water the river could provide, he said.

Overallocation downstream is evident, he said, as Glen Canyon Dam continues to release the required amount of water, but Lake Mead water levels continue to drop.

But it shouldn’t fall on any state or group to change course, Martin said.

“We all have to pull together to fix this,” he said.