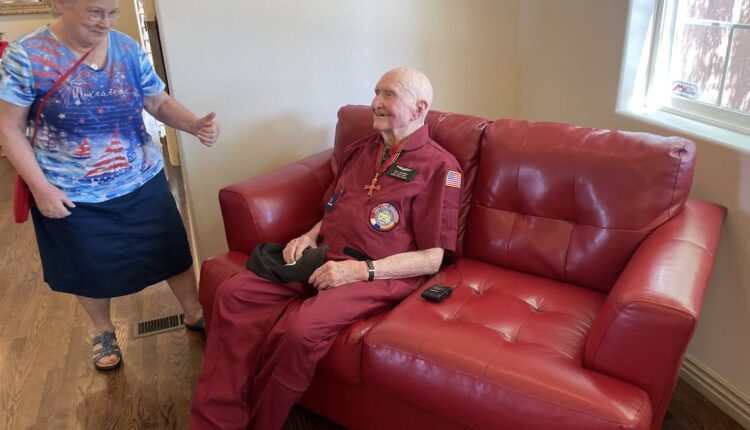 The center, which is actually located in Orem, would be renamed Col. Gail S. Halvorsen ‘Candy Bomber’ Veterans Center. Senator Mike Lee, R-Utah, and Rep. John Curtis, R-Utah, introduced the bill to Congress this week. All four other members of the Utah congressional delegation signed as co-sponsors, according to Lee’s office.

“Col. Gail Halvorsen is an example of the best service spirit in Utah,” Lee said in a prepared statement. “His creativity and compassion helped heal the wounds of World War II and soften the relationship between occupied Germany and the United States. Renaming the Provo Vet Center in his honor is a fitting and well-deserved recognition of this American hero.”

Halvorsen, who was born in Salt Lake City in 1920, was a pilot for the United States during World War II. It served as part of an air support campaign in which Allied pilots dropped food, fuel and other supplies over West Berlin after the Soviet Union blocked that part of the city in 1948.

While waiting for his plane to be unloaded, he once met a group of hungry German children standing by a fence. He gave them everything he had in his pockets: two pieces of chewing gum. He promised the children that he would come back the next day and drop candy bars from the sky.

Halvorsen has kept the promise several times. He and his co-pilots dropped 23 tons of chocolate and other sweets over West Berlin in the course of the blockade. He was nicknamed “Uncle Wiggly Wings” because he wiggled the wings of his plane after dropping the candy. He later became known as the Berlin Candy Bomber.

“What began as a gesture of compassion quickly turned into an official US Air Force operation when he and his fellow pilots dropped candy from their planes on the children of West Berlin.” Senator Mitt Romney, R-Utah, said in a statement. “Gail is an American heroine who embodies the best of humankind and embodies the kindness and service of our state, and it is only fitting that we rename the Provo Vet Center in his honor.”

Halvorsen retired from the military in 1974 but continued to be an active humanitarian worker.

Most recently, during the city’s July 4th celebrations, he took a flight over St. George and boarded a helicopter to toss a handful of candy at the crowd.

“Gail Halvorsen represents all that is good about Utahns – and our men and women in uniform,” said Curtis, adding that he is proud to give his legacy a renamed “Gail S. Halvorsen ‘Candy Bomber’ Veterans Center.” to honor.