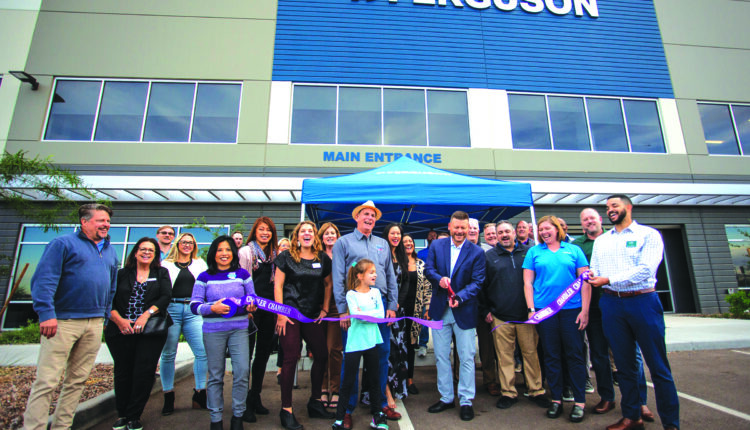 The facility is one of the ways the company with 37,000 suppliers hopes to improve supply-chain slowdowns that have plagued companies since the pandemic began.

The Chandler location is the second such distribution center the company has opened open as part of this new strategy, following the original in the Denver area. Eventually, the company hopes to have more than 30 of these centers.

The Chandler center adds 75 new jobs to the area and employs approximately 200 associates. The 365,000-square-foot facility distributes residential plumbing, lighting and appliances, commercial and industrial products to all of Arizona, New Mexico and West Texas.

“We’re looking at between 32 and 35 distribution centers,” said James Ogden, the Southwest director of branch operations for the company. “There’s a general rule, every NFL city should have a MDC.”

Chandler was the choice for the Phoenix market.

“As we went through this process to find land in the valley of Phoenix, we will call it, there were many site toured, many things worked out, and I can tell you we’re very happy and thrilled that we ended up in Chandler ,” said Marty Young, the company’s Southwest District Manager. “It’s worked out wonderfully for us.”

A market distribution center includes both a retail store for consumers and a giant warehouse for contractors. The goal is to have whatever part anyone is looking for available for quick delivery.

Even at 385,000 square feet, the warehouse turned out to be not big enough. That’s one of the problems with being one of the first ones built, company officials said. The next one to open will be in the Houston area.

“We finally figured out on Houston how to do it correctly, because although this one runs great, it was undersized before we ever moved in,” Ogden said. “So we outgrew it before it was ever built.”

Both Young and Ogden said they plan to expand their new center. Ogden said they own 10 acres of land behind the current warehouse and hope to build another 240,000 square feet as quickly as it can be approved and built.

To improve efficiency, Ferguson is relying on robots to hunt down whatever customers need. The company dedicates a three-story area of ​​the warehouse to a team of robots that scuttle about a honeycomb like structure.

Whenever a box is opened for a part, the unsold products are put into a crate. The computer knows and tracks the exact location of that crate. When another customer wants the same part, the robot goes over to where it’s located and gets it.

What if the crate they need is at the very bottom of that three-story structure?

“This is a test they did,” Ogden said. “And something on the very bottom is needed for a customer that’s standing at the counter, it takes about 12 and a half minutes to do.”

Ogden said that probably won’t happen often, because the slowest-moving products will naturally end up at the bottom over time.

In addition to the automation technology, the facilities were built with efficiency at the forefront. Ferguson uses a special machine to make custom boxes based on the dimensions of each product to minimize packaging waste.

There are 120 people employed in the warehouse area and another 100 or so in the front offices. Before moving to the MDC model, Ferguson relied on regional centers. The one that served the Phoenix area before this was located in Perris, California, and relied on a 1.3-million square foot facility.

Ogden said the biggest factor causing supply chain issues in their industry wasn’t necessarily the short shutdowns caused by COVID-19. It was the shortage of semiconductor chips.

“The microchip thing killed us,” he said. “Appliances, absolutely killed us. A lot of a lot of different things that you’re doing pumps with electronic controls, a lot of that stuff. It really was the microchips and that part is still bad. We’re still struggling through that.”

You don’t have to be a contractor or company to shop in the Ferguson retail store. It’s set up just like a home supply business. You will pay retail prices, but if you’re looking for a specific, hard-to-find part, it may be your best bet.

You may just have to wait 12 and a half minutes to get it.

But Allison Finerfrock, Ferguson general manager of southwest district, noted: “Supplementing our workforce with the new technology allows distribution centers like ours to process more orders in a shorter amount of time. We are excited to better serve the contractor community with the products they need, when they need them.”

Mike Conley could reportedly miss 2 weeks with knee strain. How will the Jazz cope?