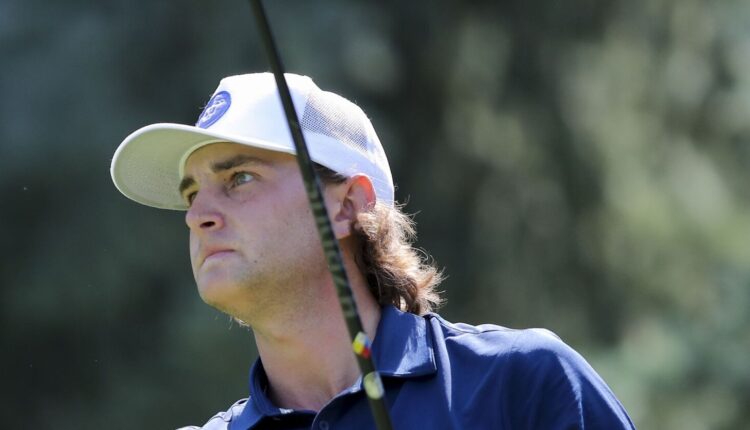 FARMINGTON — If nothing else, Peter Kuest is rewarding the people who decided to give him a sponsor exemption into the Korn Ferry Tour’s 2022 Utah Championship golf tournament.

The former BYU golfer, who won 10 college tournaments for the Cougars from 2016-20, is tied for fifth place (14-under) through 54 holes of the scheduled 72-hole event at rain-soaked Oakridge Country Club.

Kuest, 24, what no. 170 on the KFT points list when he entered the tournament but moved up the leaderboard Saturday and is only two shots out of the lead entering Sunday’s final round.

A win could be career-changing, but Kuest refuses to get ahead of himself.

“It was fun. I have always loved coming to Utah and always enjoyed playing in Utah. That’s an added bonus, and it was cooler this week, so that’s been nice.” — Utah Championship 54-hole leader Mark Anderson.

“My mindset tomorrow is just (hit) fairways and greens and see how many birdies I can make,” said the Fresno, California native. “I just want to keep it simple, nothing crazy.”

Kuest was actually tied for the lead at one point Saturday despite a double-bogey on No. 10 in which his approach shot found water, but he made a bogey on No. 16 to drop back a bit.

He was on the No. 18 tee box when the horn sounded for a weather delay that lasted a little more than two hours.

He said he had “no idea” that he was tied for the lead, saying he’s not a big scoreboard watcher.

Meanwhile, another former BYU star — Ogden’s Patrick Fishburn — shot a 4-under 67 Saturday and is tied for 13th at 13-under, three shots behind 54-hole leader Mark Anderson, a former University of South Carolina golfer who has had two stints (2012 and 2014) on the PGA Tour.

While Kuest doesn’t plan to play more aggressively than he usually does on Sunday, his teammate in 2017 and 2018 at BYU certainly does.

“I am going to try to shoot a 64 or a 63 and see what happens,” Fishburn said. “Yeah, I think I have it in me. I have done it out here before, and done it in some other places.

“Conditions will be (more favorable than Saturday). Whoever gets hot will have a chance to do that.”

The 36-year-old Anderson shot a 64 Saturday, finishing just before the weather delay came at 3:04 pm, and is alone in first at 16-under.

“It was fun. I have always loved coming to Utah and always enjoyed playing in Utah,” said Anderson, a two-time winner on this tour. “That’s an added bonus, and it was cooler this week, so that’s been nice.”

Anderson said his overall game is much better now than when he was on the PGA Tour, and he plans to stay aggressive Sunday.

The winner “is definitely going to need a low round,” Anderson said. “Just don’t get complacent and still try to shoot a low number” is the strategy.

Seven golfers with BYU ties entered the tournament on Thursday, and five were able to make the cut — a remarkable showing for the local guys.

Summerhays had to return to the course, his home course, early Saturday morning because he wasn’t able to finish his second round Friday due to multiple weather delays.

Summerhays missed an 8-footer for birdie on 17 but stuck his approach on 18 to within 4 feet and sank the birdie putt to get in on the number.

The former PGA Tour regular shot a 67 in the third round and is tied for 41st at 9-under.

Only 14 golfers were still on the course when weather delay came, including Zac Blair, Summerhays and Kuest. Play resumed at 5:10 pm

Fishburn provided one of the day’s biggest highlights, chipping in from just off the 18th green for a birdie.

The ball hung on the lip of the hole for a split second, then fell, much to the delight of the large crowd gathered around the 18th green.

“That was awesome. It kinda felt like one I was going to make, really, because it was a pretty good lie,” he said. “And the way it happened was kind of funny, how it just hung on the lip and dropped in there.”

Fishburn said he had to be patient Saturday because of the wind and some tricky pin placements. Sunday, his mindset will change.

Former BYU golfer Austen Christiansen, who left Provo after a couple years to play closer to home at Sam Houston State, shot a 68 Saturday and is tied for 30th place.

Christiansen said he still considers himself a cougar and left on good terms. He practices at BYU’s facility in Utah County whenever he’s back in town.

“I love it here,” he said. “I come here most summers. My parents have a house in Park City. … I grew up a cougar. My dad played football for one year at BYU.”

Australian Harrison Endycott is in a group at 15-under after shooting an 8-under 28 on the front nine (back nine for Oakridge members) before the winds picked up. That’s the lowest nine-hole score ever fired at Oakridge during the tournament.

“Just kinda landed it a little short. It skipped up and went in,” he said. “I was watching golf last night on TV, and I was like, ‘Oh, I am kinda due for a hole-out,’ so it was nice to do that.”

Endycott’s putter went cold on the back nine, and he made nine straight pars to card a 63.

“It got a little breezy and windy out there today, so it was obviously going to be tough to keep the momentum going forward,” he said. “But hey, I will take a 28 on the front.”

The fourth round begins at 8:30 am Sunday, with golfers going out in twosomes. The leaders will tee off at approximately 3 pm