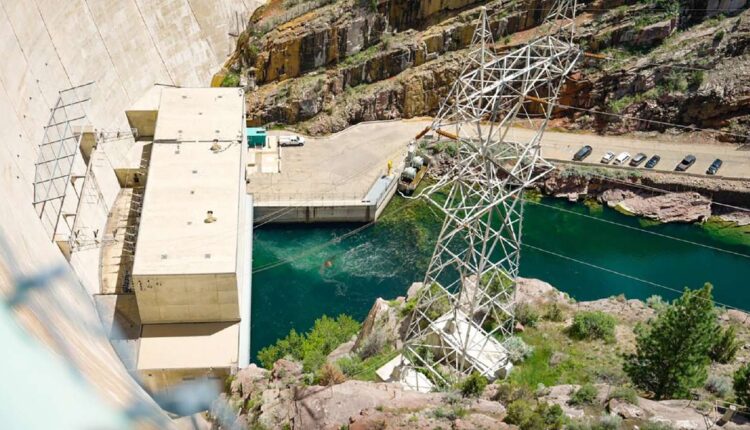 The Green River is one of the best locations in the country for fly fishing because of the temperature-controlled water released by the Flaming Gorge Dam. On the Colorado River system, the massive, unchecked demand for water downstream is a threat to everything upstream. (Evelio Contreras, CNN)

FLAMING GORGE RESERVOIR — Among those who love to chase trout with flies made of feathers, just the mention of a certain seven-mile stretch of Utah’s Green River can turn a hardened man rhapsodic.

“It’s phenomenal,” said Stephen Lytle, the son of the local game warden who’s been floating and fishing this stretch since boyhood. “You get people from all over the world. Eric Clapton has been up here. Tiger Woods. If you’re a fly fisherman, this is one of the places to hit.”

But bring up the American West’s worst drought in 1,200 years and their reverie turns to head-shaking anxiety and disgust. They may have more water than most — hundreds of miles from fallowing farms in Arizona or browning lawns in Los Angeles — but they know that on the Colorado River system, the massive, unchecked demand for water downstream is a threat to everything upstream.

“It takes millions of gallons of water for a golf course,” Tharrett said. “It’s going to reach a point when people have to decide, ‘Do I survive or do I play golf? Should I have a lawn in the desert or pay $100 for a basket of berries?'”

“The gorge is aflame,” journaled John Wesley Powell after the first time he saw the golden hour light up the red rocks in what would come to be known as Flaming Gorge.

It was 1871 and after launching his boat, the Emma Dean, in the Green River in Wyoming, the one-armed Civil War veteran was on his way to becoming the first known man to float and paddle this major tributary into the Colorado and through the Grand Canyon.

We’re going to have to learn to live with the water we have, and the use we’ve sustained for the last several decades is going to change.

His trip followed passage of the Homestead Act, which promised that any citizen willing to settle and improve America’s Wild West could claim 160 acres of federal land for free.

But after studying the geology and hydrology of the Colorado basin, Powell warned that this policy was “piling up a heritage of conflict and litigation over water rights, for there is not sufficient water to supply these lands.”

Congress and the newly-formed state governments ignored the warning, and by the middle of the 20th century they were convinced that by damming various spots along the Colorado system they could engineer enough oases to keep farms, ranches and megacities alive.

“In this section of the United States, the key is water,” John F. Kennedy said during the 1963 dedication ceremony of Flaming Gorge Dam. “No longer will the Colorado basin be the home of an erratic flow of water, causing drought and poverty in dry years and waste in wet years. Now water will be available wherever needed…”

Less than three months later, the president met tragedy in Dallas, and in the years after his dedication the dam was having devastating effects on fish downstream.

But in the late 1970s, after a graduate student convinced the fly-fishing governor of Utah to consider a dam retrofit called a penstock, engineers were able to release from specific depths of Flaming Gorge Reservoir, controlling the temperature of the tailwater below and creating a Goldilocks zone for hatching insects and the rainbow and brown trout that feast upon them.

Today, most of the local economy depends on tourists who come to splash in the reservoir, which extends deep into Wyoming, or to fish and float the Green. And when the federal Bureau of Reclamation and four Upper Colorado River Basin states agreed to release 500,000 acre-feet — 1/6 of the reservoir’s capacity — to help desiccated communities to the south, it created a local uproar.

“There’s a lot of people who just get angry,” Lytle said, while paddling the gin-clear eddies. “It’s their water. It’s their geographic possession. So, they don’t like it going down to desert cities that also need it. And any effect on the fishery, especially up here? I mean, that’s people’s livelihoods.”

“We’re concerned,” said Woody Bair, co-owner of the Flaming Gorge Resort, while leaning on shelves brimming with hand-tied flies. “As Lake Powell has gone down over all the years, we worry, ‘Is Flaming Gorge going to get to the point where it doesn’t generate electricity or goes way, way down?'”

Lake Powell, which straddles the Utah-Arizona border, is named for the man who first sounded the drought alarm over 150 years ago. And climate change is accelerating his grim prediction.

The reservoir has dropped frighteningly close to “dead pool,” when “we draw a vortex similar to what you’d see in a bathtub as the water drains,” said Nicholas Williams, the Bureau of Reclamation’s power manager for the Upper Colorado River Basin . “If you don’t have a deep enough pool of water above, then that causes issues and can damage the power plant equipment and is too low to generate electricity.”

Reclamation officials told a Senate committee this week that Western states should brace for even more dramatic cuts in Colorado River water allocation in 2023 — up to four million acre-feet or over 1.3 trillion gallons, almost as much as California is allocated in a year.

“How long can we do this?” Williams said of the Flaming Gorge releases. “It’s limited to a few years. The rest of it is going to depend on how long do we persist in the drought, and where does our water use go? We’re going to have to learn to live with the water we have, and the use we’ve sustained for the last several decades is going to change.”

Tharrett believes officials have a misguided notion that they are going to be able to salvage something by draining the upper basin reservoirs.

“It’s like a teenager when they get their first paycheck,” Tharrett told CNN, “and that next day they go and they spend it all and they don’t get paid for two weeks and then they go into a panic. If they drain all these upper reservoirs, which are the lifeblood to everything down below, they’re going to have nothing.”

He added: “And then they’re really going to panic.”

Navigating the Paradigm Shifts of Higher Education and Healthcare