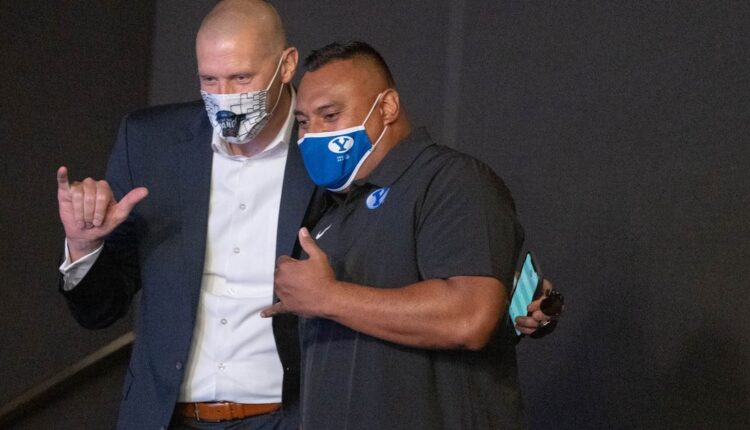 For BYU Football, switching to the Big 12 means leaving independence. But what does that mean for men’s basketball?

The Cougars have become top contenders in the West Coast Conference but will have tougher competition in the Big 12 in the league.

BYU basketball coach Mark Pope has a vision in mind.

Major conference games at the historic Allen Fieldhouse in Kansas.

Fans rush to the square at the Marriott Center after beating a high-profile opponent.

The Cougars are preparing for Gonzaga and the West Coast Conference. But BYU will soon find itself at what is currently perhaps the best basketball conference in the nation.

“It doesn’t get better,” said BYU coach Mark Pope after the Cougars announced their move to the Big 12 last week. “This is where you want to be and it’s super, super humbling. It will be an incredible challenge, but we are really looking forward to it. “

On September 10th, BYU was officially invited to the Big 12 Conference. Rather than just bringing first-placed Gonzaga to Provo, the Cougars will host annual games with multiple national champions. Of the current members, Kansas has three national titles while Oklahoma State has two championships and Baylor is the reigning national champion.

Since joining the West Coast Conference in 2011, BYU has risen to become the second best team in the league – second only to the powerhouse Gonzaga. Saint Mary’s has proven to be another top contender in the league, having played four of its 10 NCAA tournament appearances since BYU joined the WCC (2012, 2013, 2017, 2019).

Now the Cougars will be attending a conference that regularly sends multiple teams to the NCAA tournament.

Last season, seven Big 12 teams were in the top 25 for most of the season and headed for March Madness: Baylor, Kansas, Texas Tech, Oklahoma, Oklahoma State, Texas, and West Virginia.

Baylor beat Gonzaga 86-70 to claim the national title, giving the Bulldogs their only loss of the season.

BYU knows some of the current Big 12 teams. The Cougars have played the Jayhawks a couple of times, dating back to 1959, most recently falling to Kansas 71-56 in the 2019 Maui Invitational.

Although Texas will leave the Big 12 by 2025, the Cougars last played against the Longhorns in 2013, which eventually resulted in a narrow 86-82 win.

Throughout its time in the WCC, BYU has played the most against Baylor. The Cougars and Bears played a three-game series for consecutive years, 2011-2013. BYU lost all three of those games.

That said, BYU will essentially be in the Big 12 with a clean record against its new conference opponents.

However, before the Cougars can join the Big 12, they must play two more seasons in the WCC. And Pope believes the current league game will help BYU prepare for the jump to a power five conference.

Because football is independent, the entire game schedule is made up of the teams that play it. Basketball doesn’t have that much flexibility. Usually a good part of the non-conference schedule is taken up by tournaments. Add in some contests in the states, as in the case of BYU, and there’s not much left to plan. Still, the Cougars have tried to come up with the most competitive non-conference schedule.

The number of conference games on the schedule may change once BYU joins the Big 12 along with Houston, Cincinnati and UCF and / or when Texas and Oklahoma depart.

“There will be fewer games that are free for us,” said Pope.

However, at the end of the day, that’s a good problem.

Just by being in the Big 12, the Cougars will be able to attract bigger and better talent to fill out their non-conference schedule. Rather than having to keep an eye on the teams and predict which games might be Quadrant 1 or Quadrant 2 matches, the chance of getting games that improve BYU’s NCAA résumé just by participating in a power- Five conference.

After the Cougars finish the last two seasons in the top 25 and return to the NCAA tournament, the Cougars will try to keep the momentum going as they prepare to move to the Big 12.

“Just think of the parade of teams that will roll through this Marriott Center,” said Pope. “It is one of the most epic arenas in the country and we have of course seen it in its prime against the country’s No. 1 in Gonzaga over the past few years. But now it’s only going to be a game-for-game deal and I’m happy for Cougar Nation and BYU fans to find their way into this Marriott Center because it will be really special. “

Climate change is happening right now in Colorado, here’s how