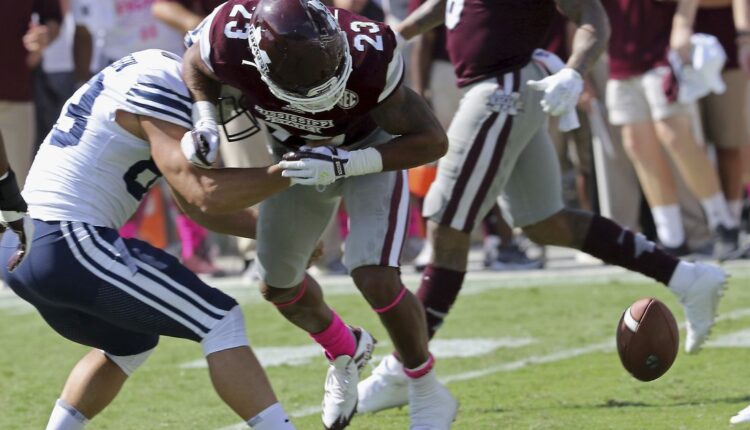 Former BYU punter Andrew Mikkelsen delivers an MMA knockout, in a tradition that is becoming common among cougars

Andrew Mikkelsen took a bow just 38 seconds after getting into the octagon last weekend.

The former BYU punter knocked out his opponent Dominico McIntosh in the first round of his amateur mixed martial arts bout. With nearly the entire BYU football team in attendance, Mikkelsen wrapped up his third MMA win and proceeded to celebrate with the crowd at the Maverik Center.

The scene has since gone viral, with former NFL punter Pat McAfee weighing in.

Mikkelsen has been training with former BYU tight end Kyle Griffitts near Provo for the fight. Griffitts made his MMA debut this weekend on the same card, organized by Fierce Fighting Championships. Mikkelsen is on his fourth fight, going 3-1.

“I know he’s a kicker,” Griffitts said. “But man that guy is huge, gets after it. Fighting is the best workout of your life.”

Griffitts and Mikkelsen are part of a growing contingent of former BYU players who have taken to MMA in recent years. BYU defensive coordinator Ilaisa Tuiaki fought in six MMA bouts when he was younger. Jan Jorgensen, a former player who joined the Cougars’ staff last week as a defensive analyst, also has a background in mixed martial arts.

Since, Tuiaki has funneled players into the sport. Now, BYU players go to a gym in Provo called Agema to train. The practices usually last around three hours and focus on the core principles of jiu-jitsu.

Mikkelsen played at BYU in 2014, then from 2016-18. He forced a fumble as a kicker against Mississippi State and mostly was a kickoff specialist.

Griffitts is currently a graduate assistant for BYU, after walking on from 2016-20.

Marolt: You can’t turn this around by twisting words | opinion