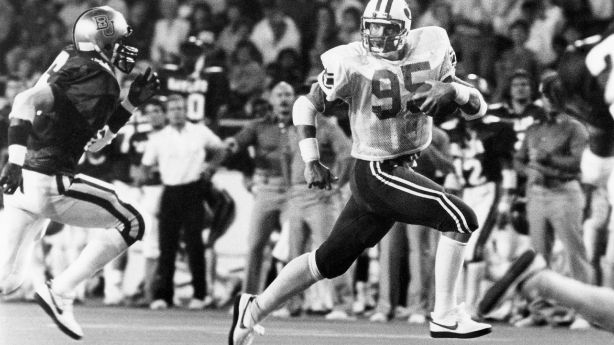 PROVO – A former BYU tight-end and college football hall of famer died of natural causes at his California home this week.

Gordon Linn Hudson, 59, died peacefully on Monday, September 27, in San Jose, California, where he lived, according to an obituary by Legacy released on Wednesday.

As a two-time unanimous All-American in 1982 and 1983, Hudson holds NCAA records for most passes from a tight end per game (5.4), most career yards per game from a tight end (75.3 ) and most of the yards in a game were caught by a close finish when he had 259 against Utah.

“Gordon was a phenomenal player who opened up the Cougar passing game in ways that had not been seen before from his tight end position,” BYU sports director Tom Holmoe said in a statement. “I will always remember our great teammate in the College Football Hall of Fame and what he did for BYU.”

As a senior, Hudson worked with Hall of Fame quarterback Steve Young to set a national record of 44 catches and six touchdowns ahead of an injury-reduced season, according to his obituary.

He made a professional career with the LA Express in the USFL and one season with the Seattle Seahawks of the NFL.

Born on June 22, 1962 in Everett, Washington, Hudson eventually enrolled at Brighton High School, where he played twice each in football, basketball and baseball.

The 6-foot-4,231-pound tight end chose BYU over offers from Oregon State, Montana, Idaho, Washington and Washington State, where it completed a three-year career with 178 receptions for 2,484 yards and 22 touchdowns before leaving the professional ranks. Hudson became arguably the largest tight end in BYU history, putting up the numbers only duplicated by Dennis Pitta and Matt Bushman since the two-time All-Western Athletic Conference star roamed the Provo campus.

After his retirement, Hudson was from 1995 to 1997 coach in the Arena Football League for the San Jose Sabercats and in 1998 head coach of the Utah Cats of the PIFL.

Hudson was inducted into the College Football Hall of Fame in 2009 and was the first no-quarterback to represent BYU in the Hall of Fame, which also featured legendary coach LaVell Edwards, Ty Detmer, Jim McMahon, Marc Wilson, Gifford Nielsen and Young are housed, among others.

Hudson married his wife, the former Mindy Carr, in 1982. He leaves behind his children Ryan, Mackenzie, Kylie, Chandler and three grandchildren.

He also leaves behind his parents, sisters Jana, Kay and Ariana, as well as several nieces and nephews.

A memorial will be held for the former BYU tight end in 2022. The family is soliciting donations to help the family with final preparations for his funeral through PayPal at [email protected]

Family, friends, and fans are also encouraged to send their favorite Hudson souvenirs to the same address.