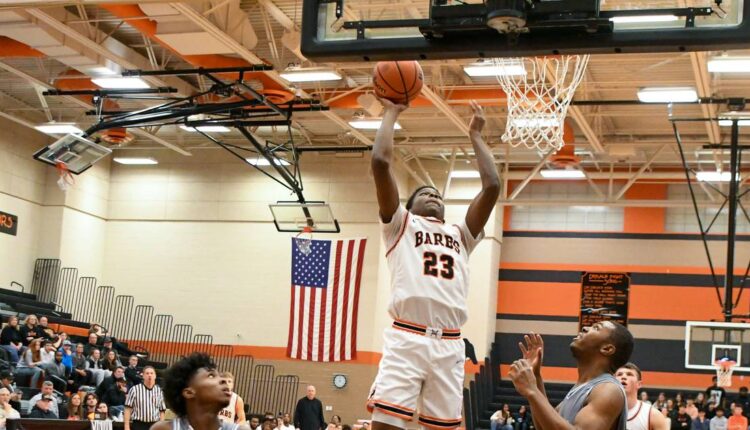 Grant scored eight of his 15 points in the first quarter, and the game went from a three-point margin in the second quarter to an 18-point lead at the half in a 65-41 win over Ogden in the first round of the 95th annual Chuck Dayton Holiday Classic on Tuesday.

“I don’t want to foul out,” Grant said. “I just want to play smart defense and foul when I need to, not all the time.”

Grant said it’s just a matter of adjusting to the pace of the game, and he said he feels pretty confident nearly a dozen games into his freshman campaign.

Grant has found himself in foul trouble a lot this year for the Barbs (9-2), but that wasn’t the case against the Owls (7-10). Although he didn’t play a full game, that was because Reynolds pulled his starters late in the third quarter after a 12-0 run pushed the DeKalb lead to 54-23.

Grant had only two fouls, grabbed five rebounds and was 7 of 10 from the floor.

“I think the last three or four games it’s been better for him,” Reynolds said. “He’s played with a little more energy defensively, which in turn leads to being in a better position and better fundamentally. He’s done really well. He’s advanced for a young guy, and he just continues to get better.”

The Owls led early, but a quick 8-0 run in the first gave the Barbs a 16-10 lead and they never trailed again. It was 18-15 early in the second, but they used a 36-8 run to build that big lead near the end of the third quarter.

Reynolds said the choppy play gave way early, and Darrell Island was a big part of that. He ended up with 11 points.

Sean Reynolds led the Barbs with 20. Even though he missed three of his first four 3-point attempts, he finished the game 5 for 10 from long range. He also had three assists and no turnovers.

“I thought he had some good passes to start the game, but he was a little off offensively shooting the ball,” Mike Reynolds said. “Once we settled down and started to play a little more disciplined brand of basketball, I thought our shooting percentage went through the roof, so it was good.”

Deshawn Perry-Tucker led the Owls with 12 points, Alante’ Reynolds added 11, and Andre Boton had a game-high seven rebounds. Johnny Henderson scored 10 for the Barbs, as no DeKalb player played 20 minutes in the win.