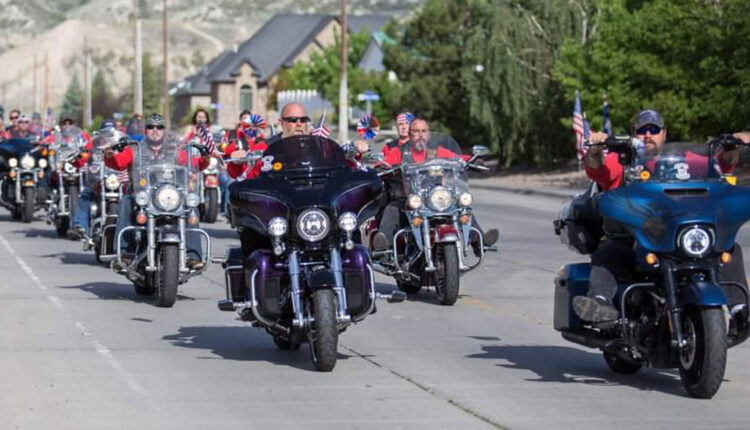 It began as a simple concept sketched out on a napkin seven years ago.

Sid Dusel and Troy Fellbaum were brainstorming ways to help the veteran community in Sweetwater County while keeping their efforts somewhat discreet.

Unfortunately, Troy passed away in 2015 and Sid put the idea on the back burner for about a year. But when several members of the American Legion riders’ club approached him about getting his idea off the ground, Sid knew it was time to put rubber to the road.

And that’s how the Unknown Saints Riders’ Club got off the ground.

“That fall I put pen to paper and started to figure out what I wanted and how I wanted people to perceive us,” Sid said. “That following January we started really focusing on what we wanted our patch to be like, what our purpose was going to be and what our mission was all about.”

Twenty one members “stood the club up” in February 2016 at which time they voted in their by-laws and created a mission statement:

“Through all our efforts, we choose to dedicate our time, money and friendship. We give support to our veterans ; past, present and future, pay our respects to the fallen heroes and families of both fallen and not, help the wounded so they may lead a fulfilling life, ride in honor of those who cannot, continue with a commitment to our children and youth also our community . We do this with laying no claim of territory. We are the Unknown Saints RC.”

The Unknown Saints then began to slowly creep into the public with a philanthropic vision that began mainly with members of American Legion Archie Hay Post #24.

Three years into their existence and on the strength of their community involvement locally, The Unknown Saints decided to branch out and form a charter in the Bridger Valley.

The Bridger Valley branch is celebrating its five-year anniversary this year and The Unknown Saints continue to uphold the values ​​which define their commitment to those communities.

We stuck true to what we’re about. It’s about the veterans in our community, the children of veterans, and the community itself.

Contributions have included financial assistance, helping veterans find affordable housing, and even giving a veteran a ride from Laramie to Rock Springs so he could catch a bus to visit family in Sheridan. Sid says about 30% of the club membership is still very active in assisting veterans through the American Legion.

Eventually The Unknown Saints generosity expanded to The Boys’ and Girls’ Club of Sweetwater County, Western Wyoming Community College, and other local organizations.

Joe Tallon Jr. and Christy Austin approached Sid about a year ago with the idea that the Unknown Saints partner with Rocky Mountain Power in assisting the company with its community efforts. Sid said this was a great opportunity to give community members who don’t qualify for American Legion membership a chance to get involved.

“(RPM representative) Ron (Wild) said ‘okay…let’s make you famous.’ But I’m not looking to be famous,” Sid continued. “We want to be associated with the riding clubs that get noticed by the work they do, not by the individual or people doing the work.”

Wild said he could make that happen, and a successful partnership was born.

The Unknown Saints contributions continued to spread throughout the community including:

Sid says the club’s efforts caught the eye of Rock Springs Chamber of Commerce Director Rick Lee who gave them even more projects to assist on and helped with public relations for the group.

“(Rick) took notice that we are not your typical volunteers,” Sid continued. “Most of us wear black leather and black jeans. We have long hair and tattoos and ride motorcycles. He gave us the opportunity to step out of that persona.”

Lee invited the Unknown Saints to enter the Chamber’s inaugural Fourth of July Parade this year which they gladly accepted. The club plans to participate in the annual Parade of Lights on December 3, and they’ve also decorated a tree along Dewar Drive for the holidays.

Unknown in Name Only

The Unknown Saints pride themselves in going about their business in the most inconspicuous manner possible. But when you give back to your community the way they have, it’s bound to get noticed.

The club received the Community Involvement Award at the annual Rock Springs Chamber of Commerce Rock Star Awards Banquet earlier this month. Sid called the award “a bit of an eye-opener” because when the charter first began he didn’t want the club to be recognized for anything other than “the little things we did.”

But Joe said Wild warned them that once they got started down this path, it would open a Pandora’s box that would lead to the group being not so “unknown.”

We’re trying to get out more and more into the community to show people this is what we do, and this is how we do it.

The Unknown Saints have expanded to 27 members in Rock Springs, 22 in Mountain View, and nine under a new charter that was opened in Green River in September. They’re talking to people all around Wyoming and beyond to try to grow their philanthropic reach.

“Our goal is to get as much of the State of Wyoming as we can so that people outside the State of Wyoming start taking notice,” said Sid. “We have a couple of sayings in the Unknown Saints that go ‘we’re going to turn a tire for those who can’t, and we don’t know them all but we owe them all.”

During this season of outreach, it’s fitting to watch an idea hatched more than seven years ago bloomed into the generous goodwill which embodies the spirit of The Unknown Saints.