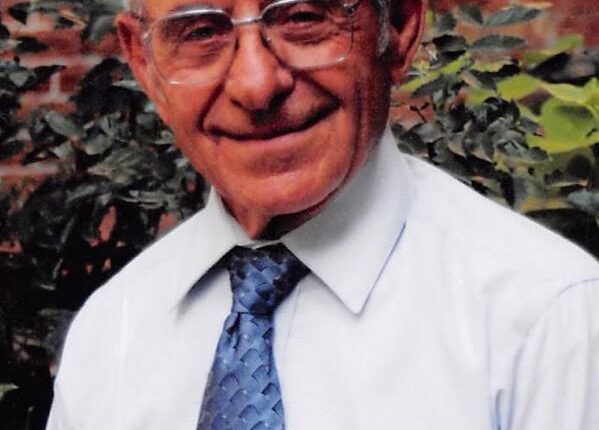 James George Kogianes, age 96, affectionately known as “Kogi” was born at home to Cretan immigrant parents George Kogianes and Elpeneke Leventis. He was the second of ten children (nine boys and one girl), all living in a small home on the east side of Provo, Utah. At a very young age Jim learned the value of hard work on the family fruit farm and through his education in Utah County schools.

He served in the US Air Force from February 1944 until his Honorable Discharge on February 21, 1947. He served as an MP (military policeman) in the Philippines where he escorted General Eisenhower which was the highlight of his military career. His foundation in the military would serve him well throughout his life. Upon returning from his duties, he was employed by the Denver and Rio Grande Railroad and also by Geneva Steel Company.

Seeking information on fruit trees for his family’s orchard in 1954, he had a lucky chance encounter at the Weber County Extension Office when he met Mary Papageorge. It was love at first site and following a short courtship, they were married on September 5, 1954 in the Holy Trinity Greek Orthodox Church in Salt Lake City. They shared 63 years of marriage until Mary’s passing in 2017.

Jim and Mary made their home in Farr West, Utah. Jim attended Plumbing Trade School where he obtained his Journeyman’s license and for 31 years he practiced his trade, 27 years with Bachman’s Plumbing and Heating Company where he was on call 24 hours a day. He was a master of his trade and dedicated member of the Plumbers and Pipe Fitters Union. You could learn something from Jim every day. He valued a good pair of gloves, a bright flashlight, a sharp pocketknife, and his signature blue coveralls.

In 1987, Jim and Mary became the owners and operators of Bagels & Buns in Ogden where three generations of the family served loyal customers and friends for 20 years. His contagious smile and infectious personality were an asset to both the bagel shop and the Ogden community.

The Holy Transfiguration Greek Orthodox Church in Ogden of which he was a member, was established in large part due to his unwavering faith and commitment. He was a lifelong member of AHEPA, served as Scout Master and was a pillar of the Greek Food Festival. His faith was evident by his actions.

His hobbies included watering the garden and harvesting garlic with Mary, mowing the lawn until age 94 on a Kubota riding lawnmower, repairing small engines, hauling cattle with his son “Jope,” hunting big game on an annual gathering of the Greeks at Squaw Peak , and later in life birdwatching and jigsaw puzzles.

James was a devoted husband, father, grandfather, great-grandfather, godfather, brother and uncle. He is survived by his daughter Ann (Drew) Wilson and son George (Jann) Kogianes; Papou to Stacey (Quin) Henderson, Dean (Nichole) Wilson, and Hailey (Jeffrey) Harber and a kind step-Papou to Tyler Jensen and Hollie (Wes) Ashton. Jim loved being Propapou to Calista, Mark, Pyper, Peyton, Audrey, and Monelle and step-Propapou to Ella, Wyatt and Braylynn. He is also survived by all of his beloved and gritty brothers John, Steve, Sam, Mike, Tony, Gus, Manus and George.

He was preceded in death by his parents; dear wife Mary; his sister Mary and his godson Chris Bolos.

Funeral services will be held on Saturday, December 3rd at 11 am at the Holy Transfiguration Greek Orthodox Church, 674 42nd Street in South Ogden with Rev. Fr. Mario Giannopoulos officiating. Family will meet with friends on Friday, December 2nd from 6 to 8 pm with Trisagion service at 7 pm at Lindquist’s Ogden Mortuary, 3408 Washington Blvd.

In lieu of flowers, memorial donations may be made to the Holy Transfiguration Greek Orthodox Church of Ogden.

Will temporary ban on homeless shelters be lifted? Advocates call for city’s guidance