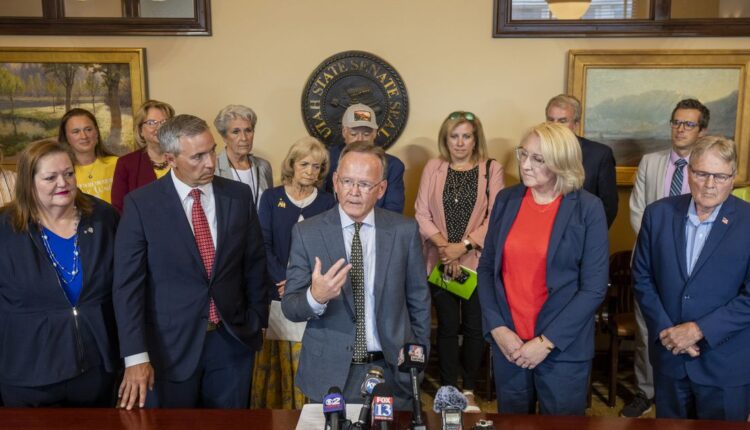 Republican lawmakers and Utah politicos celebrated the Supreme Court’s decision to overturn Roe v. Wade on Friday, with one legislator saying she trusted Utah women “to control [their] intake of semen.”

Rep. Karianne Lisonbee described a text message she said she received urging her to hold men accountable for unwanted pregnancies.

“I got a text message today saying I should seek to control men’s ejaculations and not women’s pregnancies … I do trust women enough to control when they allow a man to ejaculate inside of them and to control that intake of semen,” the Clearfield Republican told reporters at a news conference at the Utah Capitol on Friday.

Lisonbee also said she wanted to reassure Utahns that lawmakers want them to have justice after sexual assaults.

Rep. Angela Romero, who has championed legislation to support survivors of sexual assault in the Beehive State, said she doesn’t think her colleague meant to be “harmful” with her Friday remarks, but a survivor may read it and think their elected officials don’t believe them when they say they have been raped or sexually assaulted.

“We have to be sensitive to how we phrase things because what we say impacts not just the people we represent, it impacts the entire state of Utah,” Romero, D-Salt Lake City, said.

There are people who are put in compromising situations where they couldn’t give consent, the representative said. So, it’s important to not paint abortion and people who access abortion with a broad brush, she said, and to make sure they get the resources and help they need.

A 2016 study conducted by Utah State University found that one in six Utah women have reported having been raped, higher than the national average.

“We believe consent and bodily autonomy are fundamental rights and vital to support and empower survivors of sexual assault,” Martinez-Ortiz said. “We will continue to advocate and educate for laws that do not cause continuous harm to survivors.”

Lisonbee was one of several Republican lawmakers who expressed their support for the conservative court’s Friday ruling.

“I believe as an American we need to protect the life of not only the unborn, we need to be respectful of all life, and hopefully that’s what the Supreme Court has done today,” said Utah Senate President Stuart Adams, R-Layton.

Adams and other lawmakers were flanked by a phalanx of faces familiar in the Utah pro-life community. The brigade of activists and politicians included Eagle Forum President Gayle Ruzicka and 3rd Congressional District candidate Chris Herrod.

They praised the Supreme Court ruling, saying it was never proper to take this decision away from individual states.

“Fifty years ago, the Supreme Court created the ability for abortions to be conducted in the state of Utah, despite the fact it was against the law. Today, the Supreme Court restored that power to the state,” Sen. Dan McCay, R-Riverton told reporters.

In 2020, McCay shepherded a so-called “trigger law” through the Legislature. It outlawed most abortions in the state, with a few exceptions, but it would only take effect if the Supreme Court were to ever reverse the decision on Roe v. Calf. At the time, McCay’s bill was seen as merely a political stunt, and even he thought there was a very slim chance it would ever come to fruition.

“When this passed, many asked if this was just a message bill,” McCay said. “We didn’t foresee this. We wanted to restore where Utah was on the abortion issue as it was being questioned throughout the United States.”

The Utah law, SB174, went into effect Friday evening after the Legislature’s general counsel found the ruling met the trigger law’s legal requirements for the state to prohibit abortion.

Friday’s decision is a seismic shift in public policy and raises more than a few questions about how the law will be implemented now that a medical procedure that was widely available in the state for half a century became illegal in a day’s time.

Lisonbee said she does not foresee lawmakers taking additional steps to prevent women from traveling to other states where abortion is still legal, as Utah’s law punishes abortion providers, not pregnant women.

“I don’t think there’s any contemplation that we would try to control a woman’s ability to travel or to obtain an abortion elsewhere,” Lisonbee said. “Certainly, if someone wants to do that, it’s a free country and we wouldn’t be the type of authoritarian government that would prevent that.”

With the option of ending a pregnancy mostly off the table in Utah, Lisonbee also said the state should be doing more to strengthen the social safety net in the state.

“I think we’ve done a lot in Utah to go down that road,” she said. “I think we do have to put some responsibility on people to make wise choices for themselves.”

Several Democrats in the Legislature were already making noise that they planned to introduce legislation in the 2023 session to loosen some of the restrictions that are now in effect. The Senate president, however, quickly threw water on that idea.

“We have a bill that the Legislature supported and we put in place. It will be the law,” Adams said. “My feeling is we ought to give this bill a chance to be law and actually find the pros and cons and how it works before we start cleaning it.”

As one might imagine with a politically charged subject like reproductive rights, there’s been some backlash directed at Republican members of the Legislature — including direct threats.

McCay, who shared a voicemail he received with The Salt Lake Tribune, has reported a caller that threatened his safety to law enforcement.

“Just to let you know if abortions aren’t safe, neither are you,” the caller says in the message.

On Friday, Justice Clarence Thomas argued the Supreme Court should revisit other rulings on hot-button social issues, including legalizing same-sex marriage. Utah’s constitutional ban on same-sex unions still exists and could be reinstated if the Supreme Court were to overturn its earlier decision. Adams said he thinks that would be proper based on today’s ruling.

“I strongly believe that states ought to have the right to pass legislation and that the states ought to be where these issues are determined,” Adams said, adding that he doesn’t see Utah pressing the Supreme Court to reconsider.

But would he support Utah joining with other states in hopes that the court would take another look at same-sex marriage?