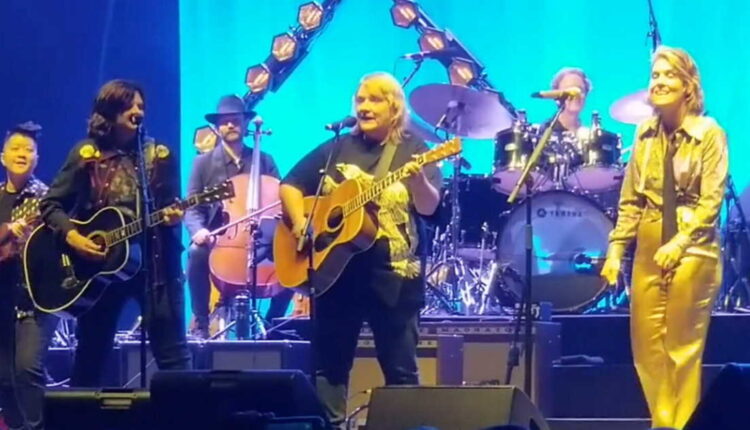 The collaborations on “Least Complicated” and “Go” came as part of the singer-songwriter’s encore at Vivint Arena.

Brandi Carlile welcomed Indigo Girls to share the stage during her show on Thursday in Salt Lake City. The duo consisting of Amy Ray other Emily Saliers emerged for two songs as part of the encore last night at Vivint Arena.

Both Indigo Girls and Celisse supported Carlile on the latest stop of the singer-songwriter’s Beyond These Silent Dreams Tour. Brandi has a long history of collaborating live with Ray and Saliers, including slots opening for the iconic duo in 2008 and 2009 and swapping guest spots at The Greek Theater in Berkeley, California this past June.

Brandi Carlile brought out Amy Ray, Emily Salier and Indigo Girls touring member violinist Lyris Hung to lead her band through “Least Complicated” and “Go” in the middle of the seven-song encore in Salt Lake City. Indigo Girls originally released the former on 1994’s Swamp Ophelia and the latter on 1999’s Come On Now Social.

Watch a brief fan-captured clip of “Least Complicated” below:

Last night’s encore began with Celisse performing her song “Freedom” with Brandi Carlile and her band. Brandi then went sans guests for a cover of Joni Mitchell’s “Woodstock” before inviting Indigo Girls to the stage. Celisse also appeared during Carlile’s main set for the tour staple medley combining elements of “Space Oddity” by David Bowie and Radiohead’s “Creep.”

Brandi Carlile will play the Wildlands Festival at Gallatin Gateway, Montana on Saturday. The headlining tour then picks up with Indigo Girls and Allison Russell opening at Merriweather Post Pavillion in Columbia, Maryland next Thursday, August 18.

DRIED UP: Lakes Mead and Powell at epicenter of biggest Western drought in history