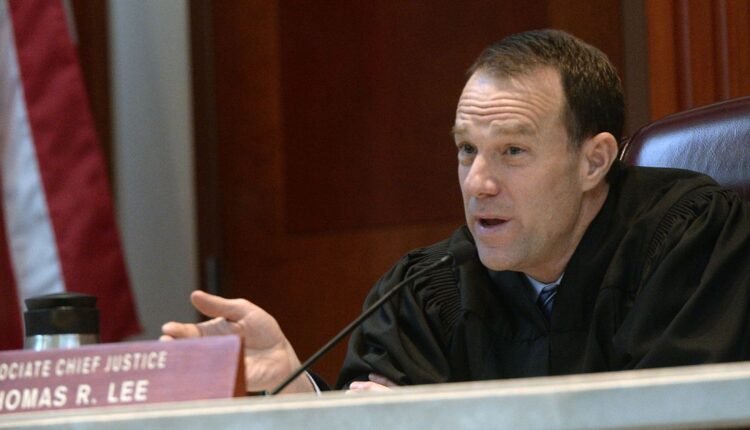 Here’s who Gov. Cox could pick to be the next Utah Supreme Court justice

Justice Thomas Lee is stepping down after a decade on the Utah Supreme Court.

(Al Hartmann | The Salt Lake Tribune) Utah Supreme Court Associate Chief Justice Thomas Lee questions federal public defender Charlotte Merrill, at the Utah Supreme Court Wednesday, Jan. 10, 2018. Lee is retiring after 12 years on the bench and, as of May 20, 2022, there are seven nominees to replace him.

There are seven nominees to replace Utah Supreme Court Justice Thomas Lee, who is retiring from the bench at the end of July. After a public comment period, Gov. Spencer Cox will make an appointment to the five-judge panel.

Lee is stepping down after being appointed to the Utah Supreme Court in 2010 by former Gov. Gary Herbert. Lee’s brother, Mike, is the senior US Senator from Utah.

In 2006, when Bates was an assistant state attorney general, he represented the state in a court case where a 13-year-old Ogden girl, impregnated by her 12-year-old boyfriend, was labeled a delinquent. The girl was found guilty of violating Utah’s fornication law that prohibits sex with anyone under 14. The Utah Supreme Court threw the case out.

In 2018, Gardner rejected an election-related lawsuit from then-Rep. Mia Love’s campaign. Love sued to stop Salt Lake County from counting votes in her race against Democrat Ben McAdams, claiming there was no mechanism to challenge voter signatures on mail-in ballots. McAdams defeated Love by just 694 votes.

During the early days of the COVID-19 pandemic, Gibson blocked a concert in Tooele County meant to protest coronavirus restrictions. The state had loosened most restrictions on businesses but still banned gatherings of more than 50 people. The show eventually took place in Cedar City.

Harris ruled in 2018 that a court could cut off alimony payments if the recipient lives with someone else, Fox 13 reported. A lower court stopped a woman’s $7,000 per month alimony after she started living with a new boyfriend. Harris upheld the lower court ruling.

Before being appointed to the bench, Landau represented the mother of Darien Hunt, the 22-year-old man shot to death by Saratoga Springs Police in 2017. Susan Hunt claimed she did not agree to a financial settlement with the city over the shooting, but a federal judge ruled against her.

After his appointment, Landau implemented a program where defendants could replace fines or community service hours with donations to charitable organizations, according to ABC 4.

Lee was on former President Donald Trump’s list of potential US Supreme Court nominees in 2018 and 2020. Trump selected Brett Kavanaugh and Amy Coney Barrett instead.

In 2018, Lee and then-Lt. gov. Cox came under fire for accepting front-row tickets to the Utah Jazz from former owner Gail Miller. Lee and Cox said they did not break ethical rules by using the tickets. Cox claims he did not violate a ban on gifts to executive branch members because he considered Miller a close friend.