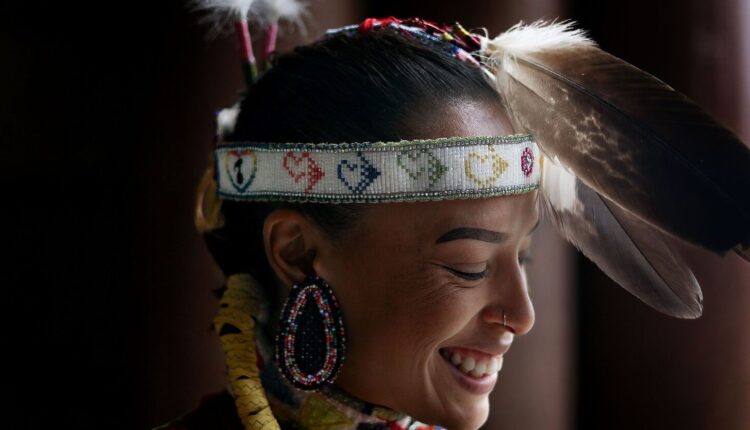 Wearing a headdress with ornate brown and white feathers, an authentic jingle dress, a turquoise belt, colorful beads from top to bottom, moccasins on her feet, teardrop earrings, and what looked to be a beaver pelt, the young woman turned on her laptop synthesizer, held the microphone sideways like a hip-hop rapper, sang a song called “I Pray for You” — all while performing a powwow dance.

Lots of places around the country are observing Native American Heritage Month—an event that has been held every November since President George HW Bush made it an official annual affair in 1990—with speeches, ceremonies and celebrations.

But it’s a safe bet no one ranks it in quite like Salt Lake City.

The occasion was a ceremony hosted by Salt Lake Mayor Erin Mendenhall on the steps of the City-County Building. After the requisite speeches and reading of an official proclamation, the time was turned over to the 34-year-old entertainer mentioned above, who goes by the stage name “Honey.”

She sang and danced three numbers, interspersing her act with tributes to Indigenous and Native American people, along with a little information about herself.

She’s part Native American and part African American. Her mother is full-blooded Dine’ — Navajo to Anglos — and her father is Black.

In a country where both groups have had their fair share of struggles, to put it mildly, she said this proudly and without rancor.

“I can’t hold a grudge about anything I didn’t have a say in,” she said.

What she does have a say in is making it her life’s work to celebrate, and to educate others, about who and where she comes from, trying to make the world a better, more inclusive and understanding place in the process.

Music has been her vehicle. She found her talent in her junior high school choir and hasn’t stopped since. Her style? “I’d say R&B with a splash of hip-hop and soul,” is how she describes it. “It’s definitely unique.”

Her bringing up was also unique. Born Rhonda Duvall, she grew up alternating her formative years between Blue Gap, Arizona, an unincorporated town in the heart of the Navajo Nation, and the west side of the Salt Lake Valley. As a teenager, she attended schools in Kearns before graduating from Cottonwood High School.

Representatives from the University of Utah American Indian Resource Center, Urban Indian Center of Salt Lake and the Utah Division of Indian Affairs celebrate the beginning of Native American Heritage Month at the Salt Lake City-County Building on Tuesday, Nov. 1, 2022.

Recognizing that almost no one at school looked like her made her all the more determined to celebrate her heritage. After graduating high school, she became “Honey,” set up a website (voiceofhoney.com), recorded three records, and began touring, performing her signature moves and sound — a blend of her American Indian and African American roots — for both Native and non-native audiences.

That led to her current full-time job at the Urban Indian Center of Salt Lake, where she is the family program youth facilitator and community and cultural specialist.

“It’s exhausting,” she says of the many hats she wears, before smiling and adding, “But it helps having ADHD slightly.”

Her special brand of advocacy can also be trying. Not everyone embraces what she extols. She’s seen her share of prejudice and bigotry.

“Yeah, we do have some struggles, things that hold us back,” she says, “but it’s the strength that comes from those struggles that allows the beauty to come forth. It’s like life, not every day is going to be peachy and sometimes you have to fight harder to help others understand who we are.”

This month, she suggests, would be a great time for everyone to explore the Native American community that is right here in our midst but often overlooked. “Just Google ‘Native American events,’” she says, “to see the opportunities that are out there for us to get to know each other better.”

She continues, “The path I’m treading is a blessed path, it’s an independent path, one that I feel not many could partake in or have the energy for. I’m so happy to be a voice, to make a difference in our community, to make sure our traditions are passed down and help pave the way for the next generation.”

That’s the story Honey told the mayor and the audience on the steps of the City-County Building at the beginning of Native American Heritage Month. That’s the story she’ll keep telling wherever and whenever she’s given the chance. It’s an American story. As American as they come.