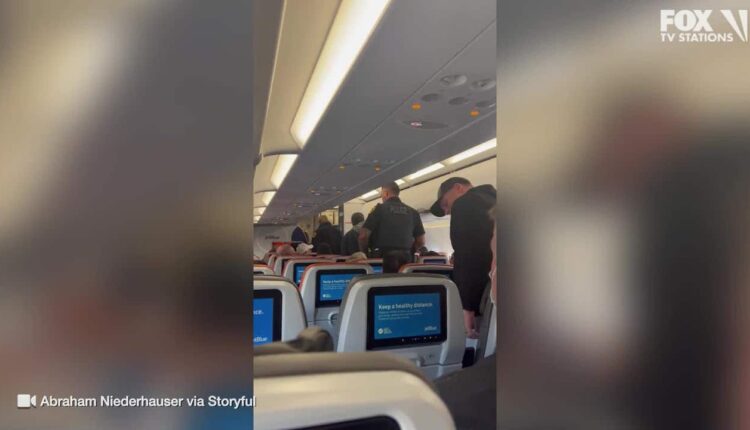 Video shows a man being escorted off a plane after reportedly holding a knife to a woman’s throat on a JetBlue flight from NYC to Salt Lake City.

A Utah man was arrested and charged after reportedly bringing a straight-edge razor on board a JetBlue plane and holding it to a woman’s throat mid-flight.

According to the US Justice Department, 41-year-old Merrill Darrell Fackrell was sitting in a window seat next to a married couple on a flight from New York City to Salt Lake City, Utah, on Nov. 21.

During the flight, Fackrell allegedly placed his hands on the woman’s screen and told her to pause her movie. The woman took off her headphones and saw Fackrell clutching what she thought was a knife inches away from her throat.

The woman’s husband went to the front of the plane to get help from a flight attendant, while the woman lunged toward the aisle to escape. Fackrell tried to stop her by grabbing her shoulder, authorities said.

Authorities didn’t say how Fackrell was detained, but the weapon was secured and later identified as a Facon wood-handled straight edge razor with a one-to-two-inch blade.

Video taken by passenger Abraham Niederhauser shows police walking through the plane after it landed. Niederhauser told Storyful he was two seats behind the suspect and noticed he had something in his hand when he stood up. Niederhauser said it happened mid-flight and police were waiting when they landed.

READ MORE: How did a man board a Tampa-bound flight with a box cutter?

Fackrell was charged with carrying a weapon on an aircraft and assaulting it with a dangerous weapon in the “special aircraft jurisdiction of the United States,” the Justice Department said.

From Vietnam to Metro and beyond, Hatch served with distinction – The Nevada Independent