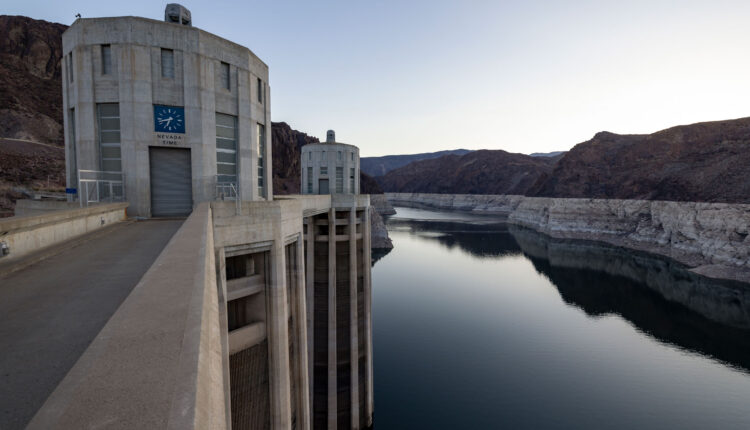 Hoover Dam Brings Electricity to 1.3 Million—It’s At Risk of Shutting Down

What experts are calling an “on-again, off-again” drought for the past two decades is depleting the Colorado River and its two main reservoirs. If the situation continues, the millions of Americans receiving water and electricity from the Hoover Dam could be effected.

The Colorado River feeds two reservoirs––Lake Mead and Lake Powell––which supply the water that powers the Hoover Dam’s capability to create electricity for 1.3 million people. The Hoover Dam also provides water to 25 million people, but if water falls another 150 feet, the reservoirs won’t be full enough to power the Hoover Dam.

How Do Water Levels Effect The Hoover Dam?

In the 1990s, reservoir levels were at 100 percent, according to Richard Seager, a climate scientist at Columbia University. Now, levels hover around 30 percent. It takes years to restore the levels in the expansive reservoirs, and Seager doubts the levels will ever return to what they were in the 1990s.

Lake Mead’s white bathtub ring reveals historic water level decline near Hoover Dam on September 16, 2022, in Boulder City, Nevada. The federal government has proposed an unprecedented plan to cut back on water supplies for Arizona, Nevada and California, where millions of people rely on its water and power, as climate change-driven drought continues to lower water levels at the biggest reservoir in the nation to historic low capacities.
David McNew/Getty

“The levels are getting low enough where if they get much lower, they will have trouble operating the dam in the normal ways,” University of California professor Jay Lund told Newsweek.

The potential fallout if that happens could be catastrophic, as the Hoover Dam uses hydroelectric energy––a cheaper, cleaner form of energy––to power 1.3 million homes in Nevada, Arizona and California. The dam also provides irrigation water and controls Colorado River flooding, according to Geoengineer.org, an informational website for geotechnical engineers.

Officials could likely come up with a solution to the electricity problem, although a very expensive one, according to Lund.

Grand Canyon Monitoring and Research Center Economist Lucas Bair said if water falls below a certain level, the reservoirs won’t be able to power the hydropower generating units that produce the hydroelectric power.

“The lower the lake level gets, the less energy you can produce from a unit of water,” Bair told Newsweek. “If the lake falls below what people are calling a power pool, they will not produce any energy.”

Bair said a power pool could happen as soon as next year. If hydroelectric power from the dam halts, energy will be replaced with more expensive and less clean sources, such as a mix of fossil fuels and renewables.

The water supply is more at risk.

“Water has fewer substitutes than hydroelectricity,” Bair said. “We can make up energy through fossil fuels, but if we fall short on water, we have to restrict supply because there are little to no replacements.”

Drought occurs throughout the United States’ west on a normal cycle, but climate change is increasing the frequency and severity in which droughts occur.

Climate change and global warming cause higher rates of evaporation, exacerbating the rate of drought. Lund told Newsweek that climate change can increase evaporation rates by as much as 25 percent.

Even with the same amount of precipitation, droughts become more likely because water evaporates more quickly and less flows into the reservoirs to feed the Hoover Dam.

If the lake falls below what people are calling a power pool, they will not produce any energy.

The drought experienced by Americans now is one of the top five driest periods in the past millennium, and Seager told Newsweek the drought wouldn’t be so severe without the influence of climate change.

Lake Mead and Lake Powell are often touted as tourist destinations, but the lakes serve a greater purpose than entertainment. Tourists are noticing the ominous bathtub ring around Lake Mead signaling where the water levels previously were.

If the supply worsens, the first restrictions put into place will likely affect lawn watering or require residents to empty their pools. Although home water use isn’t restricted at this time, some residents are trying to preserve water to prevent the situation from reaching that point.

Water levels have repercussions on local ecology, too. US Geological Survey Research Ecologist Bridget Deemer told Newsweek that if water levels continue to fall, they are at risk of heating more than normal. The heating water temperatures could collapse a prized trout fishery in the region.

“As the water warms up, it leads to higher food demand for the trout because they require more food at warmer temperatures,” she said. “River food is limited, so they are losing weight. It has an impact on the anglers there.”

The bathtub ring is a signal that the significance may get worse, even before levels fall too low to supply the Hoover Dam. Soon, Lund anticipates the water levels to affect agriculture. Agriculture consumes as much as 80 percent of the Colorado River’s supplies. If officials initiate further restrictions, it could mean falling hundreds of thousands of acres of agricultural land and eliminating the irrigation supply. 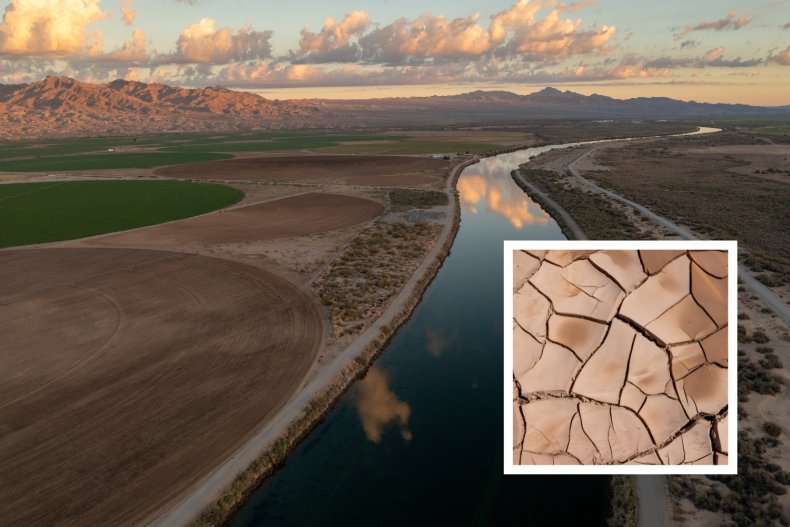 The Colorado River winds through farmland near Fort Mohave on September 23, 2022, north of Needles, California. The federal government has proposed an unprecedented plan to cut back on water supplies for Arizona, Nevada and California, where millions of people rely on its water and power, as climate change-driven drought continues to lower water levels at the biggest reservoirs in the nation , Lakes Mead and Powell, to historic low capacities. The inset shows dried mud is seen on land that was once under Lake Mead as unprecedented drought reduces Colorado River and Lake Mead to critical water levels on September 17, 2022, in Lake Mead National Recreation Area, Nevada.
David McNew/Getty

Since it takes so much water to refill the massive reservoirs, the problem must be addressed before it becomes a disaster.

“If it gets to the point of a disaster, it’s too late or you have to do something much more draconian,” he said.

Draconian actions Lund said are possible could include cutting Arizona water rights even more than they are or curtailing agricultural water supply. To preserve water, Lund said it’s possible officials will decide to revert agricultural land to a fallow state in certain areas in Arizona and California. Anywhere from 500,000 to a million acres could be fallowed, causing the land to dry up and make it impossible to grow most of the crops on the land, costing people their jobs and creating an economic loss for the area.

Lund expects the fallowed land to occur soon, despite efforts to curtail water use.

The Colorado River provides a valuable water resource, which is heavily sought after, and legal limits are imposed on states seeking the water.

In 2019, the US Bureau of Reclamation created a Drought Contingency Plan.

Despite the plan, water levels were so low in 2021 that officials declared a water shortage for the first time, prompting water supply cuts to Arizona, Nevada and Mexico beginning in October of that year. Water levels have continued to fall, and another cut is set to take place at the start of 2023.

Officials also tried to solve the water shortage by moving water from the Flaming Gorge Reservoir to Lake Powell.

However, experts agree the most influential solution would be using less water. Seager said farmers may be forced to switch their production away from livestock, which is heavy on water consumption, and residents preserving their water.

“It’s got to be an encouragement to using water far more efficiently or making sure they are getting maximum amount of economic return from water use,” Seager said.