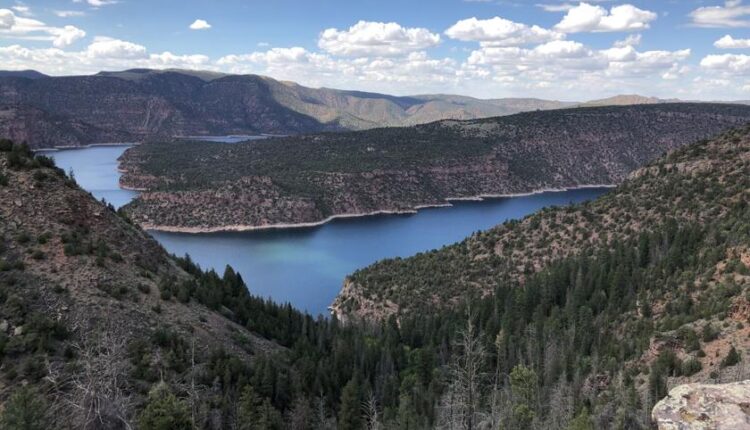 Not sure if I have ever heard of Flaming Gorge before spending several days there in late June. My husband Ron and I were on a three week camping trip and needed a destination between a family reunion in Rocky Mountain National Park and a stay at our sons-in-law’s Montana Fishing Lodge. I was looking in southwest Wyoming and there it was! This truly pristine gem is located between Wyoming and northeast Utah.

As we turned south on Highway 191 off I-80 in south Wyoming in the late afternoon, we wondered what was in store for us. We drove for over an hour on an almost deserted two-lane road, surrounded by wide open spaces, picturesque viewpoints and colorful cliffs. It felt like we left civilization until we finally reached the hamlet of Dutch John in Utah. After a short time we had our first view of the Green River and the extensive Flaming Gorge Dam. Wow – it was beautiful!

Shortly before us was the Pine Forest RV Park next to the Flaming Gorge Resort, where we would spend the next four nights. Pine Forest is without a doubt one of the best RV parks we have ever stayed at. The owners obviously take great pride in maintaining a clean, spacious and welcoming stopover for campers. Our campsite was adjacent to a horse pasture and the horses that lived there visited and entertained us every day.

On our first full day in the area, we already felt a sense of calm, especially after stepping out of the crowds of the RMNP. A short mile-long hike from the RV park led us to a viewpoint of the gorge, where the Green River flows lazily and meanders through the fluted cliffs far below.

The next day we charged the e-bikes and drove to the Sheep Creek Geology Loop, which is off the beaten track. The mostly paved road is very rarely used by vehicles, we did not meet other cyclists. Very quickly we exclaimed that this was without a doubt the best bike route ever! The landscape is beautiful and varied as you drive through a wooded canyon with fantastic rock formations rising on either side. It was a warm and sunny day, and white flakes from the local poplar trees were drifting in the wind. The road curved and bent upwards through blooming mountain meadows.

When we finally turned around, we found we had climbed 1,500 feet, so we drove downhill and stopped at a cute little roadside park for a picnic. The Sheep Creek Geology Loop is a dream for anyone interested in geology, but also for people like us who simply love wonderful landscapes. On the way back to the campsite, we stopped at the Red Canyon Visitor Center, which overlooks the Green River from the canyon rim. We checked out the many beautiful exhibits that document the history and geology of the area.

In addition to being a top fishing destination, Flaming Gorge is also known as dinosaur land. It took us a full day to travel south to the Dinosaur National Monument Quarry Visitor Center near Jensen, Utah. Another true gem, this monument covers 329 square miles of mostly Utah and Colorado wilderness. The stunning canyons of the Green River and Yampa Rivers, rock formations, petroglyphs and pictograms are a treat, but the main attraction is the remains of ancient dinosaurs.

Fortunately, our RV hosts warned us that reservations were required to visit the Quarry Exhibition Hall. It offers a rare and unique opportunity to see dinosaur fossil beds dating back to 150 million years ago. The bones of over 500 reptiles representing 10 species were buried in river sediments that they eventually cast in stone. An informative ranger described how the bone wall was excavated, preserved and exposed over a period of 40 years. Today visitors can even touch some of the bones and imagine what it was like when these prehistoric giants roamed the area.

Finding dinosaur skulls is rare because skull bones are usually thinner and more delicate than other bones in the body. Several skulls can be seen in the quarry, and an original skull of a carnivorous Allosaurus found in the area is on display alongside a replica of an imposing Allosaurus skeleton. The quarry is a must see, and the monument is well worth more than a day of exploring. Hiking trails, breathtaking views, evidence of ancient peoples, wildlife, flora and rock formations are in abundance. Another true gem!

There is so much to do in this area that we will definitely return as we barely scratched the surface. I want to take a boat down on the river for a different perspective of the layered cliffs. There are several historical sites in the area, including homesteads, buildings built by the Civilian Conservation Corps in the 1930s, old military roads, and even a hideout that was used by the outlaw Butch Cassidy and his gang. In the visitor center there, fine tours to the Flaming Gorge Dam are offered.

Pssst – don’t tell anyone about Flaming Gorge. Getting there is a bit of a challenge, and the hordes flocking into the national parks have not yet spotted it. We hope to come back next year.

Libby Kinder is a freelance writer and retired mental health clinical advisor. She and her husband have lived in southwest Colorado Springs for 16 years. Contact Libby with comments and travel ideas at [email protected]