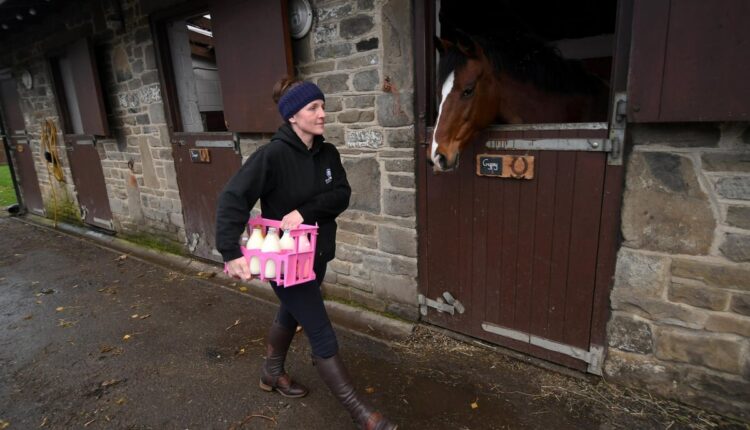 How business is booming for Calderdale milkwoman Debbie Ogden

Single mum Debbie Ogden, who juggles bringing up her two young sons with running both a full livery for 14 horses and four milk rounds from her base at Gardens Farm in Greetland, said during the health emergency lockdown there was a massive spike in demand.

She said it was a welcome return in popularity of milk deliveries as households wanting to know their daily supply of milk for breakfasts, teas, coffees was available.

“It just exploded from our initial 300 and we took on around another 250 new customers during that first lockdown which nearly doubled what we’d had before. The majority have stayed and are still with us now. That has led to that one round becoming two in order that we can get the milk delivered on each round within about a 7-hour period.

“We were doing such a good job that in the November of that first Covid year a local milkman in Savile Park, Paul Jackson, who was retiring approached me to see if I wanted to take on his round. That’s what has taken us to where we are now and we are continuing to grow.

“I took on what was a milk round of 300 customers two and a half years ago and today it has become four rounds with 900 customers and it is growing all the time. We will get to 1200 within the next few months,” she said.

“I manage all the rounds. I have other people delivering and I cover the holidays. I also have the horses to muck out particularly more so during winter when they are in most of the time, so it can be a bit hairy for this single mum with two children. When I have to go out ‘on the milk’ my mum Anne has to come and look after the boys and then I have to bring cake back for breakfast for them, to keep them happy.

“We have one milkman and three milkwomen. I have two women that do one day a week and another woman and man that both do five days a week. It’s load-up time here at 12.30pm every night with everyone back here and everything delivered by 7.30am.

“The Briggs have been dairy farming milk for 100 years and they really care about their cows and their customers. Neil Brigg and his son Sam will sometimes deliver but it is mostly Matthew who we see. They bring it in after they have milked the cows and then bottled it and it goes into my huge 42ft fridge. It’s as fresh as it can be, delivered and being used within 24 hours of the cows having been milked.

Debbie said the trend has also been to go back to glass bottles and another trend has been that younger people are now more switched on to having their milk delivered.

“The majority of the milk we deliver is glass bottles. We do deliver poly bottles to some but the majority is pints. There has been a shift from people that were taking plastic changing to glass. I think people are a bit more aware of what they are using, they think more about things like food miles, packaging and supporting local. Although nobody would have wanted what happened during Covid I think it did doorstep delivery a massive favour.

Pictured from the left are Sandra Suter, Wayne Taylor and Corbie Vince at Gardens Farm Greetland

“Our new customers are also more often than not younger customers that have young families. That’s been another big thing and once you have one or two being delivered to in a street, others start coming on board too. I see our growth coming from filling in the gaps in our areas.

“I’ve learned a lot in the last few years. It’s about condensing your areas and making ourselves really strong in them. Initially we had a few areas quite far away from our base. We gave those to other milkmen and really focused on our own areas so the radius of one of our milk rounds now is no more than five miles,” she added.

“What I’ve found is how important the milkman or milkwoman can be to a community. It’s not just about running a business, ordering stock, dealing with accounts, which I’d never done before. It’s also about the community you end up being a part of.

“The friendly neighborhood milkman or milkwoman is still the case. We laugh sometimes when we think about ourselves as the fourth emergency service but it’s right. I’ve rung a customer at 2.30 in the morning because their door has been open that shouldn’t have been when I’ve been out on the milk; and we have key codes for some of our elderly customers where we call out their names when we go in.

“I want all that to stay, including customers ringing me with their orders for things like eggs, juice, cream from Longley Farm or butter. I don’t want everything online. We will even do an old style collection for those that want it.

And Debbie’s customers love it when they see Eric and George, if they’re up in time to see them.

“Before we split the round into two the boys and I did the round every Saturday morning. The boys would be in the pickup with me and delivering milk from 5am to 9am. We always finished at the butty shop for breakfast and cake.

It has all been quite a change from Debbie’s earlier career that saw her teaching equine at Askham Bryan College and then Salford City College. She said she’s now back where she grew up and wouldn’t change it for the world.

“My dad Neil farms just up the road with my brother Mathew where they have pedigree Charolais. I tenant around 25 acres here and love it with the horses, being ‘on the milk’ and with the boys. This is how I see things being for me for the rest of my life. It’s something that I thoroughly enjoy and the milkman and milkwoman is back!

A royal exhibition: A look back in time to the Queen’s 2004 visit to Calderdale…