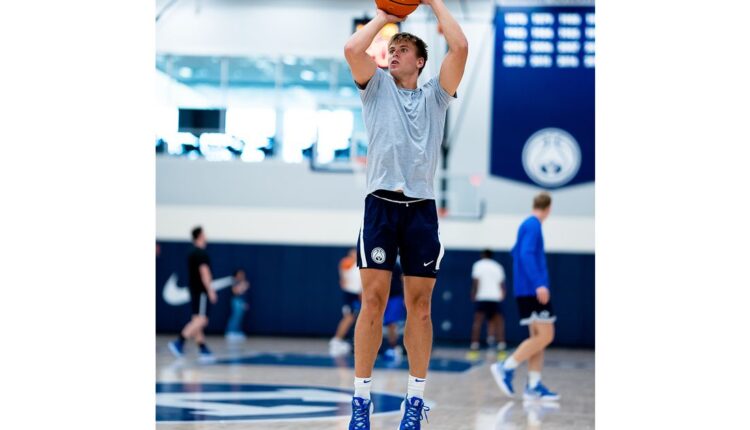 The BYU men’s basketball team brought back only six of its players from last year’s team. Alex Barcello graduated, and many others left via the transfer portal.

So the Cougars have to integrate several new faces for the 2022-23 season, the last before BYU athletics joins the Big 12. But they’ll at least have some familiarity with a few of the new guys.

Three players previously given scholarships by the Cougars returned this summer from their two-year missions with The Church of Jesus Christ of Latter-day Saints. Dallin Hall, Richie Saunders and Tanner Toolson came back armed with new experiences and plenty of lessons from their time away from home and basketball.

“Best two years of my life so far,” Hall said.

All three players were slated to serve missions all over the world. But the COVID-19 pandemic caused some of the locations to be moved.

Hall originally was called to the Philippines, but served in Fresno, Calif. Saunders was called to Africa, but went to Seattle. Toolson went to his original destination of Jacksonville, Fla.

Some think because athletes serving missions return two years older, they have some sort of advantage. Others disagree.

The three men’s basketball players, though, prove that return missionaries have it much harder than regular rookies. Not only do they have to adjust to life back in the real world, they must also return to basketball shape after two years of basically not playing at all.

Hall, Saunders and Toolson tried to say in some semblance of athletic shape while they were away. Most regimented was Saunders, who woke up at 5:30 am every morning to lift weights and practiced shooting at a nearby gym before his day of missionary work officially started.

But once Saunders got back to Provo and joined his teammates, he found himself struggling.

“I really tried hard on my mission to make it so it was a smoother transition, but still,” Saunders said. “I think my good idol was Tyler Haws. What he said as I was talking to him about it was, ‘Your mind knows what to do, but your body doesn’t.’”

Toolson said he was fortunate that throughout his mission, he participated in sports nights on Wednesdays or Saturdays. When he did hoop, he showed off a bit, but also showed some rust.

“I was usually the better player in the gym,” said Toolson, who suffered a mid-foot sprain during his mission after someone landed on him. “It was fun because everyone got super frustrated when I would win. But there was definitely times where I got very humbled and I couldn’t do things that I could do six months prior.”

Hall and Toolson are roommates with Tanner Hayhurst, another return missionary who served in New Orleans and signed with the Cougars as a preferred walk-on. Those four players, including Saunders, started to bond rather quickly as soon as they were all home from their missions due to their shared experiences.

“Some of my favorite nights have just been kind of talking with Tanner [Hayhurst] and Dallin … about just old mission stories,” Toolson said.

“I think it helps a lot just to build camaraderie because we’re all in the same boat,” Hall added. “Also, we are all able to keep each other accountable on and off the court with the things that we’ve learned from our mission. It’s really awesome.”

BYU started official practices in late September. During a BYUtv broadcast of one of the sessions, guard Trevin Knell revealed that he had surgery on his shoulder and will be out for several months.

Coach Mark Pope said after that practice that Knell’s injury will mean that Hall and Saunders in particular will likely be expected to contribute sooner than originally thought.

“It’s putting a lot of pressure on those guys but they’re ready,” Pope said.

Most Aquatic Invasive Species Check Stations to Close for Season