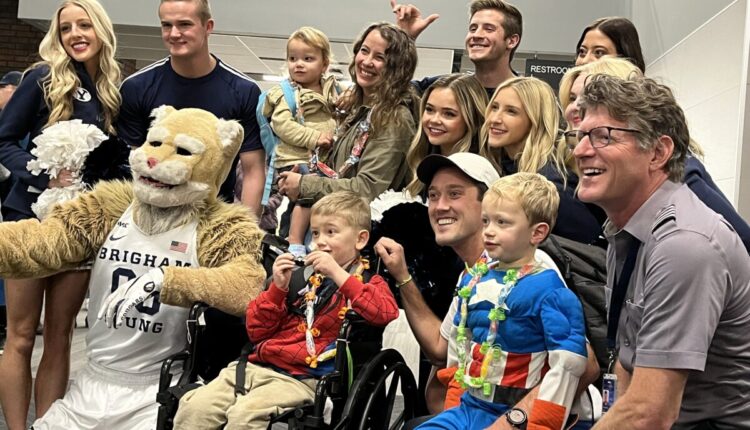 Hyrum Mace, in a red sweatshirt, is surrounded by family, BYU friends and pilots as they celebrate Hyrum Mace Day on Tuesday, Nov. 15, 2022.

If 5-year-old Hyrum Mace has luck and faith on his side he will get to celebrate his 6th birthday on Nov. 29. The odds are iffy.

Hyrum was diagnosed April 4 at his home outside Oklahoma City with Diffuse Intrinsic Pontine Glioma (DIPG), a lethal pediatric tumor that has grown around Hyrum’s brain stem. Some of his symptoms included blurred vision, poor equilibrium and pain.

Most patients have about six to eight months to live.

So far, the cancer is inoperable and incurable. The only medical trials were being done on the west coast, with the most intense research being conducted at Stanford University. The trials started in June of 2020.

Hyrum Mace, with his model plane, is surrounded by Zippy, Provo’s mascot, and his family members on Tuesday, Nov. 15, 2022.

Both Michael and Erica Oldroyd Mace have parents living in the Provo/Orem area. They also had relatives by Stanford. However, the cost of air fare alone would have been well beyond what they could afford.

Without the help of relatives, and the inexpensive flights on Breeze to San Francisco, it is likely that Hyrum wouldn’t have been a part of the trials and wouldn’t be around still today.

“They wouldn’t be able to do this,” said Bill Oldroyd, Hyrum’s grandfather. “They are super blessed to have this flight.”

Hyrum sees himself as a modern day pioneer. He believes the trials at Stanford will help other children after he is gone.

“He was aware he is dying and he said he will work with Abraham (Old Testament) and Nephi (Book of Mormon) to help the children,” said Erica Mace, Hyrum’s mother.

Hyrum Mace, parents Michael and Erica Mace and two younger siblings pose for a photo with BYU’s Cosmo at the Provo Airport on Tuesday, Nov. 15, 2022.

According to Erica, Hyrum is a natural caretaker. He is thoughtful, loves small children, is a deep thinker and naturally faithful. He is an old soul in a child’s body.

He has loved studying scripture stories and has complete understanding that his life will not be long. He has known that for some time, as he started feeling sick.

“We’re very open,” Erica said. “He knows he is going to die and is at peace with that.”

Instead of waiting for that day, Hyrum, his parents and two younger siblings are making memories. It’s not easy. So when days like Tuesday come along there are lots of pictures and excitement.

On Tuesday, Hyrum returned to his temporary home in Provo, on Breeze, from Stanford. To surprise Hyrum – a huge BYU sports fan – Breeze arranged for BYU’s mascot Cosmo the Cougar, cheerleaders, Breeze employees and family members to meet Hyrum in the Provo airport terminal. Those who couldn’t make it donated money to the Mace family.

This is part of Breeze’s Kindness Week, according to Natalie Atwood, chief people officer at Breeze. Every employee at the company, from the pilots to desk workers, knows of Hyrum and his story. Passengers on his plane knew as well.

As part of Kindness Week, Tuesday was “Hyrum Mace Day” at Breeze. He got his wings and was a pilot for a day.

When they landed, Cosmo met Hyrum on the plane. As Breeze maintains a contract with BYU sports, they were able to arrange time during the week for Hyrum to attend a few activities at the university.

When Hyrum flies to Stanford. his treatments are extremely aggressive and include 50 million of his cells being shot into his brain stem. His first treatment was 100 million cells. The radiation is aggressive and puts him in intensive care for two weeks.

He gets to come home for two weeks to play and enjoy the family before he gets back on a breeze flight to San Francisco for another treatment. Because of his illness, Hyrum does not go to school, so the time spent together as family is precious.

Provo’s Parks and Recreation mascot Zippy was also on hand to give Hyrum a year’s membership to the various venues in the city, a sign of hope for the months ahead.

Hyrum Mace, in a red sweatshirt, is surrounded by family, BYU friends and pilots as they celebrate Hyrum Mace Day on Tuesday, Nov. 15, 2022.

Hyrum Mace, with his model plane, is surrounded by Zippy, Provo’s mascot, and his family members on Tuesday, Nov. 15, 2022.

Hyrum Mace, parents Michael and Erica Mace and two younger siblings pose for a photo with BYU’s Cosmo at the Provo Airport on Tuesday, Nov. 15, 2022.

Las Vegas has strict outdoor watering restrictions (with fines!) Should Utah do the same?

Lots of options on the table for saving Great Salt Lake, but especially the simplest — use less water | News, Sports, Jobs