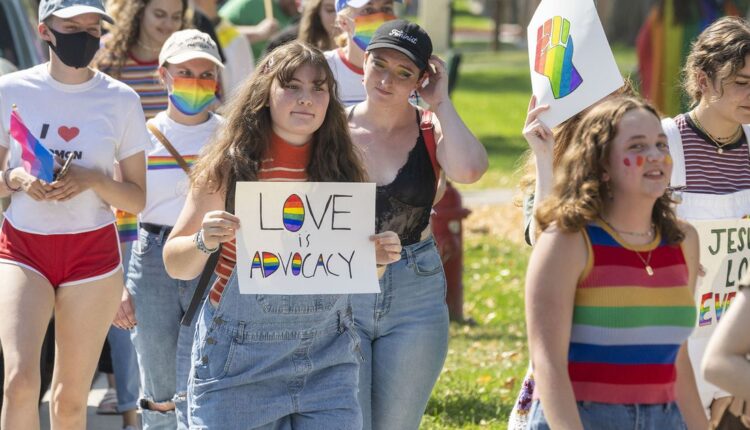 “I thought I was alone, but I am clearly not” – BYU students and Provo residents gather for the LGBTQ festival

More than 1,000 people gathered for the Back 2 School Pride Night in Provo on Saturday for a march, live music and speeches. Many of the Provo residents and the attending Brigham Young University students draped rainbow flags, trans pride flags, or bisexual pride flags like cloaks over their backs.

The festival took place in Kiwanis Park in Provo and was organized by The RaYnbow Collective, a student-run organization committed to providing safe spaces for LGBTQ students and allies at BYU.

Maddison Tenney, founder of The Raynbow Collective, founded the organization last year after seeing some anti-LGBTQ flyers saying, “Are you afraid of the rainbow?” published on the BYU campus. After seeing the flyers, she created an Instagram account and started organizing events like the Back 2 School Pride Night earlier this year.

“Our goal is to connect students with existing organizations and give students space to feel safe on and off campus,” said Tenney. “That is the aim of this event to connect students and community members so that they can support one another and be friendly with one another. Because there are so many resources out there. “

More than 30 canopies were lined up throughout the park, providing space for local artists and vendors to sell their wares, and LGBTQ people to learn more about organizations they can support. Community organizations, including Understanding Sexuality Gender and Allyship at BYU, BYUQ, Equality Utah, and Flourish Therapy, distributed brochures of available resources for LGBTQ people.

Vendors sold jewelry, hats with embroidered rainbows, and works of art. One seller sold a t-shirt with a giant arrow pointing up and the text “My gender is up here”.

The event began with a march along 900 East next to the BYU campus. Protesters cheered as cars honked their horns and shouted support from the street. A couple drove by on a motorcycle behind which hung a huge rainbow flag.

Many held up signs as they marched. “I would rather be sent to hell than live as a fanatic on earth,” read a sign. There were chalk drawings and short sentences, including one that read “Love is Intercession” on the sidewalk along the march.

Attendees returned to the park for an LGBTQ art show, speeches, and musical performances.

Bradley Talbot, who helped organize the rainbow-colored “Y” lighting in March, spoke to the crowd about his experience as a gay student at BYU. Talbot said he felt alone after a student in one of his classes asked why Church members should go out of their way to befriend LGBTQ people during a lecture.

“Four years ago I thought I was alone, but clearly I am not,” Talbot told the crowd.

Talbot worked with friends to illuminate the “Y” on the mountain above BYU’s campus as an explanation after the school removed the section that banned “all forms of physical intimacy expressing homosexual feelings” from its strict code of ethics had just to say that same-sex relationships were “incompatible” with BYU rules even weeks later.

Now that the fall semester is due to start next week at BYU, Talbot said it was “so heartwarming and comforting and encouraging to see so many people at the festival, and to feel like there are so many people, both in the queer community outside the community ”. who are here to listen and support each other wherever we are on our journey. “

Talbot said the support was especially significant after Elder Jeffrey R. Holland presented at the school’s annual university conference on Aug. 23, where he said BYU faculty and staff should use their intellectual “muskets” to fight the school Church of Jesus Christ to defend Latter-day Saints, particularly “the doctrine of the family and … marriage as the union of men and women”.

Following Holland’s lecture, a man threw a bottle of water at chalk art messages drawn on a sidewalk across from BYU in support of LGBTQ students and shouted a homophobic insult at some of the people gathered there on August 27.

“To me, it feels like we’re doing something good because people are starting to notice,” Talbot said. “You don’t realize you’re okay until people start resisting you and you get a little bit of resistance. So with Elder Holland and all that chalk and all that can be said, people are intimidated. “

Married BYU students Thea and Rimington Manning-Neal heard about the event on Instagram and decided to attend to show their support. Thea said so after Holland’s speech and the support she received from members of the Deseret Nation, a group of Latter-day Saints who defend the doctrines and practices of the Church online.

“We’re all just scared,” said Thea. “That’s why it’s really important to show that there are others here who don’t agree with this idea.”

Rimington said that “greater effort is needed to center the gospel focus on love for all, rather than on the rigidity of the commandments, for at its core, like that doctrine, is love.”

The couple expressed concern about the “hate sin, love the sinner” mantra that some members use to talk about LGBTQ people.

“That’s a terrible idea,” said Thea. “You can’t love the sinner, as the saying goes, if you hate a central part of your identity, so I just want to show that it doesn’t work. You just love everyone, no matter what. “

Kyle Ashworth, host of the Latter Gay Stories podcast that sponsored the event, said Latter-day Saints who began to have questions about their sexuality were traditionally trained to keep them calm. Events like the Back 2 School Pride Night create a safe space for these people.

“Seeing something like this on or off a BYU campus in Provo, the heart of the Lions Den, is quite remarkable for the LGBTQ community,” said Ashworth. “That means people stand up and say that the rhetoric of the church does not match the real, lived experiences of our gay or transgender family members.”

Ashworth said that it is easy for members who have questions about their sexuality or gender to feel alone in their experience because they cannot openly express those thoughts. He had a message for LGBTQ members who may think so.

“Events like this show that there is a community of people out here who support you, that your unique circumstances, which you thought were unique to you, are shared by so many.”

That’s why Ashworth, a returned missionary who got married in the temple before coming out gay, started the Latter Gay Stories podcast. He wore an individually printed T-shirt showing Otto Pankok’s painting “Christ breaks the gun”, but the aura that surrounds Jesus is rainbow-colored.

He encouraged Church members to attend events like Pride Night so they can “get ahead of the queer experience.”

The RaYnbow Collective will be hosting free diversity and equality training for all BYU students, faculty and staff “over the next several months,” in partnership with Equality Utah, said Tenney, who works to achieve nonprofit status for the organization while doing them plans future events for LGBTQ people and allies.

Tenney wanted LGBTQ students to know, “There is a community of people who loves them and wants them here at this university and in this church. And they deserve to be here if they want to be here. And if you want to stay [in the church], we will support you and we will take care of you. If you don’t want to stay, we’ll help you wherever you are on your trip. “