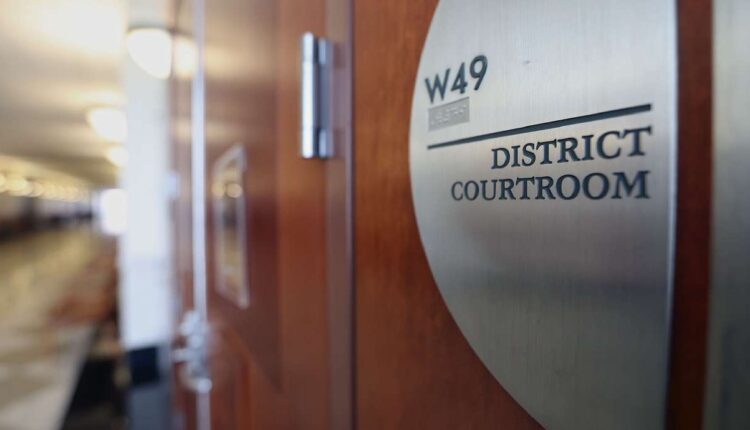 A jury trial for John Redmond, an Illinois trucker accused of sexually assaulting a woman who worked as an escort in Salt Lake City, occurred this week in the Matheson Courthouse. The jury determined that Redmond is not guilty, and he will be released from jail. (Kristin Murphy, Deseret News)

SALT LAKE CITY — An Illinois trucker accused of sexually assaulting a woman in Salt Lake City is getting out of jail after a jury determined on Friday, after a four-day trial, that he is not guilty.

The jury was given the case Friday morning, after hearing closing arguments, and deliberated until about 8 pm At one point, they asked the court what would happen if they could not reach an unanimous verdict.

“Mr. Redmond has been jailed for a lot longer than the maximum penalty for unlawful detention,” 3rd District Judge Vernice Trease said.

She gave a sentence, minutes after the verdict was read, of 180 days in prison, and gave Redmond credit for time he has already served. Trease said that they would send an order of release to the jail on Friday night.

The accuser claims that she met Redmond while working as an escort and that she collected $200 for an hour of companionship, but that she refused any sexual advances when he offered her an additional $800 for sex. She said after that he threatened her with a gun and sexually assaulted her.

The woman said when testing at the jury trial that she went along with what he was doing because she was fearful.

She explained that as an escort she only provided companionship and would give “back tickles” but did not have sex with clients. After her interaction with Redmond, the woman said she left her position as an escort.

According to testimony at the trial, Redmond made a video of the woman where she said that the actions were consensual, and walked her out to her car. The woman then went to a hospital and told officials she had been assaulted.

Deputy District Attorney Brandon Simmons argued that even in the version of the story that Redmond told he could be accused of sexual assault, meaning it was not a “he said vs. she said” situation. He told the Redmond jury knew that his actions could be considered sexual assault but he acted anyway.

He argued that detectives not finding a gun does not mean that a gun didn’t exist and that Redmond would have had time to hide a gun. He asked the jury to find Redmond guilty on all counts.

Katherine Conyers, one of Redmond’s attorneys, said in her closing arguments that escort agencies often present provocative photos and give fake information, she said frequently escorts provide “upgrades” to make more money and that the government is aware of this because they require STD testing for business licenses.

She said the escort agency was hiding information, but that Redmond was not, he was open about what he was looking for and gave accurate information to the woman.

Conyers pointed out inconsistencies between the story that the accuser told to different police officers and inconsistencies in their testimony at the trial. She told the jury that the woman was following through with a threat that she would report him if he did not pay the $800 he had promised.

“It’s all about money,” Conyers said. She said Redmond not paying was “not right, but it’s not rape.”

She told the jury that Redmond is guilty of unlawful detention, for requiring the woman to stay and make a video when she wanted to leave, but that he is not guilty of aggravated kidnapping or sexual assault. The jury agreed with Conyers after reviewing the evidence.

An oil train is set to destroy pristine Utah mountains. Why won’t Biden stop it?