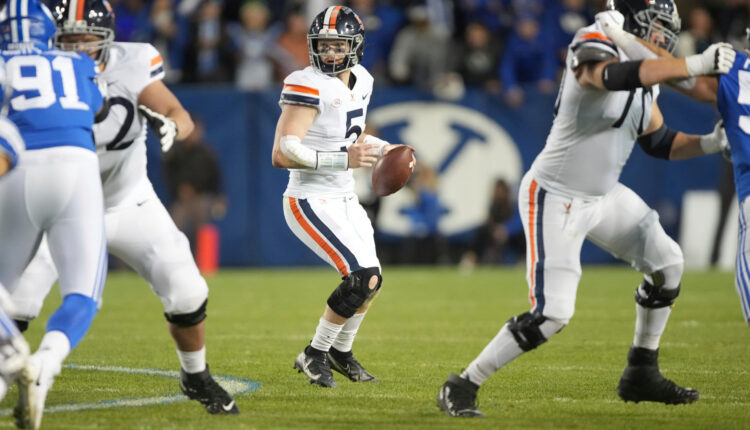 In the ACC, choosing the top quarterback will not be an easy task

(AP) – Someone is being snubbed.

Virginia has Brennan Armstrong, who is third in the country with 3,557 passing yards. Pittsburgh has Kenny Pickett, who entered the conversation with the Heisman Trophy with 32 touchdown passes this season. Wake Forest has Sam Hartman who could lead the Demon Deacons into the title game of the Atlantic Coast Conference. NC State has Devin Leary who threw 29 touchdowns.

When the All-ACC team comes out, at least one of those quarterbacks will be missing.

The All-ACC selection, which is expected to be announced early next month, consists of a first team, a second team, and a third team. That means three slots in each position, which means there is no shortage of ACC quarterbacks that will see their name on the Honorable Mention list – or not at all – and likely not be overly enthusiastic about this development.

“I don’t think any other quarterback in the country does more for his team than Brennan does for us,” said Virginia coach Bronco Mendenhall.

Interestingly, Armstrong’s value was possibly the most noticeable last weekend – when he was unable to play due to a rib injury. Virginia’s offense has averaged 39 points in Armstrong’s nine games this season; the Cavaliers managed three points without him in a one-sided loss to Notre Dame.

It’s unclear if Armstrong can leave this week if Virginia faces Pitt in a game that could end up winning the ACC Coastal title. If he does play, the game could just turn into an Armstrong vs. Pickett shootout.

Pickett’s numbers suggest he had a great season. But arguably the greatest contribution he made to Pitt’s success was when he called a team briefing after a disappointing early loss to Western Michigan.

“It depends on the management level, the leadership of Kenny Pickett,” said Pitt coach Pat Narduzzi. “You are only as good as your team. If you’re a player-led team, you have a chance at Kenny. I hope all of our young people learn from Kenny Pickett. “

At Wake Forest, they say the same thing about Hartman.

He is now the Demon Deacons record holder for career (63) and single-season (30) touchdown passes, is the catalyst for the top-ranked team at the conference and can round off Wake’s first trip to the ACC title game since 2006 with a Victory over Clemson.

It was on July 22nd when Wake Forest manager Dave Clawson said, “We’d love to come to that penultimate game against Clemson in November, which means a lot to both football teams.”

Hartman made sure that the scenario would happen exactly as Clawson envisioned, despite assigning much of the credit to his receiving corps.

“It has been the message all year round that we have two guys who know what they’re doing, get the ball and make plays, and also make plays after they catch the ball,” said Hartman. “It is an honor to be in my position.”

No matter how the All-ACC race develops, it will be a reminder that preseason polls and price lists often fall short when looking for the future.

The ACC’s preseason player of the year – with an overwhelming majority in the vote – was North Carolina quarterback Sam Howell, who started the season as the Heisman front runner, but a slow start of the tar heels made those plans fail. Miami quarterback D’Eriq King, Clemson quarterback DJ Uiagalelei and Boston College quarterback Phil Jurkovec also received ACC Player of the Year votes.

King’s season ended early with injuries. Jurkovec was injured and missed about two months. Uiagalelei and the Tigers needed time to find out for themselves.

Uiagalelei is 248 meters from 2,000 this season; When he gets there, it means that at least nine quarterbacks will hit that number in ACC 2021. Armstrong, Pickett, Hartman, Leary and Howell are already there, as are Malik Cunningham from Louisville, Tyler Van Dyke from Miami and Gunnar Holmberg from Duke. And all of those numbers are going to give voters a lot to consider when the time comes to hit those All-ACC quarterback picks.

“You must be exceptional in this position,” said Mendenhall.

Stranded by the Pandemic, He Had Only Travel Insurance. It Left Him With a $38,000 Bill.

Here are the latest purchases and sales from US retailers