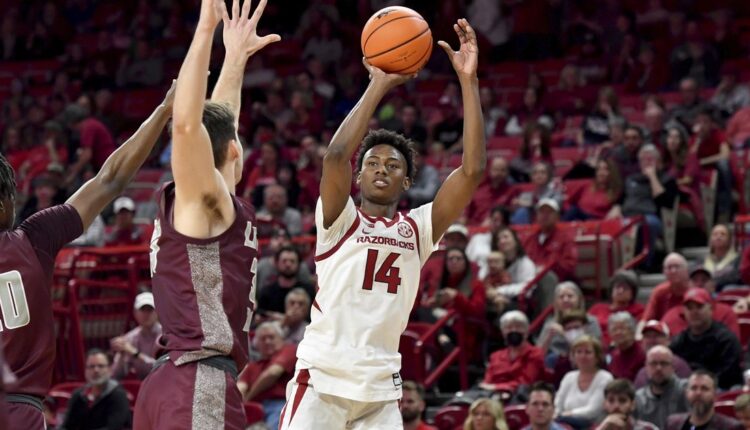 Jaxson Robinson is BYU basketball’s latest addition. What can the former Arkansas and Texas A&M product bring to Provo?

The number of available scholarships for the BYU men’s basketball team is down to one.

The Cougars picked up former Arkansas guard Jaxson Robinson from the transfer portal last week, making him the second transfer to join BYU over the offseason. He will need a waiver to be immediately eligible, but there is a feeling within the program the NCAA will grant it.

Robinson is a high-risk, high-reward player — typical for this late in the transfer cycle. He is already a two-time transfer who has limited experience at the college level. His length and size — at 6-foot-6, 185 pounds — theoretically translate to BYU’s system. But he will still be a project at 19 years old and having played in just 30 college games.

Out of high school, Robinson was a top-70 player in the country, according to 247Sports. He reclassified during his senior season to join Texas A&M early. After a year at College Station, the program over-recruited at his position and pushed him out.

At Arkansas, Robinson struggled to crack the rotation on an Elite Eight team. He played in just over 10% of the minutes and did not play in 17 games. When the Razorbacks added five transfers this offseason, and three top 15 high school recruits, Robinson entered the portal.

But with the late transfer window, it is harder to get the top talent in the transfer portal.

Robinson is seen as a good shooter with athleticism. Yet, his offense through the first two years of his career has been inconsistent and heavily reliant on three-point shooting. His high turnover rate has also made it hard for him to latch on at either stop.

BYU announced Tuesday that Athletic Director Tom Holmoe restructured the department as it prepares to join the Big 12 next year.

Holmoe named David Almodova, Dallan Moody and Trevor Wilson as senior associate athletic directors, all of whom will report directly to him. Tyson Hutchins is a new associate AD who will oversee creative strategy.

“Getting ready for the jump to the Big 12 is not just the responsibility of our student-athletes and coaches,” Holmoe said in a news release. “Every member of our BYU administrative, part-time and even student staff is essential and is being asked to step up, with the structures and resources in place to help us be our best. These changes at the top of our leadership structure will set us up for success as we look to enter the Big 12 in a position of strength.”

• Women in Utah sports, including BYU’s Paisley Harding, reflecting on the 50th anniversary of Title IX.