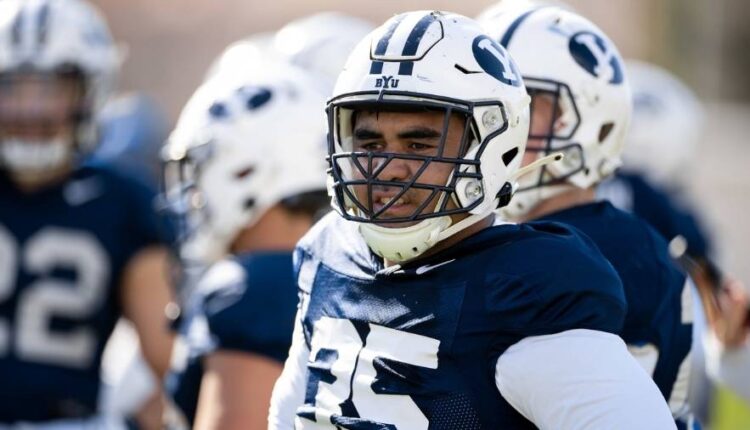 PROVO, Utah – BYU football is in a spot they aren’t used to in the Kalani Sitake era. Sitake’s seventh squad is a veteran team with lofty expectations.

After producing back-to-back double-digit win seasons, BYU is looking for more in 2022. So, where do newcomers factor into a team that is top-five nationally in returning production?

Kalani Sitake’s program has been a proving ground every day in practice. If a youngster emerges as the best player at his position, don’t be surprised if he plays. Some new faces will emerge on the depth chart this fall.

Newcomers to watch for BYU football in 2022

Most of the emerging players will likely be from BYU’s transfer portal pickups. But there’s always a freshman or two that comes onto the scene. It happens every year.

Here are six newcomers that could fit the billing and impact BYU football in 2022.

Brooks signed with BYU without visiting the campus. One of the big reasons he chose BYU without a visit was his familiarity with the team. He watched a lot of cutups of BYU’s offense last year due to BYU facing five Pac-12 opponents last season.

Brooks “shocked” BYU offensive coordinator Aaron Roderick and running back coach Harvey Unga with his knowledge of the BYU playbook entering spring ball. His knowledge of the plays, paired with his size at 6-foot-1, 235-pounds, make him an easy pick to try and replace Tyler Allgeier.

Roderick said at BYU Media Day that Brooks will have “the first shot at the job.”

BYU cornerbacks coach Jernaro Gilford made a big push to add cornerbacks to the 2022 roster. Since the beginning of this calendar year, Gilford has added seven cornerbacks, five of which hail from the high school ranks.

The high school prospects will be the cornerbacks of the future when BYU moves into the Big 12. One of those five prep standouts is Korbyn Green from Big 12 country.

A native of Tulsa, Oklahoma, Green arrived at BYU earlier this month. Of the prep players joining the team in 2022, he’s the best bet to have an opportunity at playing time.

At 6-foot, 175-pounds, Green has “pure corner” attributes in his game, making him a contender to play as a freshman. Gilford isn’t shy about playing newcomers. He did it with Chris Wilcox in 2016 and a young Malik Moore in 2018.

If Green does earn playing time this year, it will be because he can play press-man coverage and display an understanding of BYU’s zone concepts in fall camp.

BYU picked up quite a walk-on addition out of the transfer portal at Stanford’s Houston Heimuli. Last season, Heimuli was a captain for the Cardinal.

Heimuli is a bruising fullback that does all the little things you want on a football team. But don’t be surprised to see BYU OC Aaron Roderick find creative ways to expand Heimuli’s role.

Imagine a personnel package that includes Heimuli and fellow fullback/tight end Masen Wake on the field simultaneously. Roderick has some intriguing personnel options in front of him.

Gabe Jeudy-Lally transfers into BYU football from Vanderbilt, where he was a starting cornerback for the Commodores. What’s interesting about Jeudy-Lally is that he still has three years of eligibility remaining, despite already racking up three years of experience in the SEC.

A graduate transfer, Jeudy-Lally graduated from Vanderbilt in three years. He picked BYU after an official visit to campus during BYU’s spring practices in March.

Jeudy-Lally is a 6-foot-2, 185-pound player to play in the NFL in the future. BYU CB coach Jernaro Gilford has returning starters D’Angelo Mandell and Kaleb Hayes atop his depth chart entering fall camp, but Jeudy-Lally will push them.

The highest-rated high school signee in BYU’s 2022 recruiting class will have a chance to contribute in 2022. Aisea Moa joins a defensive line room that returns nearly everyone except Uriah “Lopa” Leiataua. So to break through, he will likely need to be a consistent player in fall camp, showing he can deliver on his one/eleventh.

Heading into training camp, Moa is in the third and fourth unit at the outside edge spot. BYU’s depth chart on Media Day included Tyler Batty, Alden Tofa, and Fisher Jackson in front of the former four-star prospect from Weber High.

BYU defensive coordinator Ilaisa Tuiaki believes his defensive line has 12 players that can contribute in games; Moa could factor into that group.

Oregon transfer Kingsley Suamataia was one of the blue-chip prospects in the 2022 transfer portal cycle. 247Sports had him as the No. 6 prospect behind only guys like Texas QB Quinn Ewers, Alabama RB Jahmyr Gibbs, and USC’s Caleb Williams and WR Jordan Addison. Top shelf names in college football.

Suamataia checks in at 6-foot-6, 330-pounds, and on his first day of spring practice at BYU, he was lining up with what appeared to be the first offensive unit at right tackle.

BYU’s offensive line was deep before Suamataia’s arrival. Now OL coach Darrell Funk has numerous options at the tackle spots. Blake Freeland will be the starter at left tackle, with Kingsley having a great shot at anchoring the right spot.

He will have to beat some talented competition to be in the starting five along the offensive line. Harris LaChance was BYU’s week one starter last year at right tackle. Campbell Barrington was a freshman All-American and Brayden Keim has turned himself into one of the most improved players in the program after converting to tackle from tight end.