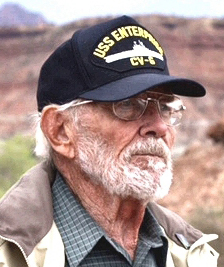 Joseph “Joe” Seabury Johnson was born April 23, 1923, in Columbia, South Dakota, to Ralph and Elva Johnson. He passed away on Oct. 12, 2022, at the Veterans Home in Ivins, Utah. He attended a one-room grade school in Columbia High School. He was drafted into the Navy in November 1942 and served for two years on the USS Enterprise, receiving nine battle stars.

On June 23, 1946, he married Yvonne Ferguson (later divorced). They had four children: Randy, Gayle, David and Nancy Joe graduated from the College of Engineering at Utah State University in 1950. In 1953 he was hired by the Salt Lake Area Vocational School to establish a program in building construction and served in that capacity for six years. He then taught math for four years.

In 1955 he moved his family to Bountiful, Utah. In 1965 the State of Utah bought 106 acres on Redwood Road in Salt Lake City. Joe was made superintendent of Building and Grounds and was in charge of the construction of the new campus. He worked in that capacity for 15 years. The school would eventually become Salt Lake Trade Technical Institute, then Utah Technical College and is currently known as Salt Lake Community College. In 1964 Joe was the Worshipful Master of Bonneville F&AM Lodge 31 in Bountiful, Utah.

In 1982 he was elected to the Daggett County School Board and served for four years. He was appointed to serve a four-year term on the Uintah Basin Area Vocational Center (UBAVC), the last two years as president. In 1984 he was appointed to the State Advisory Council for Vocational Education. In 1985 he was one of three names submitted to Gov. Matheson for a seat on the Utah State School Board. Joe often joked that the governor, because of his better judgment, made the decision not to pick him. Joe also served as the Daggett County Building Inspector.

In 1987 he moved back to Columbia, South Dakota. Joe always enjoyed his yearly trips to Alaska to salmon fish. He loved fishing for the big one at Flaming Gorge and he loved hunting ducks, geese, elk and deer. His other big hobby was woodworking. Over the years in Utah, he built many custom homes in Davis and Salt Lake County. He enjoyed speaking to students at high schools in Aberdeen, South Dakota, and St. George, Utah, about his experience serving on the USS Enterprise during World War II. In 2015 he moved to St. George, Utah.