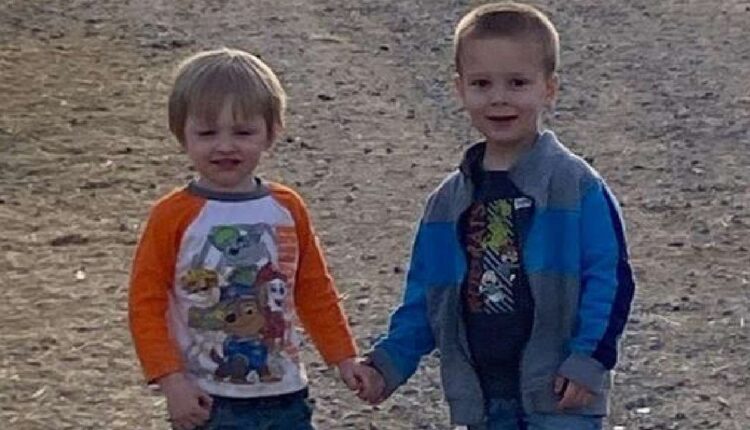 Odin Jeffrey Ratliff and Hunter Charlies Jackson, both 3 years old, were hit and killed by a car that crashed into the corral they were playing in in Eagle Mountain on May 2. The driver of that car has been charged with two counts of manslaughter. (Cedar Valley Stables)

PROVO — After considering the evidence for charges related to a crash in Eagle Mountain that killed two 3-year-old boys who were playing in a corral, a judge said he cannot yet make a ruling on whether there is enough evidence for the driver to stood trial.

Kent Cody Barlow, 25, was charged in 4th District Court with two counts of manslaughter, a second-degree felony, and one count of possession or use of a controlled substance, a class A misdemeanor. During a preliminary hearing Thursday, Judge Robert Lund said there were too many questions left unanswered for him to make a ruling and asked for the following:

On the evening of May 2, Odin Jeffrey Ratliff and Hunter Charlies Jackson were playing with toy trucks and front-end loaders in a corral at the Cedar Valley Stables, near 2300 North and 16000 West, when the car Barlow was driving left the nearby road , crashed through the stables and hit them. Law enforcement officials said they were both killed instantly.

Barlow’s family members and family members of the boys were listening in the courtroom during Friday’s hearing as two passengers in the car and a detective who was assigned to investigate the incident tested about what happened that night.

Taylor Kartchner, a passenger, said he had been driving his car while Barlow, who had invited him and his passengers to his home, was driving behind them from Saratoga Springs to Eagle Mountain. Barlow challenged Kartchner to a race multiple times, he said, and the two cars raced on a two-lane road near the Eagle Mountain fairgrounds.

After the race, he said Barlow invited Kartchner and the other two people with him into Barlow’s car to show off his car. Kartchner said he assumed at the time that Barlow wanted to show how fast the car could go. He said they were in Barlow’s car for only a few minutes before each of the passengers in the car were asking Barlow to stop as he was drifting on corners and traveling quickly.

“Everybody in the car had started telling Kent to slow down and to chill out,” Kartchner said.

Kartchner said the car was approaching a stop sign at a fast speed while still accelerating and he was worried the car would flip.

Kartchner said the car hit a dip in the road and Barlow lost control, crashing through a fence. After the car stopped, Kartchner said he left the car and remembers seeing multiple men and a woman screaming, the woman running across the field. He learned they were screaming because the car had hit two kids.

Another passenger, Jeremy Gomez, said he saw the car had reached 80 mph but stopped looking at the speedometer after that point, although he could feel the car was continuing to accelerate.

Investigation at the accident scene

Utah County sheriff’s detective Jake Hall, who is assigned as the case officer, said law enforcement was first called about the crash at 7:17 a.m. that evening and he responded to the scene shortly after.

“I could see a very long line of … destruction from the road,” Hall said.

He estimated the car stopped about 630 feet away from the stop sign and 230 feet off the road. The vehicle had come to rest with the wheels up, he said, and there was not much of the car left by the time it stopped.

The charge for possession or use of a controlled substance was added at the end of June after the other charges were filed in mid-May.

Hall said he later closed the roads near the intersection and attempted to guess how fast the car was going by going over the bump himself at different speeds. He said the bump is a variation in road heights where two roads cross at the intersection by the stable and could be felt when he was going 30 mph and 45 mph, which is the speed limit, but it did not affect his driving.

Hall said he felt it would be too dangerous to go over the bump over 65 mph, but even at 65 mph he could safely stop before the hole in the fence created during the crash on May 2.

After the hearing, Ryan McBride with the Utah County Attorney’s Office told reporters a judge waiting to make a decision, like Lund is doing, is not unusual in this type of case. He said he’s happy with how the evidence was presented at this hearing.

“I think it’s a fair likelihood that we’ll end up in trial in this case,” McBride said. “I’m not surprised that (Lund) didn’t rule today.”

He said they all want to be thorough, and so additional briefing on complex issues is expected. The attorneys will present arguments in a follow-up hearing later this month regarding whether the charges should be bound over for trial.

Utah County Attorney David Leavitt said previously there would be no room for plea bargains in this case.

Benjamin Aldana, Barlow’s attorney, said he wishes journalists would not share only what police and prosecutors give them but declined to make any statements about the hearing.