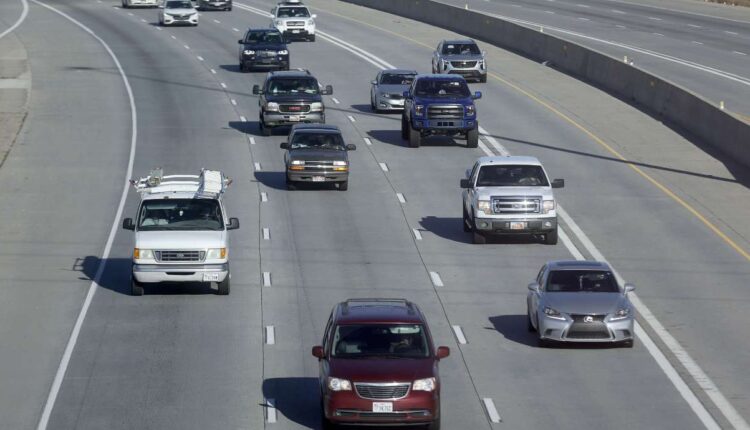 July 4 travel: When and where roads will be busy; national parks expect heavy traffic

Motorists drive on I-15 in Salt Lake City on Nov. 23, 2021. Fourth of July traffic is expected to create some headaches for drivers on I-15, especially on Friday and Monday, according to the Utah Department of Transportation. (Kristin Murphy, Deseret News)

It’s estimated that nearly 48 million Americans will travel for the major summer holiday, a figure that wouldn’t only be an increase of about 3.7% from last year’s holiday travel but would account for about 98% of travel in 2019 before the COVID-19 pandemic, according to AAA.

About 42 million people, nearly nine out of 10 people who will travel, will drive, while about 3.55 million will fly and another 2.42 million people will use bus or train, or will embark on a cruise. Rolando Flores, the senior vice president of membership and travel for AAA Utah, said last week that the growing demand witnessed by travel experts earlier this year “isn’t tapering off,” even as inflation increases the cost of travel.

“Even though things are more expensive, people want to travel and they are finding ways to still take that much-needed break,” he said in a statement.

So if you plan to travel in Utah during the long Fourth of July weekend, here’s what to expect.

Utah roads most likely to be impacted

Utah transportation traffic engineers believe Friday and Monday, the actual day of the holiday, will be the busiest days of travel this weekend, especially on Interstate 15 in and around the Wasatch Front.

As usual, the Utah Department of Transportation halted construction for the long weekend, opening as many lanes of travel as possible. However, some of the ongoing projects will still result in traffic disruptions.

Traffic may not be the only pain for those hitting the road in Utah. The average price of gas in the Beehive State, which surpassed $5 per gallon for the first time in history on June 9, is now up to $5.24, as of AAA data reviewed Thursday afternoon. Gas in Utah is about 39 cents above the national average.

It’s still generally cheaper to fill up in central and eastern Utah and more expensive in southwest Utah; however, average prices are all over the board altogether. As of Thursday afternoon, the five cheapest counties for gas in Utah are:

The five most expensive counties in Utah:

Of course, these numbers can easily change throughout the holiday weekend.

Utah’s state and national parks figure to be some of the top draws among those driving this weekend.

Although Yellowstone National Park will finally reopen its northern loop on Saturday for the first time after massive flooding damage closed it for weeks, Utah’s parks figure to be as crowded as ever this weekend, especially if tourists already decided to alter their travel plans elsewhere for the holidays.

For instance, Zion National Park officials are warning visitors to expect long lines at park entrances, visitor centers, restrooms and trailheads, as well as at shuttle stops in Springdale and within the park. “Heavy traffic” is expected in Springdale and throughout the park and officials say intermittent closures are to be expected at the park’s south and east vehicle entrances.

Jeff Bradybaugh, the park’s superintendent, said the park is partnering with the town of Springdale to manage the heavier traffic that is forecast this weekend. Utah state Routes 14, 20 and 59 all figure to be particularly busy, along with US 89 in the region.

“Independence Day is on a Monday this year, so we’re planning for a busy weekend,” Bradybaugh said in a statement Thursday. “On holiday weekends, we typically see more visitors arrive at the same time than on other busy summer days.”

Water-based states and national parks are all expected to be busy this weekend, which may result in longer boat inspection lines.

High temperatures are expected to remain in the 90s across the Wasatch Front and around 100 degrees by St. George over the weekend.

More scattered showers are forecast across Utah on Friday but a low-pressure system is expected to arrive this weekend, pushing away the wave of monsoonal moisture that’s helped Utah this week, according to KSL meteorologist Matt Johnson. This is also expected to dry up the state this weekend.

Full seven-day forecasts for areas across Utah can be found online at the KSL Weather Center.

Airport and other transportation

Thursday and Friday are the biggest flying days at Salt Lake City International Airport, based on airline ticket sales. Nancy Volmer, the airport’s spokeswoman, said upwards of 26,000 passengers are expected at the airport’s front doors each day, though that projection doesn’t take into account arriving passengers or those making connecting flights.

Travel at the airport cools down a little after that. Experts previously warned passengers of possible flight delays and cancellations nationwide for the holiday weekend and throughout the summer, which is why they ask travelers to be patients.

Meanwhile, the Utah Transit Authority is reminding public transit riders that it will run a regular weekend schedule Saturday and Sunday and then a Saturday schedule again for the holiday on Monday. That means TRAX light rail trains will run every 30 minutes instead of every 15 minutes.

People who plan to attend the Stadium of Fire event in Provo can use their ticket as a form of transit payment, according to the agency.

19 more Utahns died of COVID-19, and the number of cases is on the rise