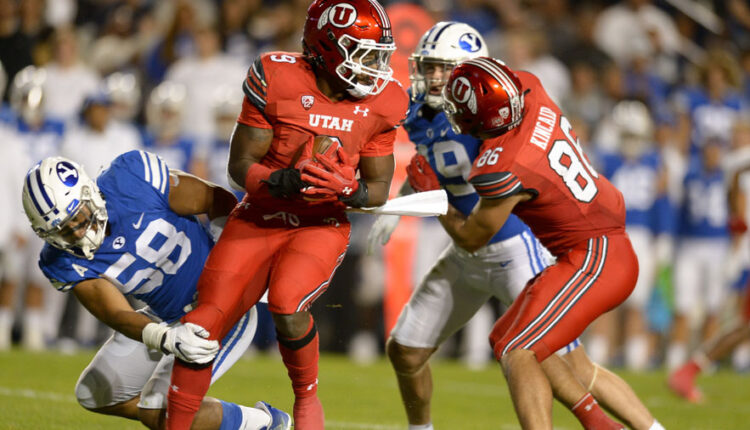 SALT LAKE CITY, Utah – After tinkering with the ball twice in so many games this season, Tavion Thomas will have to climb a big hill if he is to take the lead again for Utah.

Although Tavion Thomas stormed 107 yards and two touchdowns in the season opener against Weber State, he fumbled the ball. On Saturday night in Provo, Thomas fumbled the ball in second possession. He finished the game 29 yards on seven carries in the loss to the Cougars.

Utah head coach Kyle Whittingham talked a lot of Thomas during fall camp, showing that he was the lead for the Utes after the season opener. After fiddling with the ball twice in so many games this season, Whittingham is unwilling to give up Thomas.

“Yeah, it’s extremely frustrating,” Whittingham said after the game. “But you have to take care of the soccer ball, you can’t put it on the ground. There was actually one more that was stripped off. Fortunately, his knee was down so it wasn’t counted, but it was a streak nonetheless. He has to do a better job to secure football, that’s task one, if he can’t secure football, he can’t play now, there is no way we are going to give up Tavion. But you can’t make the ball turn over. He just has to fix it and work on it with him every day in practice. He got better, but tonight he saw again that two were scored in two games and that’s too much.

Thomas began his career at Cincinnati, where he spent two seasons. He then moved to Independence Community College before moving to the Utes. After Thomas went to the bank after the fumble against BYU, Micah Bernard went out and had a career night.

Utah will finalize its no-conference schedule against the state of San Diego in Carson, California on Saturday, September 18. Kick-off is at 5 p.m. MDT on CBS Sports Network.

Trevor Allen is a Utah Utes Insider for KSLSports.com, co-hosted Faith, Family, and Soccer podcast with Clark Phillips III and hosted the Crimson Corner podcast. Follow him on Twitter: @TrevorASports.