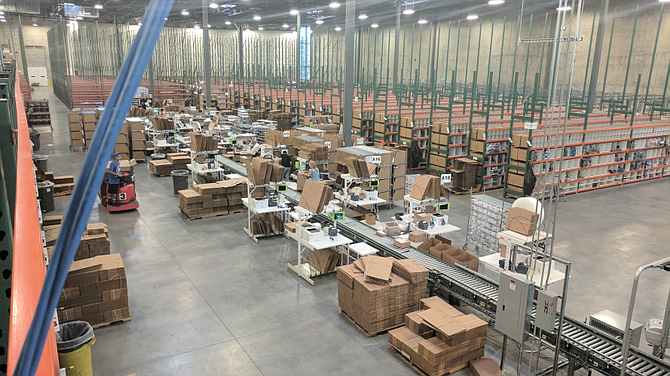 City of Industry-based Whiplash Inc. announced that it has acquired a Utah-based third-party logistics and fulfillment provider on undisclosed terms.
Founded in 2011, Enlinx operates a 400,000 square foot distribution center in Salt Lake City, where it also offers fulfillment services such as: The company with 246 employees can also process returns.

The acquisition expands Whiplash’s presence in the rapidly growing Intermountain West region, which lies between the Rocky Mountains to the east and the Cascade Range and Sierra Nevada to the west.

“We were drawn to both the geography and the job market,” said President and Chief Commercial Officer Greg Morello. “We believe that Salt Lake City will be a long-term shipping hub for us, especially for our e-commerce customers, and we expect to open additional facilities in this market as part of the strategy of this acquisition.”

“We are seeing increasing demand for regional markets, like the Salt Lake City area, which can serve the Southwest with 1-2 day ships, and this is directly related to the population movement from the coast to areas like the Southwest and the Southeast.” added Morello.

Whiplash, which the Business Journal estimates had sales of around $ 300 million last year, employs around 3,500 full-time and seasonal employees. The company operates 18 facilities, totaling approximately 6.7 million square feet, near major local ports as well as in Ohio, Washington, Georgia and New Jersey.

Whiplash, formerly known as Port Logistics Group, handles warehousing and distribution for national apparel and consumer goods retailers, including Macy’s Inc. and Bed Bath & Beyond Inc., as well as the physical footprint for digital native brands like Moda Operandi Inc., Goop Inc. and Betabrand.
Whiplash’s transportation department picks up international cargo from major ports and delivers it to their warehouses for processing, while the brokerage department can organize the transportation of goods by truck or freight train to other locations.

The company also provides value-added services such as hanging clothes, re-labeling goods for various retail stores, processing online orders and managing inventory, and shipping direct to end users on behalf of retailers.
With Whiplash, Enlinx becomes part of “a much larger network that enables dual or multinode fulfillment strategies, something we have not been able to offer in the past and still receive the care they can rely on,” Enlinx founders and Chief Executive David Burns said in a statement. “The Whiplash technology and the relationships with the major parcel delivery companies round off a highly productive partnership.”

Burns and co-owner Ken Thompson will remain on board until the end of the year and then move into advisory roles in 2022.
The Enlinx acquisition follows the opening of a 261,400 square foot distribution center in Columbus, Ohio in May. The company said the facility expansion was “a response to the ongoing demands of the Covid-19 pandemic,” including the need for improved security protocols like social distancing for warehouse workers, as well as an increase in order volume as consumers panned home delivery offers.

The Port Logistics Group was founded in 2008 through the merger of three regional logistics service providers. Endeavor Capital, which has an downtown office, acquired the company in 2014 and was renamed Whiplash earlier this year.

For reprint and license inquiries for this item, CLICK HERE.