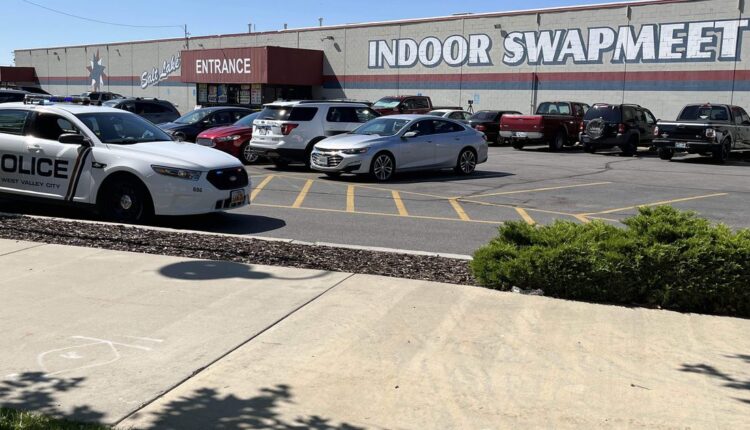 Police said the man was a suspect in an earlier shooting and has been taking to the hospital.

(Andy Larsen | The Salt Lake Tribune) Police vehicles are shown parked near the scene of a shooting in West Valley City on Sunday, Aug. 7, 2022.

A man is in serious condition Sunday after being shot by a police officer near Salt Lake Indoor Swap Meet, according to West Valley City police.

Just after 1 pm Sunday, West Valley City police received a 911 call about a shooting that had occurred at a Carl’s Jr. restaurant near 3500 South and Redwood Road. Officers were dispatched to a shooting near a Carl’s Jr. restaurant, where, according to police, they found a 41-year-old man who had been shot, the bullet grazing the man’s head. The victim declined to be transported to a hospital and was treated at the scene, the police said.

When officers arrived, the suspect had left the scene, so police said they started searching nearby areas. Police said they found a suspect matching the description of the shooter outside of Salt Lake’s Indoor Swapmeet on 3500 South and about 1500 West. Three officers from the Taylorsville Police Department arrived at the scene, along with West Valley City police.

“At some point during that contact, shots were fired, and the suspect was hit,” West Valley City public information officer Roxanne Vainuku told The Tribune. The only officer who fired was a West Valley City officer, according to Vainuku.

The man was then transported to a hospital in serious condition, according to police, and no officers were hit or injured in the shooting. Vainuku said that they’re unclear “about the dynamics of the incident,” whether the suspect also fired a gun or how many shots were fired, but that a gun was found on the ground among “personal effects” outside of the swap meet. It wasn’t clear if that gun belonged to the man shot by police.

An investigation into the shooting is underway at the scene and being led by officers from the Salt Lake City Police Department, according to police. Portions of the parking lots at both the Carl’s Jr. and swap meet remained closed off by yellow crime scene tape through late Sunday afternoon, though both businesses were open.

Sunday’s shooting marked the 11th police shooting in Utah so far this year, according to a database maintained by The Salt Lake Tribune