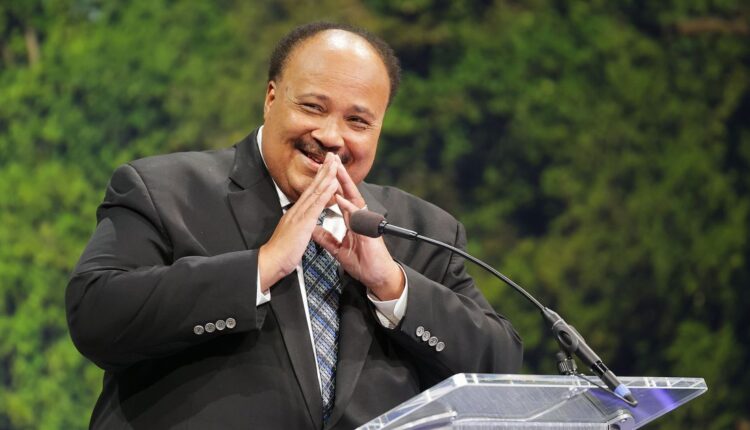 They responded with a rousing standing ovation.

“Your leadership is urgently needed to lead our world towards a greater destiny,” said King, his voice building towards the end of a rousing forum address at the Marriott Center on the BYU campus in Provo, Utah.

“Rise up and stand up against poverty, racism, war and violence,” he said in front of a picture of the Lincoln Memorial in Washington, DC. Rise up and practice nonviolent movements to feed the hungry. Stand up and use your economic might to support a culture of nonviolence. Stand up and work for peace, dignity and human rights for all people in every nation. “

The following standing ovations were repeated as King left BYU’s new, circular platform. About two dozen black students stood in their places at the foot of the stage, right fists raised.

“That was a message of solidarity. There aren’t many black students at BYU, ”said Nate Byrd, co-president of the Black Student Union and a psychology major from Canton, Michigan. “It was also a greeting to him and his father, a moment of respect and solidarity.”

King was the first to speak in the BYU 2021-22 series of “Creating a Beloved Community” forums at a time when university administrators are grappling with racism and building a new membership office.

An estimated 7,291 people attended the speech, according to staff at the Marriott Center Special Event. 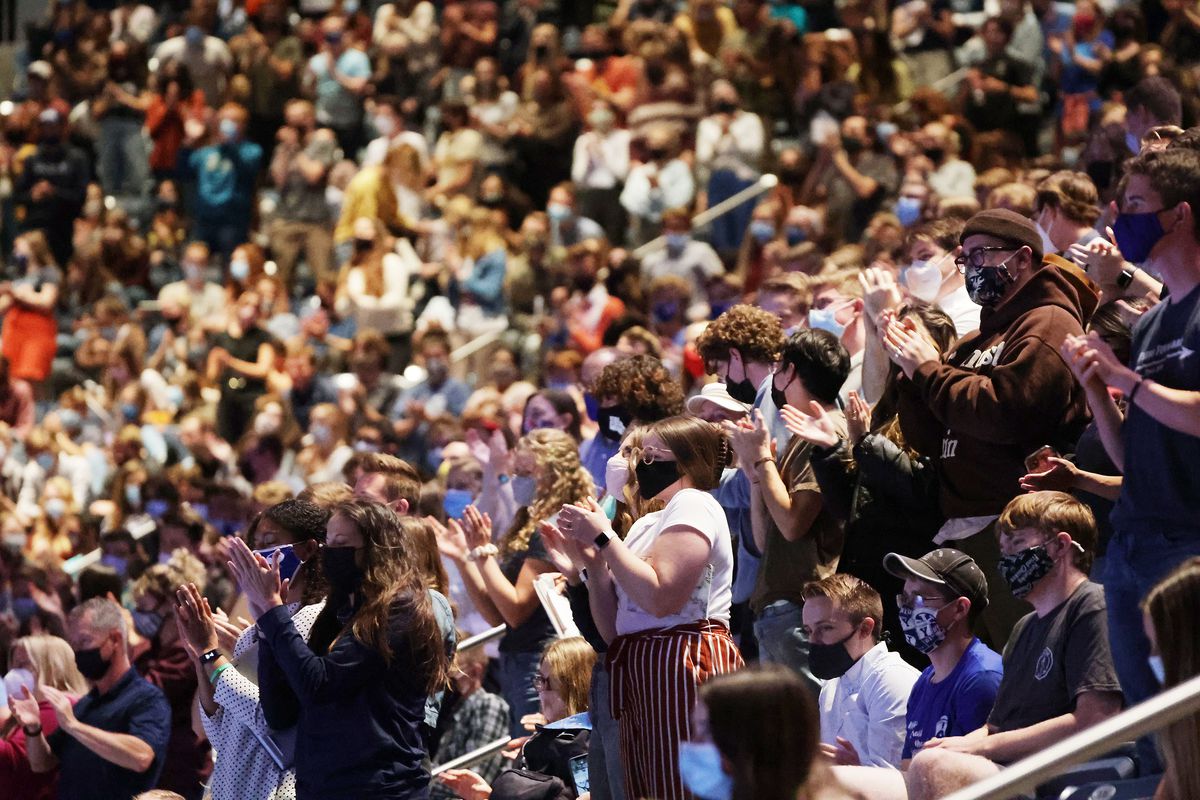 “I call on you to embrace a courageous and courageous spirit of compassion and caring that aligns to serve the poor and oppressed, the disadvantaged, oppressed and broken people of our communities,” said King.

He also called on them to stand up for civil and human rights.

Many of his subjects were familiar to BYU students, most of whom are members of The Church of Jesus Christ of Latter-day Saints.

All people are children of God

He brought up an issue that church leaders have emphasized time and again, that all human beings are children of God.

“To begin building the fellowship we love, we must embrace the belief that we are ultimately all brothers and sisters in the great human family,” King said. “It means working together to create communities that have no borders between black, white, red, brown and yellow. We are all members of the same family because we are all children of the same God. “

Students, faculty, staff, and members of the public applauded when King said a higher kind of love is the essential foundation of the beloved community.

“Our challenge today is to accept unconditional love and declare ourselves citizens of the community we love,” he said. “We must affirm the sisterhood and brotherhood of all people – every race, every ethnic group, every religion, young and old, women and men, gays and lesbians, people with disabilities – every person.” 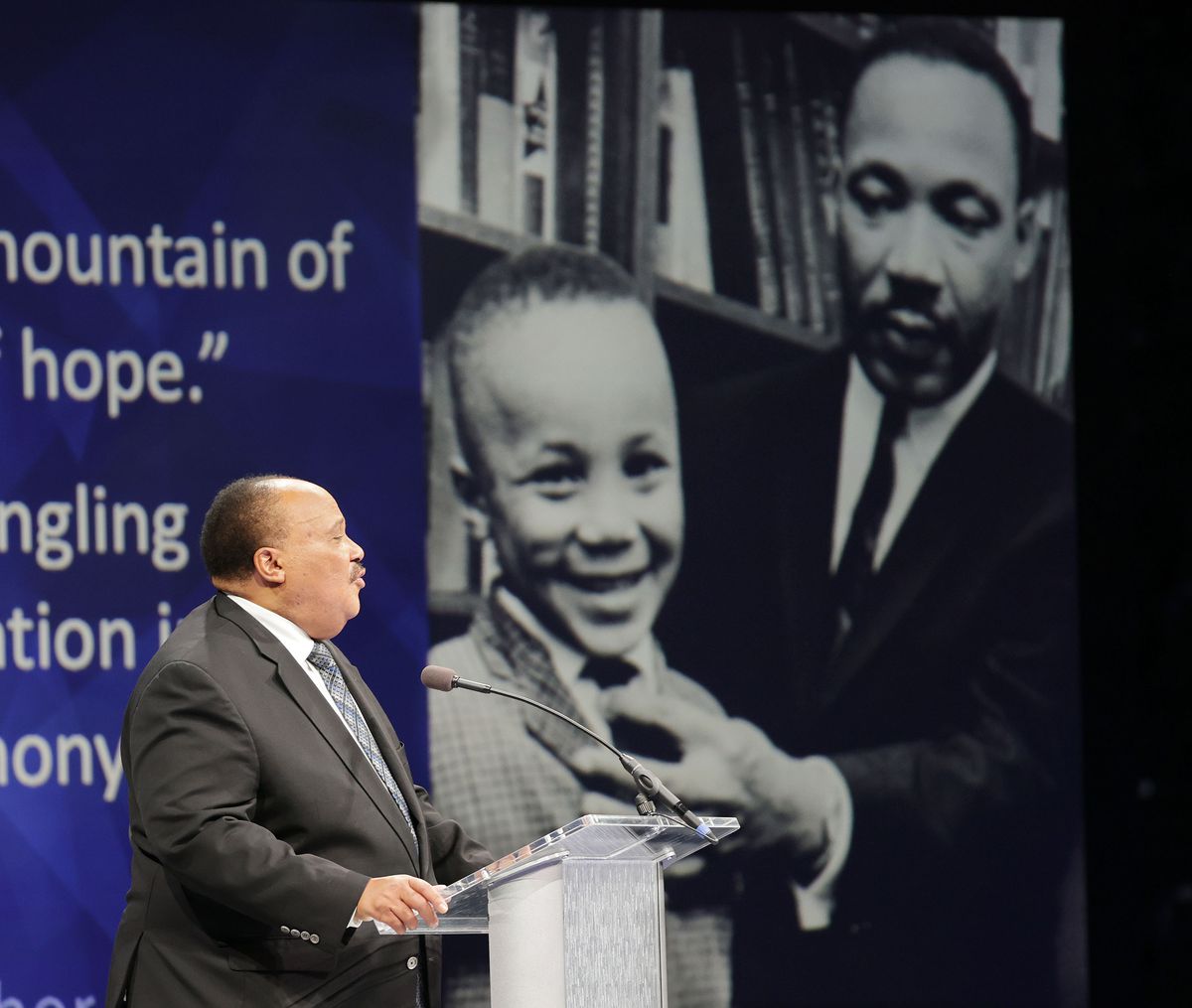 A shared vision of a greater love

Rev. Martin Luther King Jr. began talking about a loved one 65 years ago, a place where all people live in peace and harmony and work to help others. For a dozen years he used the Greek word agape to describe the kind of love required for this community. Latter-day Saint leaders such as BYU President Russell M. Nelson in 1995 and others have repeatedly taught agape.

“Those who learn to express love in creative ways are the healers and guides who pave the way to the community they love,” King III said during the forum on Tuesday.

In his father’s dream, this community does not tolerate poverty, hunger and homelessness, “because human standards of decency do not allow this,” he said. “Racism and all forms of discrimination, bigotry and prejudice are being replaced by an all-encompassing spirit of sisterhood and brotherhood.”

Citizens of the beloved community stand up against bullying, corruption, exploitation and war and stand up for peace, justice and reconciliation. Such a community provided decent jobs, decent homes, quality education, justice and health care. It also requires interracial collaboration and creative altruism, creative activism, and creative leadership.

“Love and trust will triumph over fear and hate,” King said.

Tuesday was also National Voter Registration Day, and King’s call for support for the vote was met with applause.

Service as a healing force for reconciliation

He called service a spiritual commitment and the highest form of leadership.

“Service is a powerful healing force that builds bridges of hope, trust, and kindness across chasms of alienation and suspicion,” said King. “It is a powerful force for transformation because it creates a connection between the server and those being served.”

The audience applauded as he quoted his father’s speech about the service.

Byrd, the co-president of the Black Student Union, sat in the front row on the arena floor with his large gray backpack with a badge that read “I can’t breathe”. He asked King during the Q&A session about the forum how he could balance his desire for love with his anger at the slowness of change.

“The fact that you’re black at BYU and most of the students are white shows that you’re already doing it,” King said. BYU consists of 81% white and 1% black.

King advised Byrd to strengthen himself through prayer, meditation, fasting, and edifying readings. He confirmed Byrd’s anger, saying that his own father was often frustrated and angry but always tried to speak and lead nonviolently. He also encouraged Byrd to work with a group of others and count their accomplishments, however small they may be.

Calling his father’s philosophy of non-violence a powerful tool for leaders who wanted to build a beloved community, King noted that he used it to “achieve all the victories of the American civil rights movement.”

But he also said non-violence is “a powerful tool for revolutionary personal transformation” because it offers a greater sense of wholeness and meaning and an advantage in dealing with conflict and disputes. It empowers people to become leaders and “a force for justice, peace and human rights”.

Byrd said it felt special to have King at BYU.

“I could definitely see a look at his father in him,” said Byrd. “It was good to see someone on this stage who looks like us.”

Other black students were grateful too.

“It was really special to be at the top,” said Tendela Tellas, Byrd’s co-president with the Black Student Union majoring in global studies and anthropology from Indianapolis, Indiana. “We could concentrate on him. For 50 minutes he was in charge and everyone listened, even the whites. “

Tellas and other students also enjoyed the opportunity to raise their fists.

“Having that moment of solidarity, being seen for those few seconds, felt good,” she said.

They also left with a desire to act, said Joshua Beecham, an experience design and management major from Tomball, Texas.

“We are ready to take on the task of becoming the new leaders he spoke of.”

King’s forum address can be found at BYUtv.org.

Go behind the scenes of what is happening to Latter-day Saints and its members.

The water releases from the Flaming Gorge Reservoir are decreasing