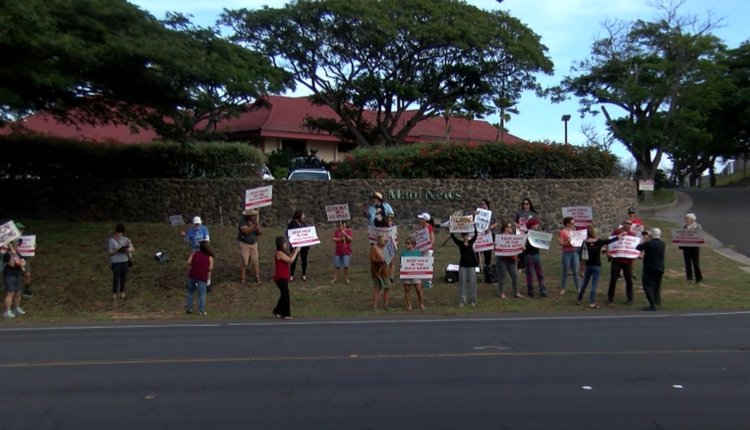 Maui News employees fear their livelihoods, ‘soul of newspaper’ is in jeopardy

WAILUKU (HawaiiNewsNow) – Matthew Thayer has been a photojournalist for The Maui News for 42 years. He’s usually behind the camera, telling other people’s stories.

But this time, he stepped out in front of his lens to share his.

Thayer and his colleagues held an informational picket outside their workplace off Mahalani Street in Wailuku Tuesday afternoon to raise community support.

They said their beloved newspaper, a staple in the community for 122 years, is in jeopardy.

Their union, The Pacific Media Workers Guild, is in the middle of contract negotiations with The Maui News’ owners — West Virginia-based Ogden Newspapers.

Representatives said Ogden also wants to reduce the work week by 20% to 25%, which also cuts pay.

“Many of us already have two or three jobs,” said Thayer. “So, that cuts into the quality of the product. We would like to see some new or progressive ways to handle this new economy.”

“It seems like their answer to everything is cut.”

Robert Collias has been a sportswriter for The Maui News for 32 years.

“I love The Maui News. I absolutely love my job,” Collias said. “I still love my job.”

Collias said it’s taken a lot for them to get to this point. But he says he can’t stand back and watch the paper dwindle any longer.

“We are the heartbeat of Maui. We believe we are an integral, absolutely necessary part of this island,” Collias added.

“This community needs us. They need us in the most functional way we can be, and to get that, we need a fair contract.”

At one point, The Maui News had about 30 employees in the newsroom. Now, they are down to nine.

Staffers said the majority of them haven’t had a pay raise in 20 years. Some of them even received pay cuts over the years.

Union representatives said Ogden Newspapers’ proposals would allow them to outsource jobs to other states, even overseas.

“We’re worried that if that happens, local names, local traditions, local places, local landmarks, local everything would be in jeopardy as far as what gets reported correctly,” Collias said.

Union representatives said Ogden Newspapers has engaged in practices that have led to multiple federal allegations of Unfair Labor Practices.

I have made the decision not to publicly comment on private contract negotiations, and to do all of our bargaining at the bargaining table. I am genuinely working hard to reach an agreement that is acceptable to all parties, and I remain hopeful that the Pacific Media Workers Guild is working towards that same goal.