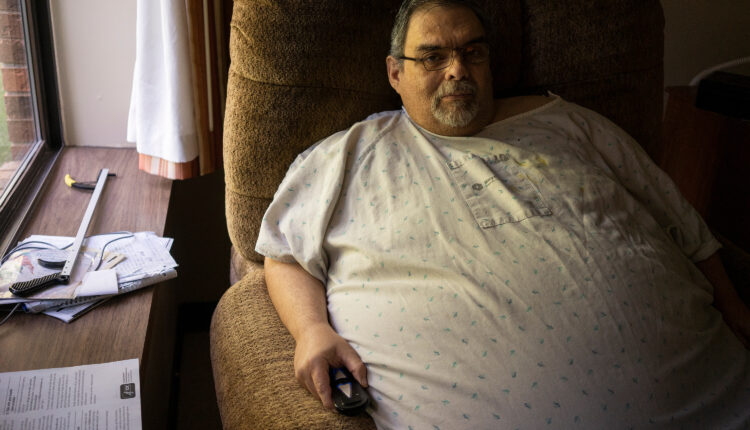 NEWTON, Iowa — Jeff White knows what can happen when 911 dispatchers receive a call about someone who feels despondent or agitated.

He experienced it repeatedly: The 911 operators dispatched police, who often took him to a hospital or jail. “They don’t know how to handle people like me,” said White, who struggles with depression and schizophrenia. “They just don’t. They’re just guessing.”

In most of those instances, he said, what he really needed was someone to help him calm down and find follow-up care.

That’s now an option, thanks to a crisis response team serving his area. Instead of calling 911, he can contact a state-run hotline and request a visit from mental health professionals.

The teams are dispatched by a program that serves 18 mostly rural counties in central and northern Iowa. White, 55, has received assistance from the crisis team several times in recent years, even after heart problems forced him to move into a nursing home. The service costs him nothing. The team’s goal is to stabilize people at home, instead of admitting them to a crowded psychiatric unit or jailing them for behaviors stemming from mental illness.

For years, many cities have sent social workers, medics, trained outreach workers, or mental health professionals to calls that previously were handled by police officers. And the approach gained traction amid concerns about police brutality cases. Proponents say such programs save money and lives.

But crisis response teams have been slower to catch on in rural areas even though mental illness is just as prevalent there. That’s partly because those areas are bigger and have fewer mental health professionals than cities do, said Hannah Wesolowski, chief advocacy officer for the National Alliance on Mental Illness.

“It certainly has been a harder hill to climb,” she said.

Melissa Reuland, a University of Chicago Health Lab researcher who studies the intersection of law enforcement and mental health, said that solid statistics are not available but that small police departments and sheriffs’ offices seem increasingly open to finding alternatives to a standard law enforcement response. Those can include training officers to handle crises better or seeking assistance from mental health professionals, she said.

The shortage of mental health services will continue to be a hurdle in rural areas, she said: “If it was easy, people would have fixed it.”

White has lived most of his life in small Iowa cities surrounded by rural areas. He’s glad to see mental health care efforts strengthened beyond urban areas. “We out here get forgotten — and out here is where we need help the most,” he said.

Some crisis teams, like the one that helps White, can respond on their own, while others are paired with police officers or sheriffs’ deputies. For example, a South Dakota program, Virtual Crisis Care, equips law enforcement officers with iPads. The officers can use the tablets to set up video chats between people in crisis and counselors from a telehealth company. That isn’t ideal, Wesolowski said, but it’s better than having police officers or sheriffs’ deputies try to handle such situations on their own.

The counselors help people in mental health crises calm down and then discuss what they need. If it’s safe for them to remain at home, the counselor calls a mental health center, which later contacts the people to see whether they’re interested in treatment.

But sometimes the counselors determine people are a danger to themselves or others. If so, the counselors recommend that officers take them to an emergency room or jail for evaluation.

In the past, sheriffs’ deputies had to make that decision on their own. They tended to be cautious, temporarily removing people from their homes to ensure they were safe, said Zach Angerhofer, a deputy in South Dakota’s Roberts County, which has about 10,000 residents.

Detaining people can be traumatic for them and expensive for authorities.

Deputies often must spend hours filling out paperwork and shuttling people between the ER, jail, and psychiatric hospitals. That can be particularly burdensome during hours when a rural county has few deputies on duty.

The Virtual Crisis Care program helps avoid that situation. Nearly 80% of people who complete its video assessment wind up staying at home, according to a recent state study.

Angerhofer said no one has declined to use the telehealth program when he has offered it. Unless he sees an immediate safety concern, he offers people privacy by leaving them alone in their home or letting them sit by themselves in his squad car while they speak to a counselor. “From what I’ve seen, they are a totally different person after the tablet has been deployed,” he said, noting that participants appear relieved afterward.

In most cases, the Eyerly Ball crisis teams respond in their own cars, without police. The low-key approach can benefit clients, especially if they live in small towns where everyone seems to know each other, Van Horn said. “You don’t necessarily want everyone knowing your business — and if a police car shows up in front of your house, everybody and their dog is going to know about it within an hour,” she said.

Van Horn said the program averages between 90 and 100 calls per month. The callers’ problems often include anxiety or depression, and they are sometimes suicidal. Other people call because children or family members need help.

Alex Leffler is a mobile crisis responder in the Eyerly Ball program. She previously worked as a “behavior interventionist” in schools, went back to college, and is close to earning a master’s degree in mental health counseling. She said that as a crisis responder, she has met people in homes, workplaces, and even at a grocery store. “We respond to just about any place,” she said. “You just can make a better connection in person.”

Thomas Dee, a Stanford University economist and education professor, said such programs can garner support from across the political spectrum. “Whether someone is ‘defund the police’ or ‘back the blue,’ they can find something to like in these types of first-responder reforms,” he said.

Critics of police have called for more use of unarmed mental health experts to defuse tense situations before they turn deadly, while law enforcement leaders who support such programs say they can give officers more time to respond to serious crimes. And government officials say the programs can reduce costly hospitalizations and jail stays.

Dr. Margie Balfour is an associate professor of psychiatry at the University of Arizona and an administrator for Connections Health Solutions, an Arizona agency that provides crisis services. She said now is a good time for rural areas to start or improve such services. The federal government has been offering more money for the efforts, including through pandemic response funding, she said. It also recently launched the 988 crisis line, whose operators can help coordinate such services, she noted.

Balfour said the current national focus on the criminal justice system has brought more attention to how it responds to people with mental health needs. “There’s a lot of things to disagree on still with police reform,” she said. “But one thing that everybody agrees on is that law enforcement doesn’t need to be the default first responder for mental health.”

Arizona has crisis response teams available throughout the state, including in very rural regions, because settlement of a 1980s class-action lawsuit required better options for people with mental illnesses, Balfour said.

Such programs can be done outside cities with creativity and flexibility, she said. Crisis response teams should be considered just as vital as ambulance services, Balfour said, noting that no one expects police to respond in other medical emergencies, such as when someone has a heart attack or stroke.

“People with mental health concerns deserve a health response,” she said. “It’s worth it to try to figure out how to get that to the population.”