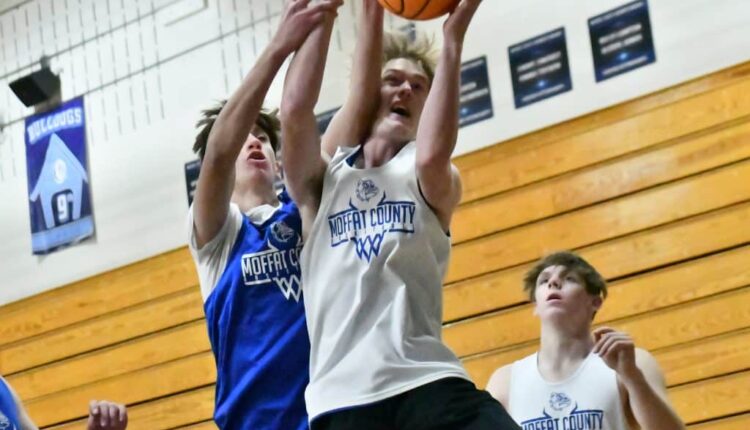 Moffat County juniors Alejandro Tarango and Evan Beaver go up for a rebound during a practice drill.
Andy Bockelman/Craig Press

Last winter marked a turnaround for Moffat County boys basketball after a string of losing seasons, and although the roster is looking different as the Bulldogs embark on a new schedule, they want to continue playing at the same level.

MoCo hoops is getting right back into the mix as the boys get ready for a quick entry into competition with their first game Tuesday, Nov. 29, at home against Vernal, Utah.

“We’re looking really good right now. The guys are super bought-in and working their tails off,” said coach Mark Carlson. “The energy has been really good for the first few days of practice.”

As a second-year head coach, Carlson said he is “100% more comfortable” than last year.

“I learned a lot, and that’s already paid dividends with feedback from the kids,” he said. “A little more structure, more conditioning, which they’re happy about, so we’re off to a good start.”

In his first time running the hoops program, Carlson put together a 13-9 record last season, the best results for the Bulldogs since 2015. Finishing third in their conference, Moffat County entered the district tournament for the first time since then and qualified for the Class 3A state playoffs.

However, this winter will come with some sizable changes.

“We’ve changed our offense a little bit since we lost five seniors who were all 6-foot-3 and bigger,” Carlson said. “We’re not near the size that we were, so it’s a lot of emphasis on defense and to push the ball and run.” With five seniors with varying levels of varsity experience this year, combined with juniors who got plentiful playing time previously, Carlson expects the bunch to be just as capable.

“One thing about this group that I’ve been impressed with so far is they just battle every single night,” he said. “They work hard against each other and don’t get upset. If somebody steals the ball from them, they’re right back at it. They just have a great mentality to work. Last year’s seniors set a great example for these guys of what they could be capable of, and they want to build on it.”

Seniors Cort Murphy and Johnny Lopez only had a brief respite from football season before getting back on the court. “I think this year we’re gonna have great D,” Lopez said. “We’ve got a lot of guys who can run up and down the floor.”

Murphy expects to carry over the dynamic of last year’s group even if it’s in a new way.

“We definitely still have a lot of talent,” he said. “(We) lost a lot of size, but we’re making up for that in speed and shooting. Either way, we’re gonna be fine.”

The Bulldogs move back up to Class 4A this season, which will see them lumped in again with Rifle, Summit and Steamboat Springs.

“It’ll be great to get that rivalry going again,” Carlson said of facing Steamboat. “We played in front of a packed house over there last year, so it’ll be exciting to play them up there and down here.”

Also noteworthy is that while Aspen girls remain at 3A, the defending state champion Skier boys will stay in the same conference as MoCo.

Even amid a perfect 27-0 run for Aspen last year, Moffat County was one of only two teams to hold the Skiers to a single-point deficit. He added that league opponents like Basalt, Coal Ridge and Delta will remain contentious.

“I told the guys at the first practice, ‘I don’t think we have a night off all year,'” Carlson said. “Every team in our league is stacked whether they’re bringing back guys from last year or just reloading.”

Making the most of Black Friday, Better Business Bureau has tips