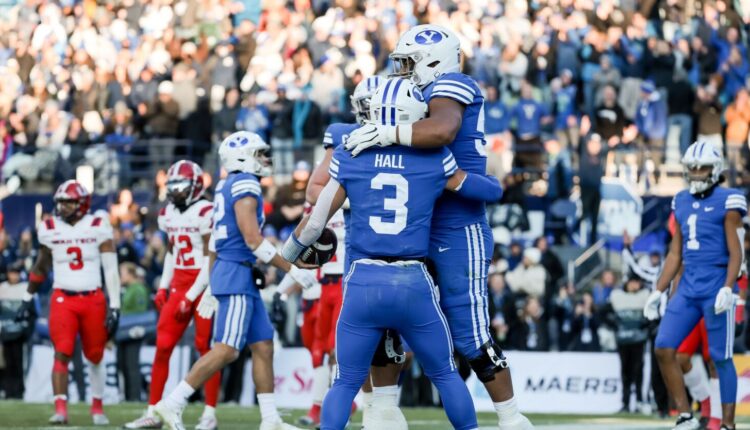 This article was first published in the Cougar Insiders newsletter. Sign up to receive the newsletter in your inbox each Tuesday night.

This week’s clash between Stanford and BYU will feature two quarterbacks who served missions for The Church of Jesus Christ of Latter-day Saints in Jaren Hall and Tanner McKee. Both were recruited by Heisman Trophy winner Ty Detmer out of high school. It will mark the final regular-season game for both teams and could set the tone for a bowl game for BYU.

Predict the score of BYU at Stanford and explain your reasoning.

Jay Drew: A few weeks ago, it appeared BYU’s regular-season finale against Stanford would carry a lot of intrigue, and the Cougars’ bowl hopes might have been on the line. But BYU took care of business at Boise State, while Stanford has stumbled as of late, and this matchup at Stanford Stadium doesn’t hold much interest for anybody except the teams themselves and their fans. And even Stanford’s fans might not show up, given that the Cardinal lost the Big Game 27-20 last week at Cal and their season is pretty much over.

Don’t be surprised if BYU fans outnumber Stanford fans, perhaps even by a 2-1 margin.

I’m predicting a BYU win because I think the Cougars have the better offense, led by Jaren Hall, and will be just good enough on defense to get a few stops, despite a lot of poor showings from that unit the entire season. Giving up 26 points to Utah Tech was inexcusable.

Dick Harmon: BYU is an interesting team that tends to play up or down to the competition, generally speaking, and that’s why this season finale will likely be filled with big plays by both offenses. I do believe BYU’s defense is capable of mustering a few more plays and Jaren Hall, Puka Nacua, Chris Brooks, Lopini Katoa and others are simply superior on offense. BYU’s receiving corps would be among the best Stanford’s defense has faced this season and they will deliver for a partisan BYU crowd in Northern California.

Of interest are some recruiting tidbits like Latter-day Saint tight end Walker Lyons, who is from nearby Folsom High, a guy who committed to Stanford. It would be nice to see BYU once again turn his head back to where his mother and father, cousin, uncles and siblings have chosen — BYU. This game matters because BYU really needs to end the season on a multiple-game win streak and bowl after sputtering to a disappointing and underachieving October with four losses.

Mark Pope saw Cougar hoops register wins over Missouri State and Nicholls this past week before heading off to The Bahamas. BYU used a last-second bank shot by freshman Dallin Hall in the final seconds to defeat Missouri State in the Marriott Center. A strong second helped prove the key to the win over Nicholls.

BYU’s football win over Utah Tech began with frustration and fireworks from the Trailblazers, but Jaren Hall’s five-TD passing performance highlighted the day. The win qualified the Cougars for a bowl game. A Utah Tech player provided some locker room fodder.

I’ll have to see when, if ever, BYU has gone an entire season without the backup QB throwing a pass. Hasn’t happened at least as far back as 1999.

Players have 2 choices: either pout or prepare. Whether you play or don’t play, whether you win or lose, you will never regret working hard, making commitments, being disciplined or focusing too much. These skills not only prepare you for your game, but will prepare you for life!

Good coaches replace staff when underperforming. Sitake is loyal to a fault. We will soon find out whether his coaches are just a good old buddy network, or whether Sitake has what is best for team as his highest priority.

(Sitake) is the head coach, if he doesn’t like what is happening on defense or offense he should change it right then. He never did, they continued to rush three and put one guy back so far he needed binoculars to see the play. We can blame the defensive coordinator all we want, but if Sitake doesn’t insist on scheme change then he approves it. The Y doesn’t have a talent issue, they have coaching issues. Poor clock managers, too much confusion leading to delay of game, too many fourth and go-on-a-wish. The poor coaching mentality falls directly on the head coach. BYU gave him big boy pants to wear he just hadn’t learned how they go on yet. Like trying to put your first football uniform together.

BYU guard Dallin Hall and teammates celebrate Hall’s game winner against Missouri State at the Marriott Center in Provo on Wednesday, Nov. 16, 2022. The Cougars are off to The Bahamas this week to compete in the prestigious Battle 4 Atlantis tourney.