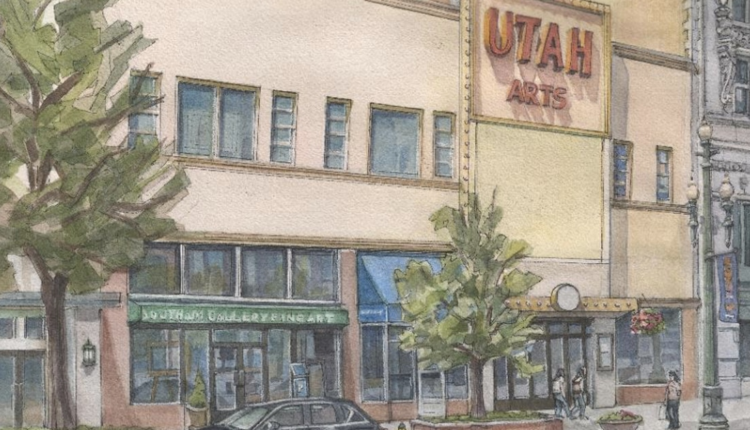 For another day in the 103 year old life of the rundown Utah Theater in Salt Lake City, Wednesday presented a drama worthy of its stage.

Michael Valentine, a film buff who went on a brief hunger strike outside the closed theater in June, was arrested Wednesday night for trespassing after entering the building on a sit-in and showing a film to protest the imminent demolition of the theater.

A co-protester with Save The Utah Pantages, Casey McDonough, said Valentine was setting chairs in the theater’s marbled entrance to show his self-made documentary claiming the city’s corruption will seal its fate when police showed up.

The officers were cordial, said McDonough. They threw everyone else out of the vacated building and released them, but handcuffed Valentine and took him into custody, he said. Salt Lake County Jail records show that Valentine was eventually released without bail.

“Free at last!” Valentine later joked after being released around 1am on Thursday and running five miles home.

Almost 30 witnesses asked the city to rescue and reuse the building instead during the lengthy hearing. The 6: 1 vote of the commission for the drafts of the developer Hines is an important step in the beginning of years of negotiations over the high-rise project – and the final destruction of the theater – with the redevelopment agency of the city.

Mayor Erin Mendenhall has said the deal to turn the theater over to Hines for $ 0 in exchange for up to 40 affordable apartments, Pocket Park and other amenities is nearing closure – despite remaining opposition.

The Commission’s debate, which lasted late into the evening, instead focused on plans by international developer Hines to build the 150 Main Street Apartments on the site, comprising 400 studio, one-, two- and three-bedroom apartments, 8,400 square meters of floor space – Retail space, the new Pocket Park and the sidewalk facing Regent Street.

The park, which is to be built on a parking lot, will be accessible via stairs or an elevator north of the lobby of the skyscraper and, according to construction plans, will have an extensive lawn, gardens, a sloping amphitheater and a wooded area. The construction will also extend a walkway in the center of the block to the west into the block for public access to the park on Main Street.

“Our intent is to make the space a place where everyone can go and enjoy,” said Dusty Harris, senior managing director at Hines, owner of the adjacent Kearns Building.

Proponents of the high-rise say it will revitalize the entire downtown block and adjacent intersection, create a new green space in a neighborhood that it needs, and bring affordable housing to a luxury tower.

City officials recommended design approval, and several commissioners said that while they sympathized with the theater fans, they welcomed Hine’s plans. The panel set conditions for lighting, signage, tree maintenance and ensuring public access to the private park before it was cleared.

“I am very excited to have another large building in our city center,” said Commissioner Sara Urquhart, who lives half a block away. “It’s the vibrancy, the excitement that we see when more people are on the streets, more people are walking, more bars and restaurants are opening.”

The old theater “is an eyesore and it’s dangerous,” she said. “As a neighbor, I say ‘Hallelujah!'”

The only vote against came from Commissioner Amy Barry, who feared the 150 South Main Apartments would be too high and that their first floor would not blend in well with the surrounding streetscape.

The hour-long hearing had little legal impact on the decision to destroy the crumbling theater. This plan was initiated at the end of 2019 by the then mayor Jackie Biskupski and the city council. Nevertheless, people from all over the country called the city administration and Hines with renewed and passionate requests to save the landmark or integrate it into the new tower.

“We just want to express our disappointment and frustration with the actions of the city,” said Kelsey Moss, representative of the nonprofit Preservation Utah, which has resisted repeatedly. “We are deeply saddened that the city is allowing such a lively and unique architectural space to be demolished in the heart of the city center.”

Studies of ways to restore and reuse the city’s theater found an estimated cost of $ 35 million to $ 60 million, which was deemed far too expensive by elected leaders. And although it has been out of order for more than two decades and has been badly water-damaged, opponents lamented sending the theater into oblivion, the loss of its character, distinctive architecture and historical charm.

HGTV celebrity presenter Nicole Curtis berated commissioners on Wednesday for not stopping the fall of the theater and for finding an environmentally friendly way to adapt and reuse it. Curtis, who specializes in renovating buildings, also criticized the environmental impact that demolishing the old neoclassical playhouse could have.

“You are all voting for all of this to end up in a landfill,” she told them over the conference call. “It’s anything but green. The greenest building is what is still standing. “

Brenda Case Scheer, who heads the planning commission, noted that an existing city master plan for the area included a conversion of the theater, but a lawyer from Hines called this “Fantasy Land”.

“This design,” said attorney Bruce Baird, “just doesn’t work in the real world or from an economic point of view.”

Mendenhall and city RDA officials have announced that their final signing of the deal with Hines is likely to take place in the coming months.