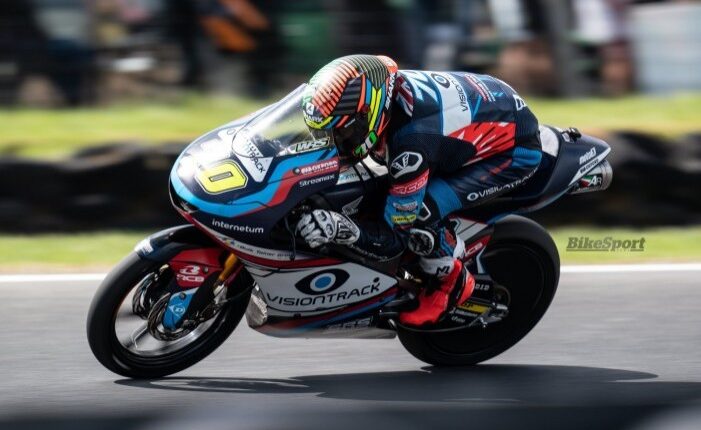 A weekend of variable weather conditions, the norm for the island location on the Bass Straight, meant Whatley and teammate Scott Ogden had a task on their hands to learn the fast and flowing Australian circuit with Ogden up to speed quickly as he completed Friday practice 13th in the combined times. Saturday saw the pair qualify ten places apart in the dry running with the number 19 rider securing a 19th place start for his 19th birthday.

With the race briefly delayed due to late morning showers, strong winds dried the 4.5km track quickly as the pack set out on slick Dunlop tires. However, Ogden fell foul of a wet patch at turn three as the race hit half distance, a 130mph highside leaving the Doncaster rider sore but relatively unscathed.

Whatley dug deep for one of his best rides of the season, bridging the gap to the group in front and enjoying a race-long battle before meeting the flag in 21st position.

“It was a really fun race,” Whatley confirmed as he left Australia. “It’s the first time I’ve been able to fight with the group in front which finally shows the progress we’ve been making. It’s given me a lot of motivation going into the next race.”

“I’m annoyed that I crashed out as I’d felt really strong all weekend until then,” Birthday boy Ogden admitted. “I was sore after my crash but I’m hoping to be okay to ride this weekend in Sepang.”

Don’t Drill Your Own Teeth! And Quashing Other Rotten Dental Advice on TikTok

Island Fin Poké Co. is Bringing the Taste and Culture of Hawaii To Salt Lake City, Utah for The First Time Ever