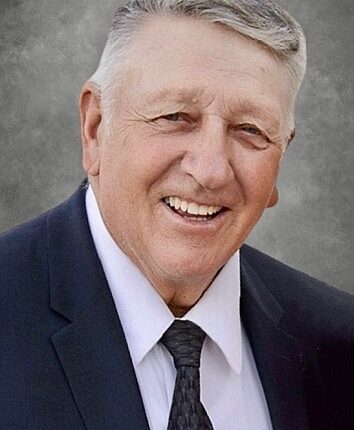 Ned B. Hirz (Bampa), of Moses Lake, WA passed away peacefully in his home surrounded by loved ones on Saturday, July 30, 2022, at the age of 82. He was born April 24, 1940, in Van Tassell, Wyoming to Harry and Margaret Hirz. He had 8 sisters and 2 brothers. He was raised on the prairie in Wyoming. He moved to Colfax, California at age six where he worked on the family farm. He attended college in Rocklin, California.

He married his sweetheart Deanna Cuthbertson on June 11, 1960, and were sealed for time and all eternity in the Los Angeles Temple. They moved to Grass Valley, CA in 1961 where he owned and operated a service/tire station. In March of 1966, Ned and Deanna moved to Moses Lake, Washington after purchasing a farm in the block 40 area. Together, Ned and Deanna raised six children on the farm and taught them the value of hard work and how to have fun working together. He also worked at U&I Sugar during the winter months. His motto “Go Slow, Keep Cool, and Drink Plenty of Water,” defines how he went slow and enjoyed life, how he kept calm and was slow to anger, and drank plenty of water, the living waters of Jesus Christ.

Ned became a member of the Church of Jesus Christ of Latter-day Saints in 1960 at the age of 20. He faithfully served in the church throughout his entire life. Ned was a member of the Seventy, High Council, and served in multiple bishoprics. He served as a Bishop, a temple worker in the Seattle Temple, and served in many other areas of the church. He truly loved to associate with people. He will be remembered for his kindness, love, and example of compassion. He never complained no matter how tough things were in his life.

Ned (Bampa), valued family gatherings, he enjoyed watching his children and grandchildren play sports. He loved to pull pranks on his siblings and his children (who also pulled pranks on him). He valued one on one time with everyone just to generally see how they were doing and always offered good sound counsel.

Services will be held on Monday, August 8th, 2022, at 10:00 am at the LDS Nelson Rd Chapel on 1849 Nelson Road NE, Moses Lake, WA. Bishop Bruce Hirz will be officiating. Interment will follow at Pioneer Memorial Gardens in Moses Lake, WA.

He left a great legacy that will be carried on. He was a faithful man of God and will be deeply missed by all who knew and loved him.

Dad (Bampa) We love you!

Down but still strong, close to 80% support Salt Lake City Olympic bid according to new poll