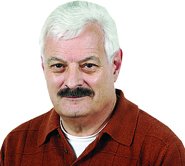 How old is too old For example, too old for a new job?

When a person reaches senior status, it appears that there are few job opportunities.

I remember many years ago as the district sales manager for a major mill supplier in Houston, I interviewed Earl Schilling, who was 54 at the time. Our average new hire was in his thirties, so Earl was an old man, but I could see he would be a hard-working, reliable salesman, and he was until he reached retirement age about 12 years later.

I was recently told that an OLD friend of mine, Jay Harmon, has just started a new job.

A new job at 90? Yes, and if you knew Jay like Sharon and I did, you would understand.

Jay has always been a daredevil, until recently he worked as a salesman for a large commercial window cleaning company.

Jay is an example of how to stay fit in old age. He tracks every exercise and step he takes and does more sit-ups each morning than I have in my entire life.

His goal while walking is to count about 15,000 steps a day. He doesn’t take any medication – not even aspirin.

Sharon and I met Jay over 60 years ago when he and I were young pups. Jay was the sales director for the Kirby vacuum cleaner company in Provo, Utah, and trained me. We quickly became friends and have remained so to this day.

Jay moved to the Denver area from Utah possibly 35 years ago and had to start over after some financial troubles. In fact, I was able to find him a job in one of the departments in the company that I worked for for 30 years. When I left the Kirby store because Jay’s wife Glynn (now deceased) and Sharon were good friends, Jay and Glynn hired her as a secretary in the Kirby Provo office.

They had a fun relationship. Sharon was a hard working girl, but Glynn loved shopping, and who better to shop with than your best friend? So on some days the couple were out for lunch and some shopping. For Sharon it was a fun side benefit.

When I retired and we moved to Colorado, we reconnected. It’s always been fun.

We went to Jay’s 80th birthday party 10 years ago and he was still working for the window cleaning company and had no plans to retire.

Glynn died a few years ago and we attended her funeral. It was a sad business as they had been married for over 60 years.

A little over a year ago Jay drove to our Loveland home and we had a lovely lunch and visit. He was still selling.

A few days ago we learned that Jay had given up the window cleaning business.

No, he’s started a new job working for a Freddie’s restaurant in the Denver area!

Colorado Edition: Print in the Mountains