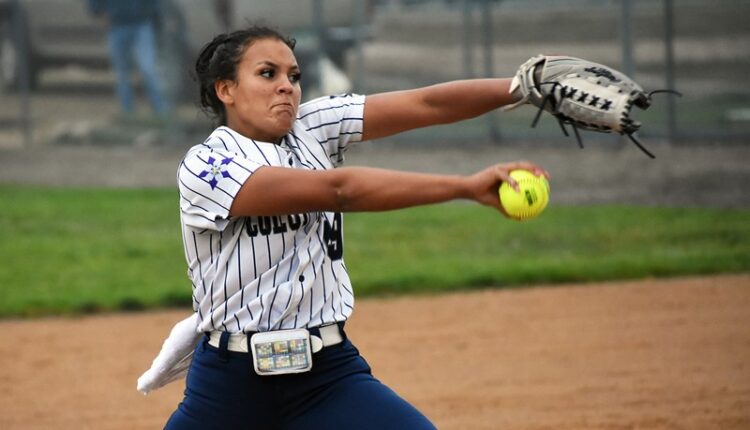 Pitcher Araya Ogden and catcher Eva Martinez combined to go 6-for-6 from the plate with 7 RBIs, along with a home run each as the top ranked team in 5A stayed undefeated on the season. No. 1 Columbine defeated Ralston Valley 12-0 in four innings.

“We come in thinking that each game is the biggest game we are going to play,” Martinez said of the focus of the Rebels through the current 16-game winning streak. “Today we were all on it. We knew we had to take care of business.”

Columbine’s offense was on it early. Ogden blasted a 2-run home run to help herself out at the plate.

“I just went up with my usual approach of hitting the first pitch. I did miss that pitch,” Ogden said. “On the full count I just swung and it went over. That’s usually how it goes with home runs.”

Ogden had RBI singles in the second and fourth innings to have a perfect 3-for-3 day at the plate. She was also solid in the circle despite admitting that she “hates” pitching in the rain. Ogden scattered five hits as the Mustangs (7-9, 1-2) stranded seven runners on the bases.

“I think this was our most complete victory,” Columbine coach Jim Santaniello said. “We hit the ball well. We fielded the ball well and we always got great pitching. All three facets were right there today.”

Martinez kept the Rebels’ offense clicking in the second inning with her second double of the game. Columbine had a 4-run second inning while posting six hits in the inning off Ralston Valley starting pitcher Ellie Uhl.

Columbine’s catcher helped put the game away in the bottom of the fourth inning. Martinez belted a 2-run home run to give the Rebels a 10-0 lead.

“With (Ogden) hitting great in front of me it inspires me to hit great and then everyone else,” Martinez said. “The attitude here is we take care of each other.”

With the rain picking up, Columbine ended the game with a walk-off 2-run single by junior Kenzie Sobieski who came in to pinch-hit in the bottom of the fourth inning. Sobieski looped a ball into short left field that scored Nine Vargas and Katie Forbes to induce the 12-run mercy rule through fourth innings.

“I wish I could draw it up like that,” Santaniello said of Sobieski with the walk-off hit. “We try to have a real team mentality and anytime we get a chance to incorporate players off the bench we’ll do that. Kenzie came in and did a great job ending the game.”

Columbine is back in action next Monday with a road game against Cherokee Trail. The Rebels then host Valor on Wednesday, Sept. 28, in a game that could very well determine the league champion.

“We definitely know we have some big games coming up,” Martinez said of the showdown against Valor next week and rival Chatfield on Oct. 6. “We know that if we keep playing like we do and bring our ‘A’ game nobody can beat us except ourselves.”

Ralston Valley is scheduled to head back down to south Jeffco tomorrow (Thursday, Sept. 22) to face Dakota Ridge.

Buy and Bust: After Platinum Health Took Control of Noble Sites, All Hospital Workers Were Fired