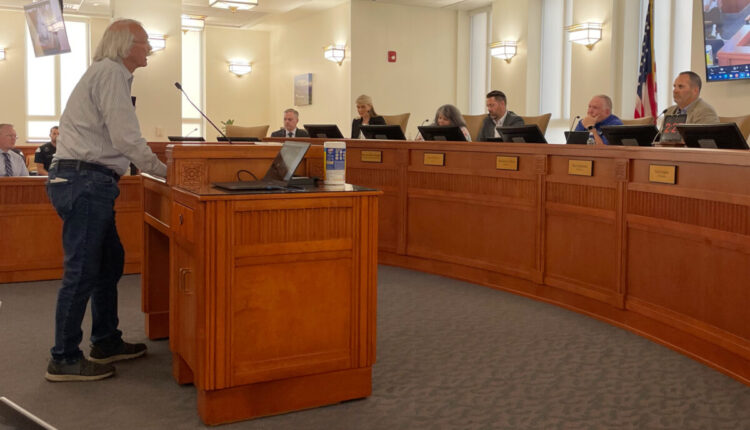 Ogden resident Joe Bauman addresses the Ogden City Council at a hearing on the city’s proposed 2023 budget and tax hike on July 12, 2022. Another hearing is set for Tuesday, Aug. 2, 2022.

Ogden resident Joe Bauman addresses the Ogden City Council at a hearing on the city’s proposed 2023 budget and tax hike on July 12, 2022. Another hearing is set for Tuesday, Aug. 2, 2022.

OGDEN — With several property tax hikes in the works, the last chance for many to speak up is fast approaching.

Leaders from Ogden, Harrisville and other locales have already had public meetings on proposed tax increases for 2023 as they craft their spending plans for the year, but final pubic hearings on the matter for those two cities are set for next week. Likewise, the formal truth-in-taxation hearings related to proposed increases in the Weber School District, South Ogden and the Weber Basin Water Conservancy District are also set.

First off, here are hearing dates, times and locations:

Now a few particulars on what’s going on:

Now the City Council is also mulling an alternative to boost taxes by just 16.82%, according to the information packet for next Tuesdays’ meeting. “The council stipulated that any adjustments to the budget could not impact employee salary and benefit increases which are a priority for the council,” the packet reads.

The proposed pay hikes behind the property tax hike amount to 14% for firefighters, 13% for general city employees and 8% for police. Elected officials were to get a 13% hike, per the original budget proposal, but now city officials are moving away from that. Instead, two pay proposals will be up for consideration with regard to the mayor and City Council members — a 4% pay hike or no pay hike.

The City Council approved a rule change on July 12 leeway them in setting their distinct salary giving from other workers, paving the way for the alternative pay proposals. Some officials were apparently uneasy with giving themselves 13% pay increases.

Growth in the city and the resulting increase in demands for city services figure in the proposed increase. “Now with nine proposed developments and a significant increase in households, both single-family and mixed-use developments, there is need for additional staffing and resources to maintain services through public safety, utilities, facilities, road maintenance and repair,” reads a website prepared by the city on the proposal.

South Ogden: The proposed hike in South Ogden would boost property tax collections for 2023 to $4.18 million, up $345,251 or 9% from the $3.83 million the city would otherwise be able to collect, according to data from the Weber County Clerk-Auditor’s office.

Mayor Russell Porter noted that modest tax hikes by city officials in recent years have precluded the need for a large hike, as proposed in some other locales. He said City Council members could even scale back the proposed hike.

“A lot of it’s just trying to keep up with inflation, especially the price of fuel,” he said.

Weber School District: The district proposal as originally put forth calls for a 13.7% increase in taxes, from $70.15 million to $79.76 million.

Weber Basin Water Conservancy District: The water district, which operates in five Northern Utah counties, is proposing a total of $17 million in property tax collections across its coverage area, up from $10.6 million for 2022, an increase of around 60%.

The increased revenue is needed to help with continued bond payments to the feds for construction of the vast district water system in the 1950s and 1960s and for upgrade efforts, according to Scott Paxman, the district’s general manager.

“Hundreds of millions of dollars” in rehab work is needed across the system, and the upgrade work will “continue for a long time,” Paxman said.

Other entities proposing tax hikes in Weber County are North Ogden, Riverdale, Roy and the North View Fire District. Truth-in-taxation hearings for their proposed increases will be held later in August.