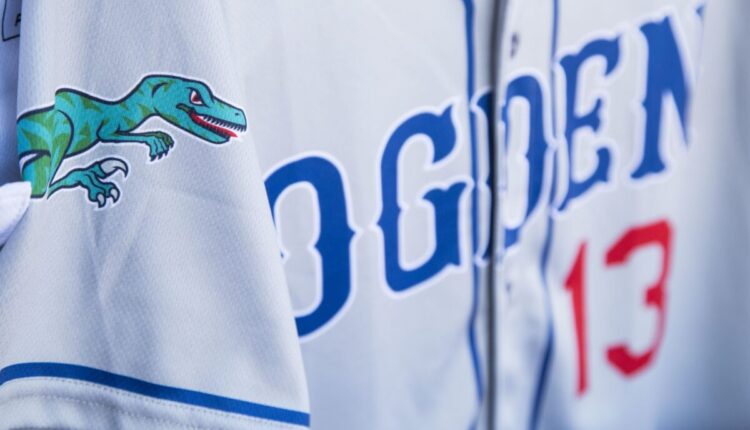 The Ogden Raptors and Grand Junction Rockies were locked in another low-scoring battle Thursday night before Josh Broughton got things going yet again.

Ogden’s leadoff man tripled to lead off the top of the eighth inning, turning a 3-2 deficit into a 7-4 win for the Raptors at Suplizio Field — ending Grand Junction’s six-game win streak and keeping Ogden’s losing streak from reaching four games .

Broughton led off Wednesday’s game with a triple, then returned Thursday to lead off the contest with a double in the first (he scored on a wild pitch for an early 1-0 lead).

So in Thursday’s eighth, he tripled again with his team down a run. Jesus Valdez scored Broughton with a single to tie it 3-3, then got cleared when caught trying to steal second. That appeared somewhat costly when Reese Alexiades followed with a solo homer to put the Raptors (37-26, 8-7) ahead 4-3.

Ogden kept it going in the ninth when Grand Junction (37-26, 11-4) went to Kyler Patterson on the mound. Outfielder Brian Dansereau cracked a solo homer to lead off the inning, then Dakota Conners doubled and scored on a Sonny Ulliana single to make it 6-3 before GJ could record an out. Pitcher Christian Day pinch-ran for Ulliana, moved over to third base on a pair of outs, and scored on a Pat Adams single for a 7-3 score.

Grand Junction made the bottom of the ninth notable by scoring a run against Ogden nearer Jackson Lancaster, who pitched on back-to-back nights. Lancaster surrendered only one hit but walked two and gave up his first earned run of the season on a sacrifice fly.

Lancaster’s season totals are now a 0.59 ERA, allowing one earned run and six hits in 15 1/3 innings while striking out 27 and walking 10.

Dansereau hit 3 for 4 and Broughton was 2 for 5, each scoring twice. Six different raptors drove in one run apiece. Jake Mulholland got the win, throwing 1 1/3 scoreless to finish the seventh and complete the eighth. Riley Ottesen threw a solid six innings in his start, giving up two runs on five hits, striking out six.

The two teams continue the series at 5:35 pm Friday.

Skin Cancer Is a Risk No Matter the Skin Tone. But It May Be Overlooked in People With Dark Skin.